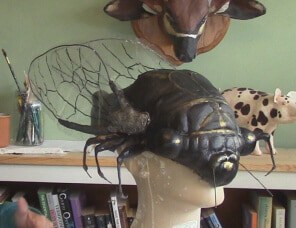 Do you ever start a project that just keeps getting out of control? And then you wonder why you started in the first place?

Well, I think my Cicada mask would qualify. In fact, it has a starring role in a video I called “Is This the Craziest Thing I’ve ever Made?“

From the comments I received on that video, I learned that people actually liked this silly bug mask. 🙂

But still, I won’t be wearing the bug on my head when I answer the door this Halloween (too scary-looking for babies, I think) – but I do love those wings.

>Video 1 – finding the dead cicada and starting the clay model.

I  think it would be fun to start over and make something for Halloween with just the bug’s wings. Maybe they could be attached to a plastic headband so they flow back over the head, or attach them to the back of a costume to make a fairy. That would be a one-hour project, and it wouldn’t scare the neighbor’s kids.

I kept looking at my mask book sitting over on the shelf and wondered why I didn’t follow my own instructions? The silly thing would have been done ages ago, and it would have come out a lot better better.

The shop towel mache would be lighter than the plaster cloth, and if I started out with a plan to make the entire bug, the proportions would have been better.

Ah well – we can’t expect every project to come out perfect, can we?

31 thoughts on “Cicada Bug Mask Gets His Wings – Video 4”