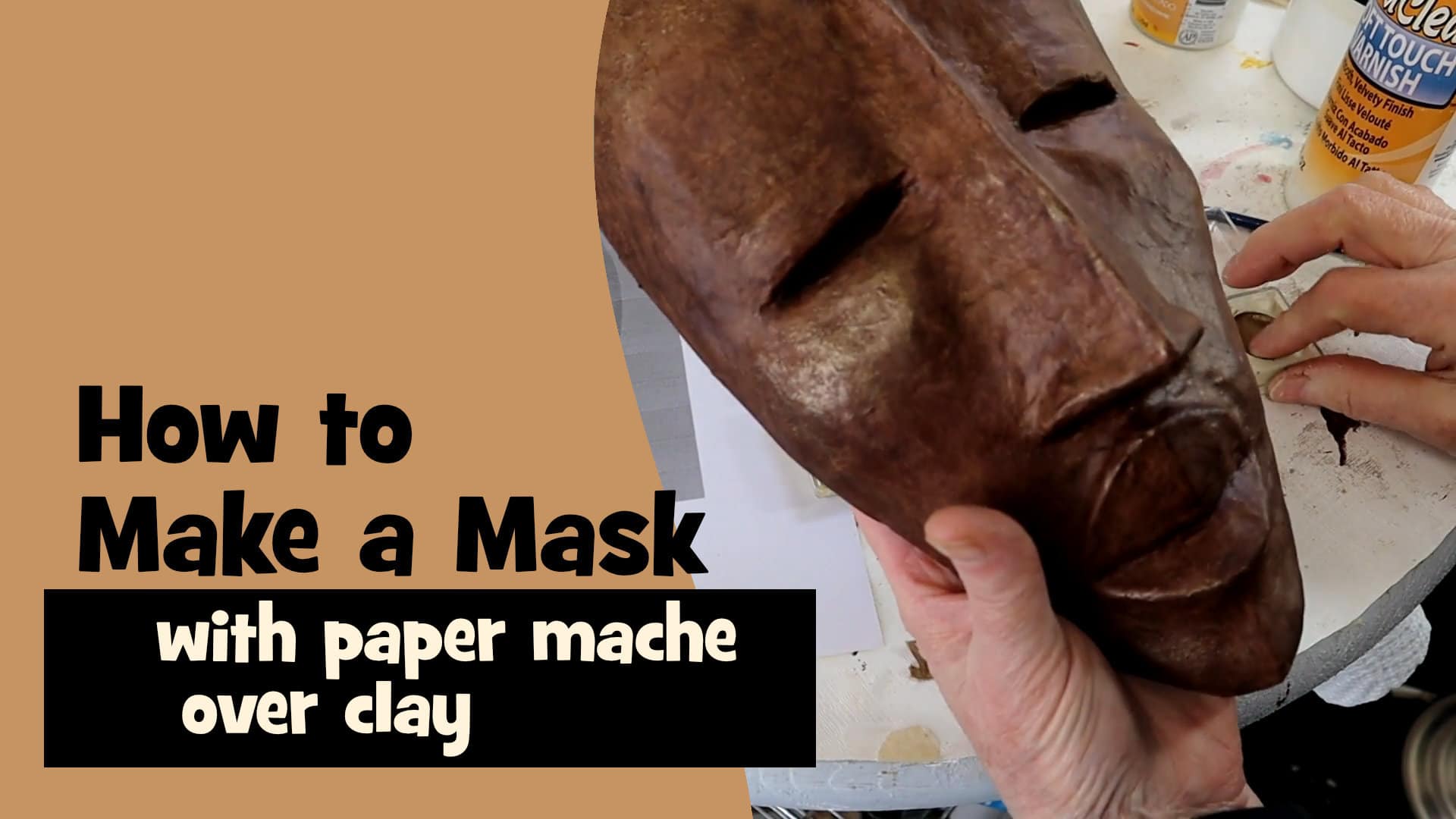 Make a paper mache mask with four layers of paper strips and paste.

My model was a mask from the Ivory Coast that was created over 100 years ago. I was captivated by the simplicity of the original mask, and by the way the artist added just a hint of character with a slightly crooked smile. That made it feel like I was sculpting a portrait of a real person when I made the clay form.

If you have an African-themed decor, you might want to check out my African animal pattern set, too. 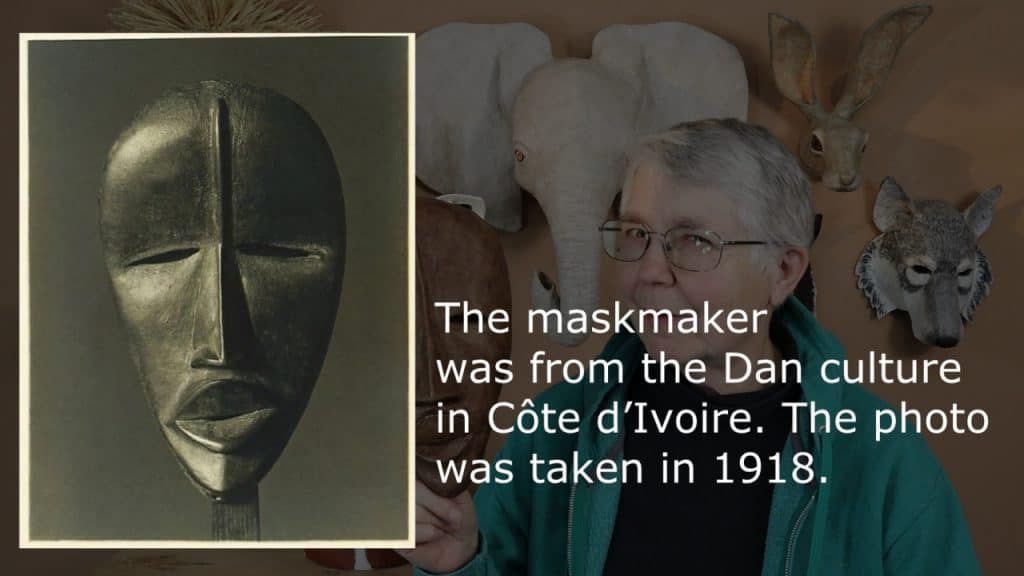 Do a Google image search for “African Mask Dan” to see masks that are similar to the one I chose for my model. If you’d like to get started sculpting faces but you’re a little nervous about “getting it right,” this would be a perfect project to get you started.

For this project I used Elmer’s Art Paste – but the cooked flour and water paste is also transparent and it would work just fine. If you’d like to try out the Elmer’s Art Paste, you can find it here. 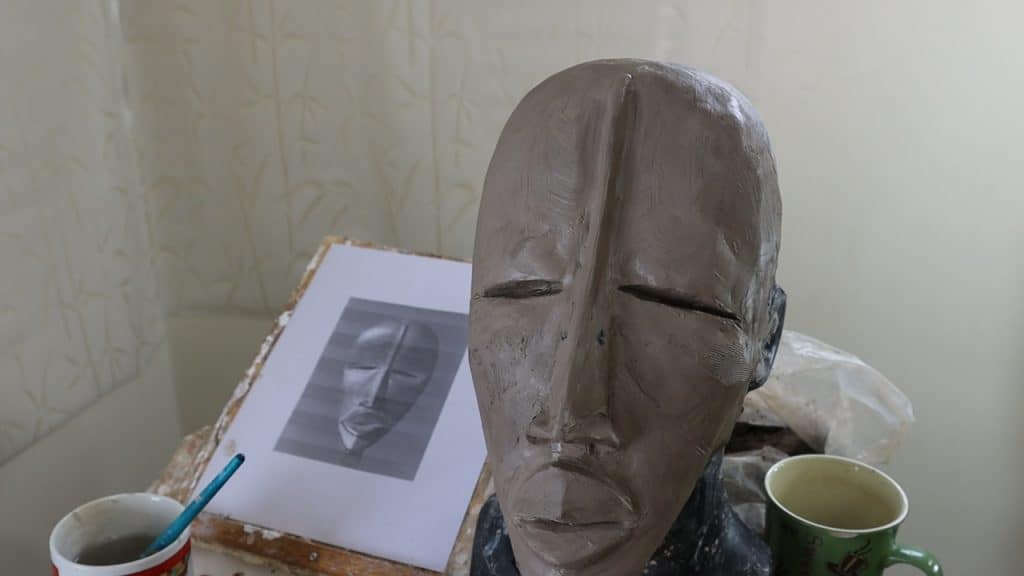 I used my WED clay (a wet clay), because I had some and I like using it. It worked for this particular African mask because there were simple shapes and I could isolate the clay from the paper mache with a film of plastic.

It would be easier to use some oil-based modeling clay, like the Sargent’s Plastilina that I used for my Halloween portrait mask. The oil-based clay stays soft, so it’s easier to get it out of the dried paper mache.

To sculpt my model, I put the clay over my mannequin, but a simple form made with crumpled foil or paper and masking tape would work just as well. The one problem with using a commercial form or mannequin is the nose – this particular mask has a very narrow nose, but mine is wider because of the hard plastic nose under the clay. In the end, I really don’t think it mattered that much.

My sculpt is not an exact match for the original mask, but it came fairly close.

Step 2: The plastic or release. 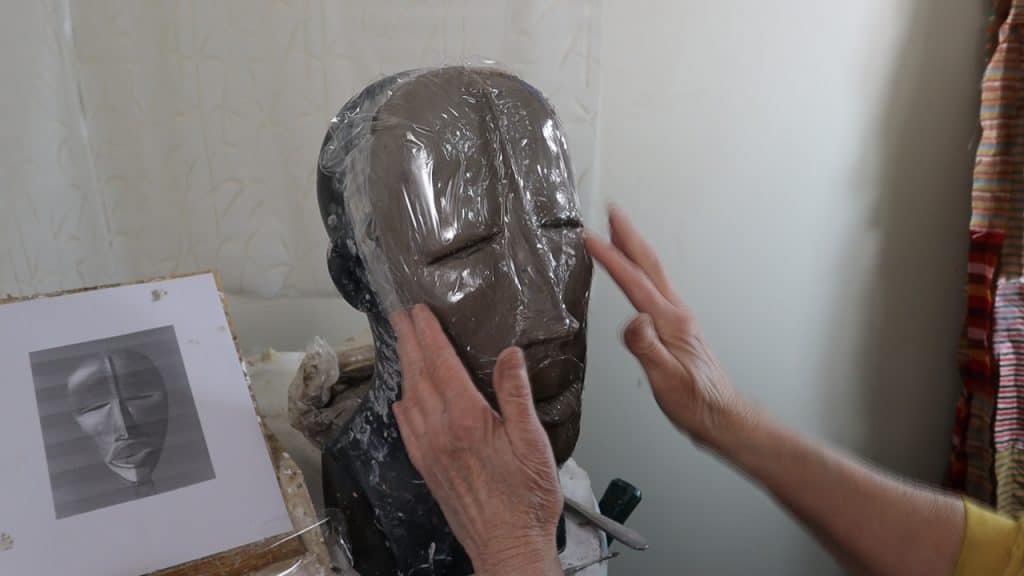 Because I was using wet clay, I needed to cover it before adding the paper mache. I use plastic wrap that I stole from the kitchen.

If you make your form with an oil based clay, you don’t need the plastic. However, it will really help if you use a thin film of petroleum jelly to make the dried paper mache come off easily. 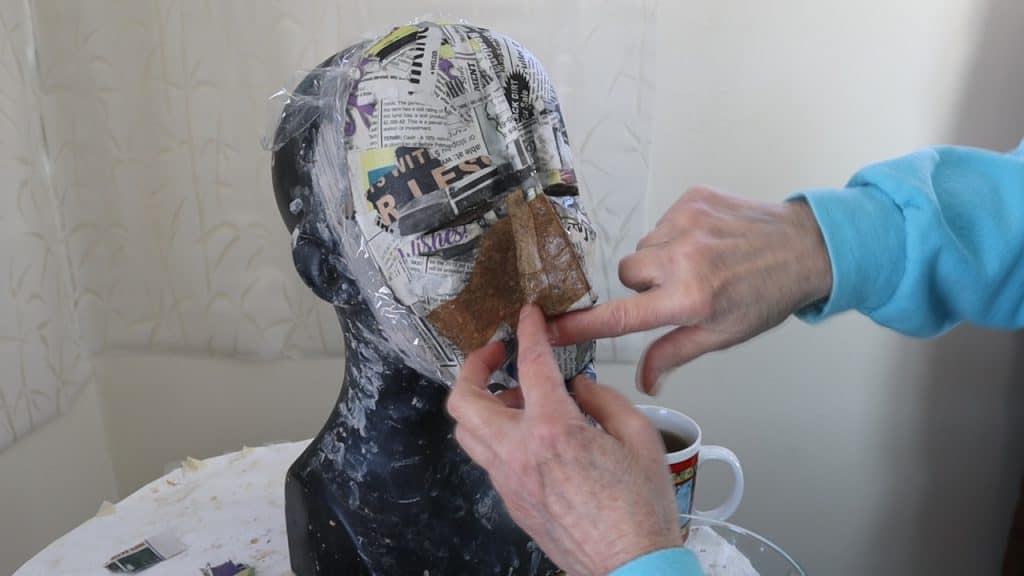 I used four layers of torn paper strips, held on with the Elmer’s Art Paste. I wanted the brown paper to show on the final mask, so I needed a paste that dries clear. You could also use a cooked flour and water paste, because it’s clear after it dries.

I started with newspaper for the first layer, and let it dry. Then I added brown paper that came with a package from Amazon.com. One more layer of newspaper, and then the final layer of brown paper.

The mask is quite strong, even though I only used four layers.

Step 4: Remove the mask from the clay form. 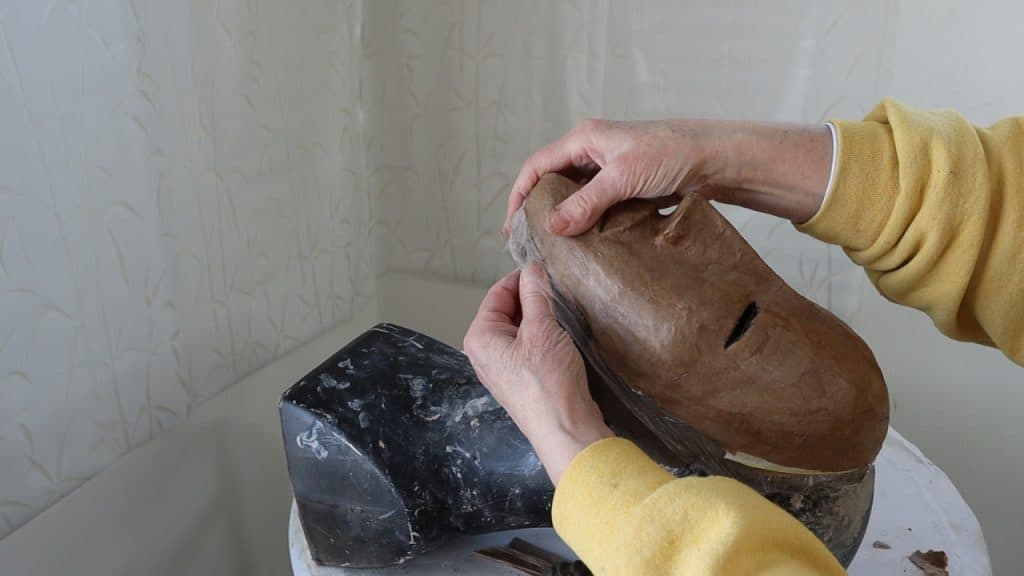 You need to do this carefully, and be sure to wait until the paper mache is entirely dry, all the way through. If you try to remove the paper mache too soon, you could ruin your mask. 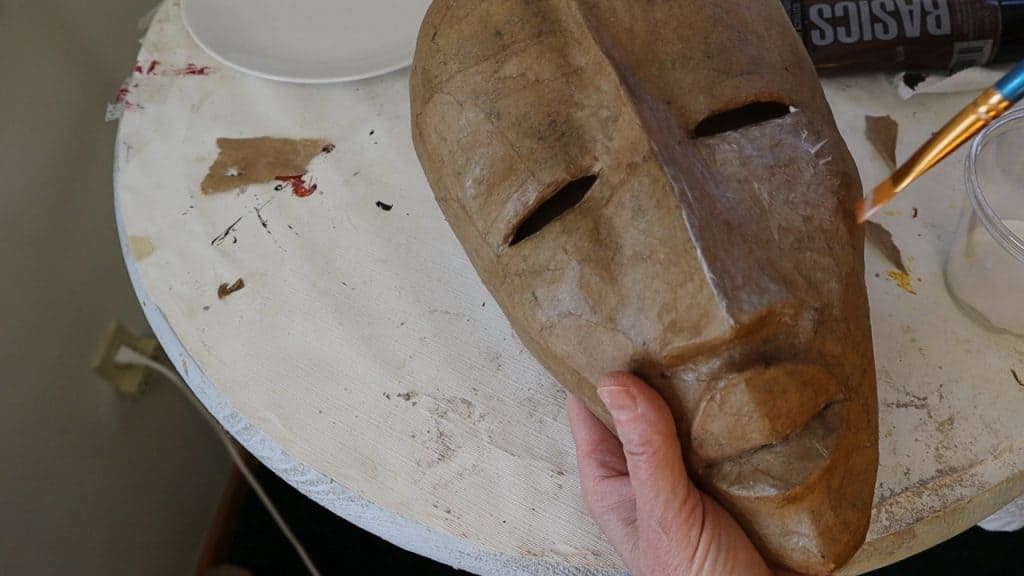 I used clear gesso to seal the paper mache, to make sure my acrylic paint would go on evenly. Sometimes the paper mache will absorb paint more in one area than another, and you end up with a blotchy finish. The gesso keeps this from happening. 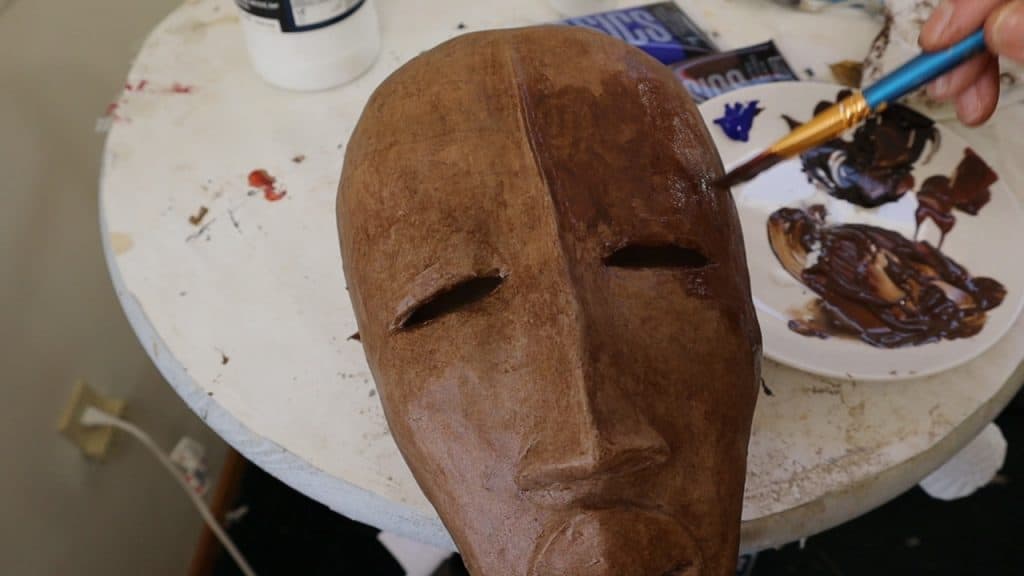 I wanted my paper mache African mask to look like it was made with a warm dark wood. I mixed:

I don’t think the copper made much difference, although it may have given the brown a reddish tint. The glazing liquid makes the paint transparent, and it slows down the drying time. 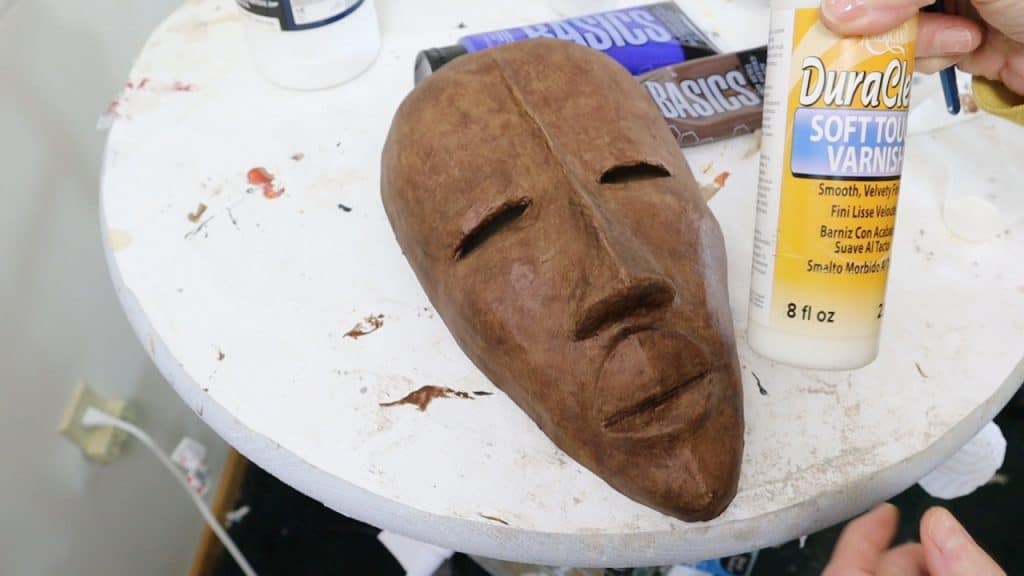 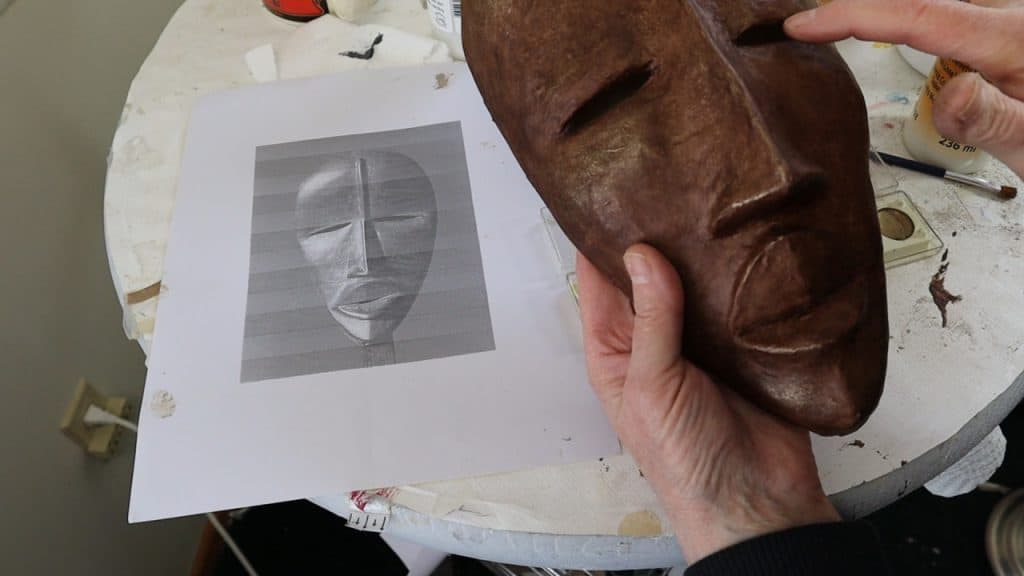 I’ve had this set of metallic colored wax for 20 years or more, and rarely get a chance to use them. I have fun with them when I do have a good excuse, and this seemed like as good an excuse as any.

I used the burnished gold sparingly, in the areas that are brightest on the photo of the original African Mask from the Ivory Coast. 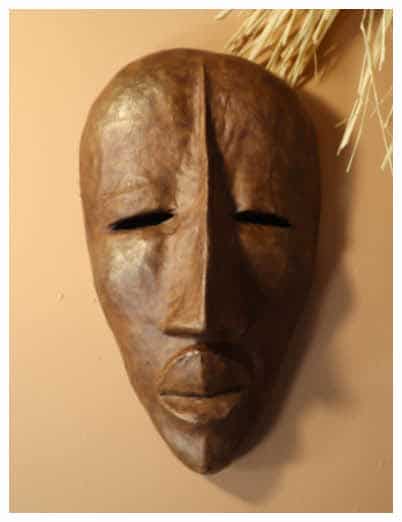 One of my reasons for chosing this project was to try out the Elmer’s Art Paste that I told you about in my last post.

After that post I got a lot of questions about the paste, especially on my YouTube channel. In this video I answered the two most common questions, and my answers are …

Can you sand it? Yes.

Can you use the Elmer’s Art Paste as a substitute for the white glue in my paper mache clay recipe? No, sorry. It doesn’t dry hard and strong like paper mache clay should – in fact, you’d have the same result if you just used water instead of glue. It didn’t work. 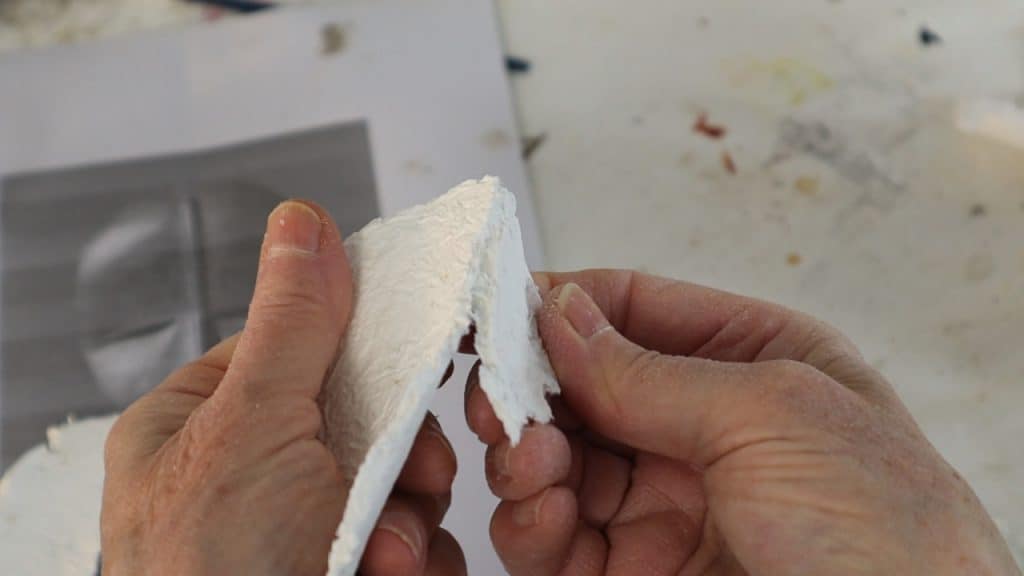 I think a project like this would be perfect for a Middle School or High School class, especially if the artwork as combined with a creative writing, history or social studies class.

While I was sculpting this mask I couldn’t help but wonder what the original artist’s life was like. It made me want to know more about the Dan culture of West Africa, and the other artistic traditions of the area. A project like this can make learning fun.

Have you made a paper mache African mask, or a copy of a traditional art form from another culture? If you have, we’d love to hear about it. 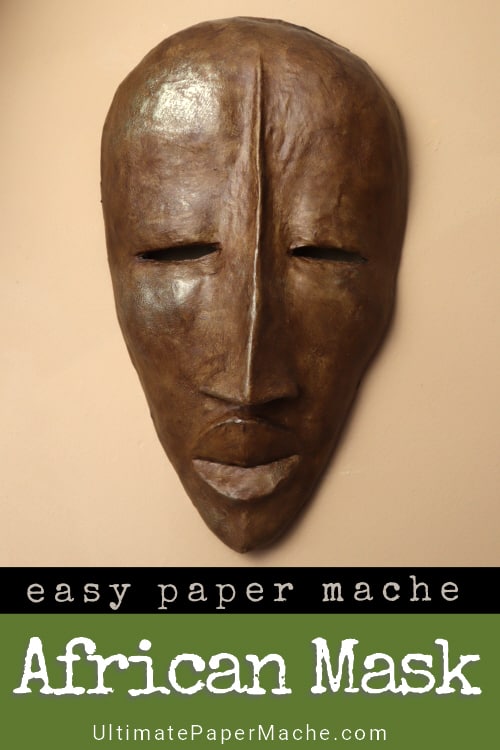