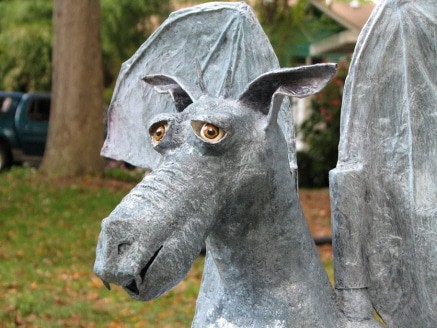 Bmaskmaker sent in her wonderful paper mache gargoyle for our Halloween Mask Party. Not a mask, I know, but definitely Halloween. In fact, with that expression on his face he’s really too sweet to hide away for the rest of the year. I’ll let her take it from here:

Here’s last year’s gargoyle. He was the ‘Trick or Treat’ part of the “Trick or Treat — Smell My Feet — Give Me Something Good To Eat” display I did last year. It’s the same theme this year, there’s just more and several items are getting upgrades.

I followed Stolloween’s (www.stolloween.com) Gargoyle tutorial mostly, so the body is 1 liter soda bottles, and the rest is built out of newspaper tubes, crumpled newspaper, cardboard and boxboard.

I followed your instructions for painting the eyes, and ended up using a paper mache balloon form for the face (which is a Dan Reeder technique).

There are a couple versions of clay on him, but I ended up with a version that I use regularly now that is based on a combination of your recipe, Scott’s recipe, but I use Methyl Cellulose instead of flour as my base.

He took a long time to make because I was learning on him, but I’ve making a second one, which will take me about 10-15 hours by the time it’s done. (Not including drying time). That’s spread over a couple of weeks, but it could be done faster if it was the only thing you were working on. I’m never only working on one thing.

Total cost is a wild guess.

Plastic bottles, newspaper, cardboard and boxboard were all free.
A batch of clay for me is about 5lbs of clay, which costs less than $5 to make.
Add in the cost of paints and a couple of coats of varnish … maybe $5 dollars, plus or minus?

Thanks for sharing, Bmaskmaker! Now, for a view of the gargoyle in progress:

And here he is a longer view:

The thing I like most about this project, aside from the great job she did, is the way she combined the techniques from so many different sources, and made them uniquely her own.