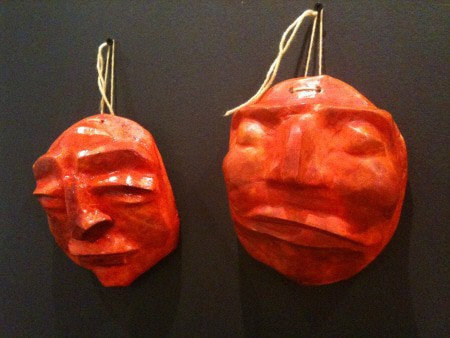 These masks were made with paper mache clay by Mark Morse. The masks looked like this before finishing:

I have also included some others. I was especially fond of the little monk as I used the the card board toilet paper tube as its frame. So its really one complete roll of toilet paper. Also some attempts to make my own Japanese Daruma dolls.

My own recent paper mache attempts have revolved around a traditional Japanese doll, called a Daruma. He is based on a historical figure who was a stoic Buddhist mediator, who’s face all ways shows his determination. And he is depicted in the dolls in an egg like shape because his determination was so great that if you were to push him over he would just roll back up. I attached a couple pictures of how my progress has gone.

I have built the figures around a clay form then cut the paper mache away. Then taped them back together, and adding several more layers of paper mache. With a desire to try and create a really smooth finish, I have been experimenting with Plaster of Paris, mixed with mostly wood glue, and a bit of water. The mixture seems to extremely resilient. Allowing me to sand pretty aggressively with my electric palm sander. Creating a very wonderful smooth surface. from your web site I also then apply a couple layers of wood glue, then begin to paint. From what I have seen over the last six months the Plaster of Paris seems to be really strong, with no brittleness, or qualities of Plaster of Paris you might expect when its only mixed with water. I have also seen one of my figures fall a couple feet with no sign of damage.

I think it worked very well. The only down side I can think of is that with the plaster of paris, it dries very quickly. 30 minutes and you can’t play with it much further. I found I had to watch it, using a wet hand or wet plastic to
smooth it out. So far all my projects with it have held up great. Although I might start to do without it, in trade of the paper clay as my ultimate desire for the recipe was for a smooth finish, which I have found achievable with the paper clay. One benefit of my recipe is that you can create a thin layer that holds up to sanding really well.

I did not use that recipe on the mask’s. But did use it on the projects you see in the attached pictures.
Thanks
Mark

See Mark’s Daruma dolls and other creations below: Thanks, Mark, for sharing your wonderful creations. The expressions on all the faces are wonderfu.

Thanks also for sharing your experience with your Plaster of Paris Gesso. As I mentioned to Mark, the first time I read about this mixture was in James Cochrane’s book Paper Sculpture: Over 25 Cute and Quirky Paper Mache Projects. When I read that book I worried that the mixture might be too brittle, or that it would harden too quickly. Now that Mark has been using the gesso for over a year with good results, I’ll definitely try it.