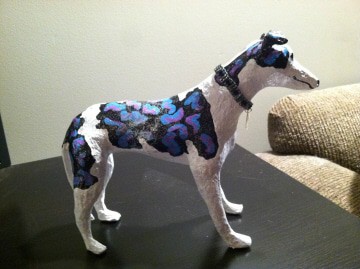 I just wanted to share with you what your video tutorials on YouTube helped me create. We are auctioning off nine paper mache greyhounds on facebook. Each greyhound is sculpted after one of our special needs or senior greyhounds. So we will raise money and spread awareness to help get these kids into new forever homes. (cont. below the photos–click on a photo to see it full-sized…)

I am always looking for new ways to raise money for the greyhounds at our center. I had been looking for a way to create a “litter of pups” to auction off for Valentine’s Day after seeing another group that did an auction of crocheted greyhounds last year. We had a table at a Christmas craft fair and a lady had a booth of paper mache animals. I hadn’t done paper mache since I was in grade school and we made pinatas but she kept telling me how easy it was so I decided to look into it.

The first site I found was UltimatePapeMache.com. Jonni had created a series of 6 videos on how to make a paper mache cat. I watched them and thought I might be able to do that with the greyhounds if I got enough volunteers to help. So we decided to make nine and call them the Valentine Nine. We had a small team working on them between cutting them out, sculpting, applying the paper mache and making custom beaded collars for each one. I then recruited artists from around the country to paint and embellish them. They are as far away as San Diego and Florida.

I knew you would want to see Terri’s paper mache greyhounds and learn about the auction, so I asked her if she’d like to do a guest post. She replied right away with the information and photos above, but my computer was turned off … I was busy tearing out plaster and ripping down fake wood paneling in my house – that’s my excuse. That meant that I missed the deadline, and Terri’s post didn’t go up in time for the auction, which happened on February 10. They called the event the Valentine Nine Paper Mache Greyhound Auction.

Of course, as soon as I got back on my computer and found Terri’s email, I asked her if I could still post her article so you could still see her paper mache greyhounds, and she graciously agreed.

The auction was a success, by the way – here’s some more from Terri:[/symple_box]

We were raising money for Cupid’s surgery bills. Cupid came to us needing immediate leg surgery for an injury he suffered during racing. His doctor said it looked like his bone had exploded inside of his leg.

We raised $1,830 towards Cupid’s surgery which will cover a little over half. We were very surprised and happy by the results.

Here’s a link where you can learn more about Fast Friends Greyhound Rescue in Swanzey, New Hampshire. We have over 30 greyhounds in our care at any given time waiting for new forever homes.

I’ve attached a picture of Caroline with the finished “micro” Moose. She and her mother Amy Broady decorated Moose.

I am also working on putting together another auction for April which is Adopt a Greyhound Month. There will be 10 greyhounds in the April auction. They are all currently available for adoption.

Thanks Jonni and have a greyt day!

[symple_box color=”yellow” text_align=”left” width=”100%” float=”none”]
April is coming up soon, so watch their Facebook page to see the announcement. And good luck Terri – both your real greyhounds and your paper mache greyhounds are wonderful. I hope they all find new homes soon.
[/symple_box]