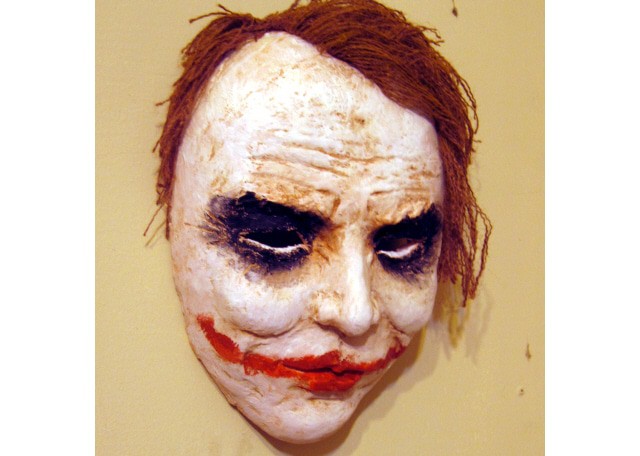 Edit – I made this mask before I developed the fast-setting paste and shop towel technique that I used in my mask book. The mask shown below was really fun to make, but the hard paper mache clay can be uncomfortable to wear against your face. Before getting started on this project you might want to watch my videos about the Pantalone mask, beginning with this post, to see the technique I would use now if I made this mask today.

I confess. I haven’t seen the movie. I specifically chose not to see it because of all the photos of Heath in his Joker makeup, and it just looked too creepy. I don’t watch creepy movies.

But this morning I saw an ad for a Joker mask, and something just came over me – I had to make one myself. I don’t understand myself sometimes…

I started the mask with a flattened ball of crumpled paper and masking tape, which I squinched and pressed until it was the general shape of Heath’s heart-shaped head. (I’m sure I’m violating all sorts of copyright laws here – oops.)

Then I added the brow bone, cheek bones, nose and mouth with aluminum foil covered with masking tape. Most of the modeling was done with the clay, so I didn’t stress too much about the form. If I took the Joker a bit more seriously, I probably would have spent more time on making the form, but it still came out OK. I’m not a portrait sculptor, not even close, so I was counting on the makeup to cover any mistakes in modeling.

I applied the paper mache clay, and smoothed it with the flat side of a damp knife blade. I left the eyes open so I can see out when I go trick or treating.

I threw the mask in the oven set at 200F and left it for several hours. When it felt firm enough to hold it’s shape, I removed the inner form. The clay next to the masking tape was still wet, so it went back in the oven for a while. If you try this project, be sure you don’t try to remove the backing too quickly, or your mask might warp while it continues to dry.

It’s a bit rough inside. Again, if I was taking this project seriously, I might line the inside with felt to make a nice soft surface. (I tried it on, and it actually fits.)

When it was completely dry, I covered the clay with a few coats of gesso, made with two parts joint compound, one part Elmer’s Glue-All and a dab of Burt Sienna to give it that “flesh tone,” as the Crayola people used to call their Caucasian pink. Do they still do that?

When the gesso was dry, I smoothed it out a bit with a damp sponge. I didn’t want to smooth it too much, because the texture would help make that creepy makeup effect.

I brushed on some white “grease paint” over the flesh color, and when it dried I added the black and red patches. I discovered that somebody left the cap off the black paint. Who could that have been? (Why are there never any scapegoats around when you need one?) But I managed to dig out enough.

Now some hair was added, using some old burlap I had from another project. The burlap was brown and I needed yellow, so I tried to get rid of the brown by running it through the washer with some bleach. It stayed brown. Note to self – burlap should not go in the dryer – next time I’ll remember.

For some reason, gluing the hair onto the flesh-colored bald spot was kind of creepy.

I used some yellow paint to lighten the hair a bit, but it needs more. And I used a glaze made from acrylic glazing liquid and a bit of Burnt Umber to bring out the creases and wrinkles on the Joker’s face.

And he’s done. Hair could use some work.

After spending the day with this guy, I’m starting to think I might watch the movie after all. Maybe.

After I was too far along with this mask I found some photos of the Joker with much more interesting expressions. I hope someone else will try this, and maybe use different resource photos. If you do, be sure and let us see how it turns out.

21 thoughts on “Make a Joker Mask with Paper Mache Clay”