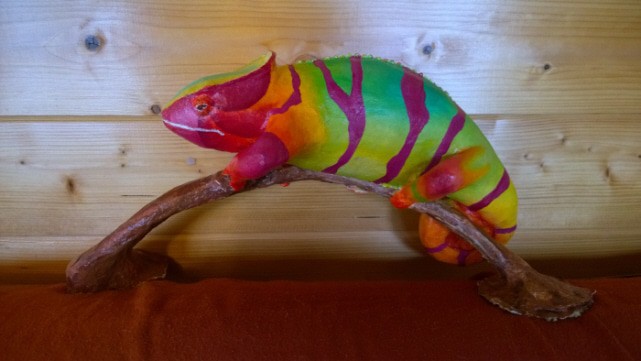 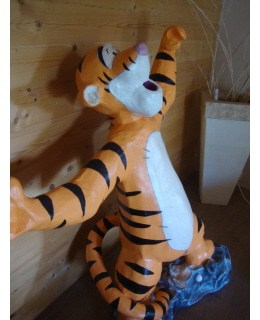 Today we have a guest post from Marilyne, who has some very nice sculptures-in-progress to show us in addition to her Chameleon — and she also has a request for suggestions at the end of her post.

Before we get to her post, I just wanted to give you a link to a YouTube channel I found this morning that shows a fellow making realistic dinosaur sculptures. Most of them are made with epoxy clay, but he says he’s now moving to paper mache because it’s so much less expensive. It looks like he’s actually a dinosaur expert, so if you have any interest in making a sculpture of one of the long-departed beasts, you might want to watch a few of his videos.

Hello everybody, my name is Marilyne, I’m French and I’ve always been inspired by nature, animals and creations of all kinds. At the beginning, words were my “weapons,” I used to write stories, lyrics, poems. I still do but recently, a big change in my life made me realize it was time to believe in myself. So, new home, new life, and challenges!

The first one was to build a big and famous tiger for my best friend’s son, that was when I discovered paper mache.

Then, I tried to find what I really wanted to make. Researches on the web led me to this great website, I tried different techniques and recipes, took some holidays and here are the results.

My first finished sculpture is a chameleon.

I followed Jonni’s instructions, made a profile with cardboard, from a picture, used newspaper and masking tape to do the volumes. The piece of wood is made with a piece of wire, covered with newspaper. The paste I used is just made with mixed paper, water and flour. It takes 3 or 4 days to dry and I usually put a second layer, just to be sure it will be hard enough. Then, I sand it and paint it with acrylic paint. I’ll maybe put some varnish on top of it…

Now that my chameleon is nearly done, the next sculptures are a flying parrot, a squirrel, an iguana and a pink flamingo.

I have some issues to make the flamingo’s legs. I’ve made them apart from the body because it’s really heavy and I want to empty it before attaching the legs. If anyone knows how I can pull this off, it would be really great. I made the legs apart from the body, and I made their armature with a very thick piece of cardboard (maybe 2cm), it’s very strong but when I put the paper paste on top of it, the legs become too big and look awful. Perhaps I should use a big piece of wire, make the legs with it and attach it inside the body before gathering the different parts… Suggestions, anyone?

Have a nice day everybody, and thank you for sharing your experiences, it really helps!!