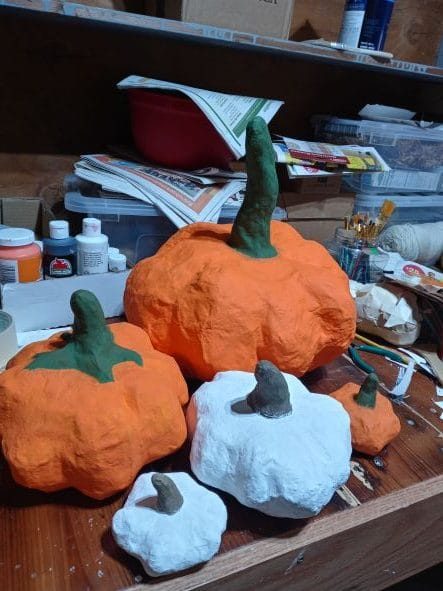 Fall is fastly approaching and for the past month, I’ve been working on these pumpkins to decorate the house!

I started out with the medium pumpkins using a trash bag, newspaper, and tape to make the pumpkin shape (there are lots of Youtube videos showing how to do this).

But after that, I thought some little pumpkins would be nice so I cut out some cardboard circles and added the bumps using newspaper.
But I needed more pumpkins! So this time I made one huge pumpkin that is the largest project I’ve made (I tend to make pretty small sculptures).

For the painting, I used Jonni’s homemade gesso, which is amazing by the way! And then put on the base colors of white and orange. For the orange pumpkins, I then dry-brushed a light orange followed by a darker orange to bring out some of the details (although it’s very subtle and hard to see in the pictures). For the white pumpkins, I just dry-brushed a slightly darker white. And all the stems were green dry-brushed with a darker green.

P.S. I don’t all the way know what I’m doing painting-wise. I watched a couple of YouTube videos about dry-brushing and gave it a shot 🙂 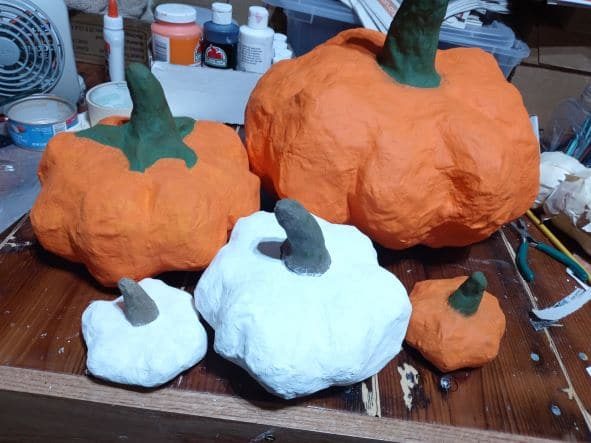