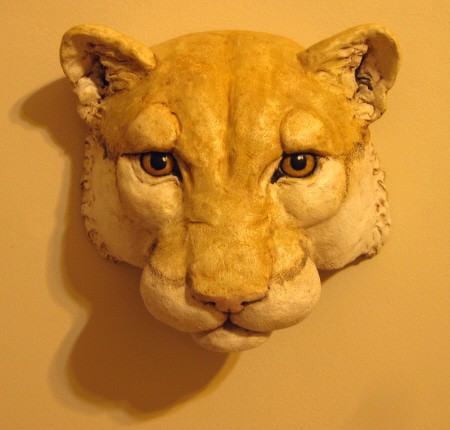 Note: If you like the big cats you might also be interested in my lion wall mask pattern. There’s no silicone mold or plaster required for the lion, and the pattern is easy to cut out and tape together. You can find the videos and post for the lion here.

After you read my last post, you probably assumed that my experiments with paper and plaster were done – ha! The next time I say something silly, like “I can’t see why ___ won’t work,” you have my permission to giggle.

I mentioned in that post that I intended to use the plaster/recycled paper recipe for a thin shell on the face of the decorative masks, and then I would make the pieces stronger by backing the shells with paper strips and paste. I really did think it would work, but it doesn’t. As you probably guessed already (but were too polite to mention) when the paper mache dries it also shrinks, which causes it to pull away from the shell. “Delaminating” is the official term for it, I believe.

I’m not the first person to encounter this problem – this site discusses the problem and a solution – but I decided to go a different way. I mixed up a second batch of plaster and paper pulp, this time using twice the amount of paper. I added this to the shell immediately, so that both layers would set up together.This is how the back of the piece looks when the piece is finished:

You can see photos of the “instant” paper mache being mixed and how the first layer was applied in this previous post.

After the cheesecloth is laid over the first layer I used a scrap of burlap to press the cheesecloth into the paper mache, which also gave it a fairly smooth surface. I then rinsed out my bowl, mixed up another batch with more paper, and added it to the back of the piece. This was also smoothed over with the burlap scrap.

The finished piece feels remarkably strong, and it has an interesting “ping” when it’s tapped – similar to ceramics. The cougar head, which is about 10″ wide, weighs 22 ounces.

The idea of using two layers of wet plaster with cheesecloth in between was inspired by a project I found in The Barefoot Architect, a book about inexpensive third-world building methods. (They used cement and onion bags in place of the plaster and cheesecloth). The idea of playing around with plaster and paper pulp came from Jonty, as I mentioned in the previous post.

The recipe makes a product similar to commercial Claycrete and Celluclay, but I use less paper so the plaster is able to completely fill the mold. This gives a very finely detailed surface, without the bumps and roughness that’s typical of the commercial products that I’ve tried.

I don’t recommend this formula for one-of-a-kind pieces, because it sets up too quickly. 5 to 8 minutes is all the working time you get, which is fine for a mold, but way too fast for direct modeling. For working over an armature, the original paper mache clay recipe is still best.

The plaster is mixed with the water and oil, and then the paper pulp is squished in by hand. This is brushed into the mold so that no air spaces get trapped.

Same as the first, but with 1/2 cup paper and no oil. There’s nothing magic about the amounts, so there’s plenty of room for experimentation. This particular formula works for the series of decorative masks I’m making, but you should do some tests before applying the formula to a project of your own.

I showed the process of making the silicone rubber molds in a previous post. Since then, I made a new cougar. I like the new one much better. The wolf and hippo also need some work, which means new molds for them, too – and that means that this series is getting a bit expensive. The final pieces cost just a few pennies each, but the molds cost around $15, and twice that when you do them over. Ah well – all part of the learning curve.

Edit: You can see how the cougar came out at the top of the page. If you’d like to see the hippo wall sculpture, click here.