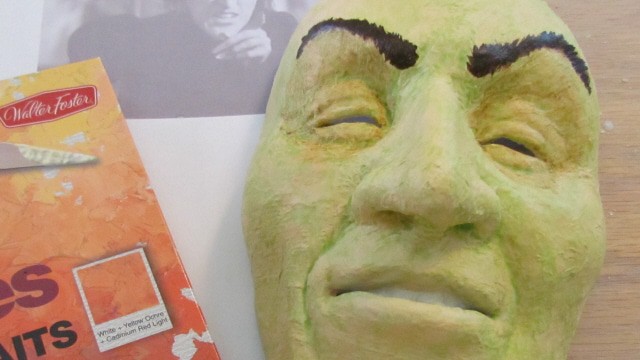 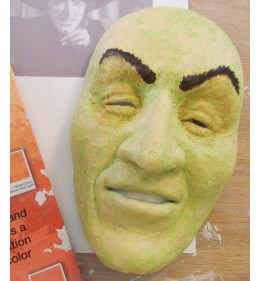 I’ve been humming the tunes from The Wizard of Oz all day, because I just made a mask based on photos of the Wicked Witch of the West. Although Margaret Hamilton’s makeup artist didn’t give her creepy skin, I decided to give her some weird, leathery skin anyway. It looks particularly fetching in green. I show you how I got that texture in the video.

If you missed the video that shows how the Plastilina Modeling Clay was formed over a skull to make the form for the paper mache, you can find it here. And several people have asked where I got the skull. I bought mine several years ago on Amazon.com. As I mention in the video, the skull isn’t the same size as my face, so the mask doesn’t fit – but sculpting over the skull is a lot of fun, and I highly recommend trying it if you want to practice sculpting faces and you don’t want the molded features on a mask form to get in the way of your creativity.

One thing I forgot to mention in the video is that I used some of the sculpting techniques that I learned from Adam Reeder’s video to help me get close to a likeness of Margaret Hamilton’s features. I wasn’t trying for perfection (this is just for fun, after all), but I think I came pretty close. I really should mention Adam’s video more often – I’ve watched a lot of videos about sculpting faces, and his ideas just seem to work best for me.

I haven’t decided what mask to make next. Do you have some ideas for me?

23 thoughts on “Witch Mask, with Creepy Skin Technique for Halloween”