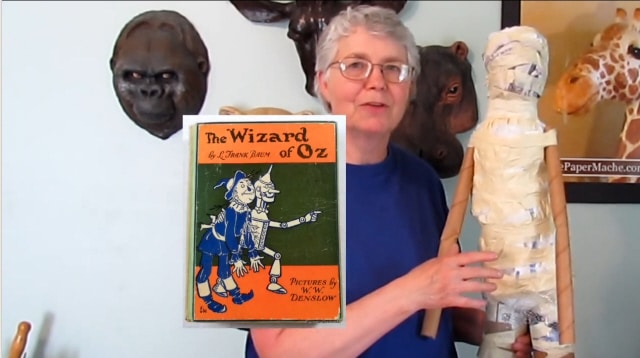 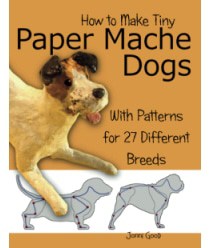 I finally get to start the experiment in waterproofing paper mache clay that I’ve wanted to do for ages. I think I’ve finally found a way to do it that fits with the way I like to sculpt (and with my basic laziness, but that’s a whole ‘nother issue..).

I feel like I can afford to take some time for this project now because my latest book is finished, and (drum roll please) it’s available now on Amazon.com.

I want to thank everyone who offered suggestions for the title. Even though I wasn’t able to use all of your ideas, I wrote out the entire list of suggestions and read them over and over again. The original title was Patterns for 25 Tiny Paper Mache Dogs: Make Them All with Just Wire, Foil, Paper and Paste. With your help, the title changed to How to Make Tiny Paper Mache Dogs: With Patterns for 27 Different Breeds. I think it’s an improvement – shorter, more descriptive, easier to read when shown on a tiny image. There’s still that word “tiny” in there, but I think it works. I hope so, anyway.

So, back to the waterproofing experiment. As I mentioned in the video, I’ve been looking into a lot of different products made for waterproofing concrete, as Rich suggested a very long time ago. I thought that if I could find a product that would go on easily and sink into the paper mache clay instead of just sitting on top, I wouldn’t need to add an outer coat of Quickwall, like Julie did on her mountain lion. I wanted to avoid doing that just because I don’t like direct-sculpting with concrete. That’s just me.

Jackie’s idea of adding the painted-on layer of thin-set mortar to her goddess sculpture came closer to what I was hoping for, and I really like the colors she achieved with the addition of a small amount of paint over the mortar. It makes her Goddess fit in with the natural setting in a way that I like. But I’m getting lazy in my old age, and brushing on the mortar is one more step.

So, when I saw that the Trojan Masonry and Concrete Sealer can be sprayed on with a cheap backpack sprayer, like the one I have sitting out in the garage, I thought “that looks easy.”

But will it work? I sure hope so – because I have visions of the scarecrow, the tin man, maybe the rabbit and the caterpillar from Alice and Wonderland, and who knows who else taking up residence in my back yard. And maybe even my front yard, if I get brave. Wish me luck.

I’ll put up another video in a few days so you can see how the armature looks when it’s done. It will look better than it does now, I promise!

Edit: The next post is now finished, and you can see it here.

Update: The project was finished, but after the first rain, the brim on the scarecrow’s hat was flexible, so it absorbed water. It wasn’t sticky, like it was before the clay dried, but it wasn’t solid, either. At this point, I recommend that you read up on the two experiments shown on this site that did actually work: Julie’s mountain lion, made with Quickwall cement over paper mache clay, and Jackie’s Goddess, made with thin set tile mortar over paper mache clay.