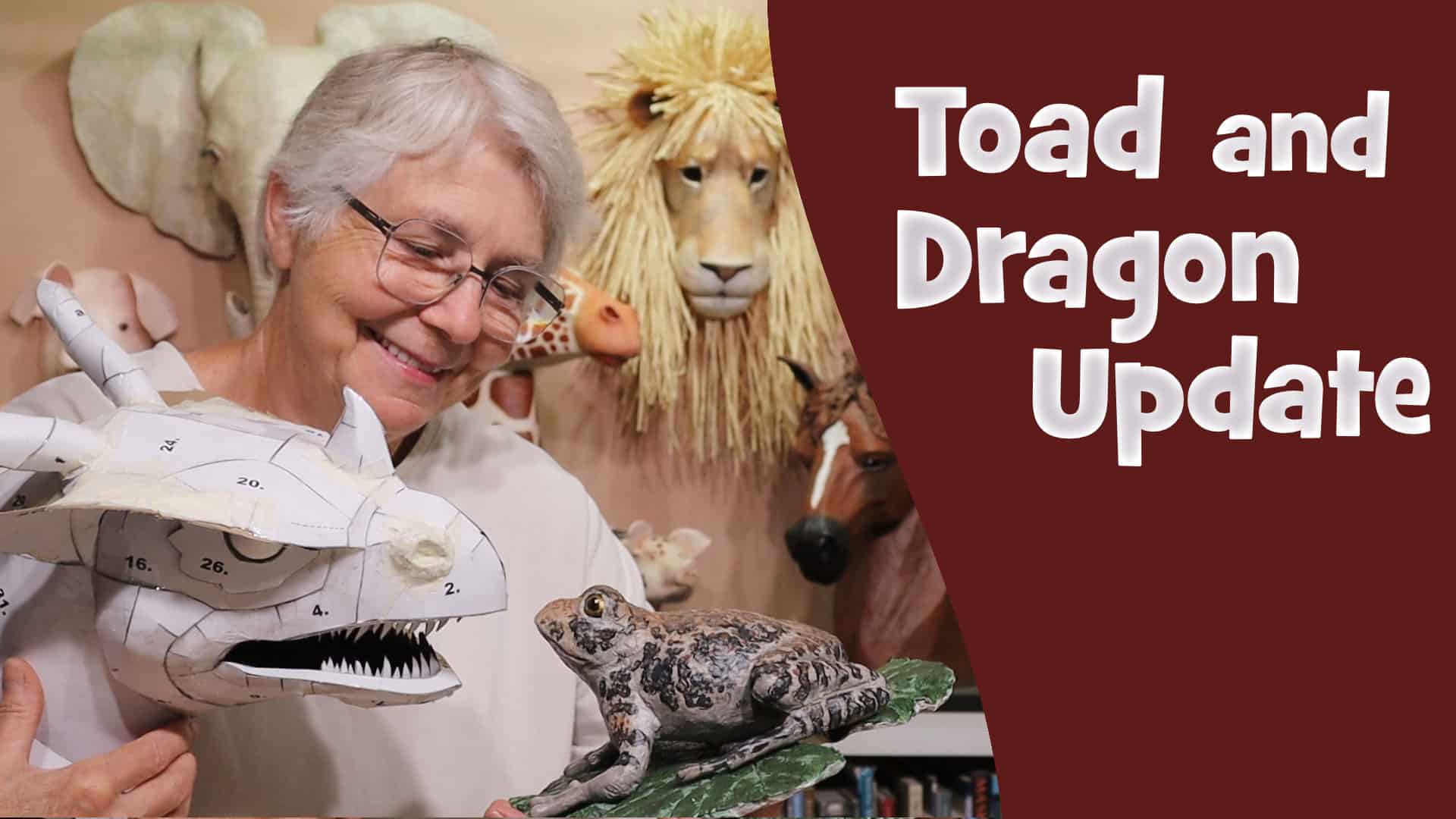 The toad got wet, but is still doing fine. And I’m working on the dragon pattern …

The one thing I forgot to mention in the video is that I’m not putting the toad and his leaf casting directly on the ground. That would be like making a bowl-shaped item out of the paper cement clay and filling it with water. I think it would be an unfair experiment to have him stay wet for weeks at a time. He’s sitting on the landscape cloth that I’m using to kill some invasive grass around the strawberries, instead.

The sealer I used for the toad is holding up well, too, even in strong sunlight, which can damage almost anything. It’s Rustoleum Matte Clear Enamel, and I gave the toad two coats. You can find the first video about making the toad here.

If you’d like to experiment with the new paper cement clay recipe, you can find it here.

And about the dragon …

To learn about the “primordial fear” theory about dragons, watch The Invention of Dragons video (The beginning is silly, but check his show notes for the academic articles he used.)

If you’d like to see how my dragon turned out, you can see it here.

And I just finished a new dragon mask pattern, too.

–Did dinosaur bones inspire the ancient myths about dragons?

The only videos I can find linking dragons with dinos appear to have a strong religious angle, and they suggest that dinosaurs and people lived at the same time. If that idea interests you, they’re easy to find on YouTube.

However, my theory is that people found bones of dead and fossilized dinos, which is a totally different thing. I couldn’t find

But I did find one other theory – that there was once a creature (not a dinosaur) that lived after people arrived. I don’t know … it’s interesting, but I’ll wait for more proof before I believe it. However, if there was a large flying lizard it explains why dragons have bat wings, when the theory that dragons illustrate our primordial fears doesn’t mention monkeys being afraid of bats. 🙂

And this video tells us about a real dinosaur that could have inspired two-legged dragons (wyverns). It’s a bird-like creature with bat wings.

The “core gardening” method taught on the MLGardener channel – a ‘lite’ version of hügelkultur that helps save water.

13 thoughts on “Toad and Dragon (and garden) Update”