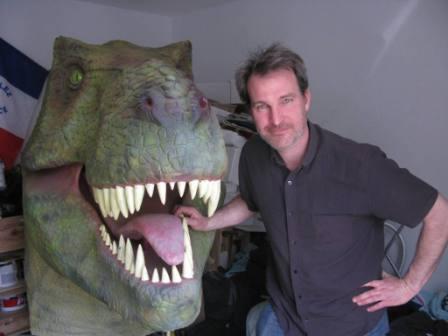 What a treat we have today! Nicholas Allen is our guest artist, and he’s going to tell us what it was like to create the head of a life-sized T-Rex, named Georges, in a small Paris apartment. What a story, and what a beautiful sculpture. I can just imagine how exciting it would be to meet Georges in person in his new museum home. (You may remember Nick’s previous article about Marusya, a lady T-Rex who now lives in a museum in Moscow.)

Be sure to scroll down to the photo gallery below to see Georges in several stages of development.

I naively thought it would take a couple of months to build a 1:1 reconstruction of the head. I was pretty thorough about measuring the T-Rex skull replica in the palaeontological museum in Paris, not touching it, but coming close enough with my tape measure to ensure the security guard kept a careful eye on me. I went twice in fact, to double-check some measurements. So I should have guessed this would be a major project, and not two months of work.

It took 14 months to complete. I couldn’t say how many hundreds of hours of work this was. Sometimes I would labour obsessively for days, through the night until I saw the first glimmers of sunshine across the Paris rooftops. Other times the model would stand idle for days or weeks while I was away or busy earning a living.

The technique is simple enough. Cardboard armature, taped up, bits of hardboard here and there, some parts fastened together with plastic cable ties (wonderful things) while Jonni’s papier mache clay formula dried. I didn’t use all the ingredients, just joint filler, wood glue, toilet roll and linseed oil. I also used a lot of PVA in mixes, as it was cheaper. The application was occasionally a couple of centimetres thick and would take three weeks to dry deep enough, but usually layers of a few millimetres would dry enough over a few days to sand.

Looking back on the process, I know I used way too many materials. These are cheaper in Britain than France, so it became a back-breaking ritual to lug back massive bags of glue and filler and tools on the overnight coach from London.

The secret to any large scale model, I concluded, is don’t be in a hurry to do the ‘sexy stuff’, ie applying the clay, but rather get the cardboard form as exact as possible before you do that. The neck housing and actual skull had to be robust, and the clay and cardboard together are up to half an inch deep on the neck, if you consider the layer of scales I added to the basic clay finish. But constant adjustment and change to the actual snout or cheekbones etc meant the clay just kept piling up, and more materials would be needed. I lost count of how many litres of glue and PVA I used, but I would guess around 30-40 litres.

If I built another head the same size, I could achieve the same finish using perhaps just over half the amount. So measure, measure and measure again, plan out your design exhaustively, and only then get stuck into the clay application. I actually found myself sitting next to a master potter at a dinner in London last year, and she sniffed in disdain at my use of the word clay, but ‘synthetic clay’ will do for me.

The model needed a sturdy frame, and one that would dismantle for transportation from UK to France. I befriended a metal worker in my hometown and used his gear to weld a frame out of box steel and square bar. I designed it myself to include two triangular sections that would slide into the model’s upper snout section and lower jaw. The head itself disassembles into two head parts, upper and lower (Photo4), and the neck, which I sadly had to saw into two parts to get out of my door.

I should add that I built this model in a tiny sixth-floor bedsit in Paris. Never again. Living with your work is unhealthy, both mentally and physically (dust), and having to build everything to dismantle and carry down stairs means 30% more work.

The teeth were carved from wood, all 58 of them, exactly the same size as the original. As careful as I tried to be, I still managed to slit my finger open a couple of times with the modelling knife, giving ‘Georges’ a taste of blood as his ancestors so enjoyed. The eyes I had specially made by a taxidermist suppliers in Snowdonia in North Wales. They were expensive but I knew I would regret it later if bought inferior ones or made them myself, after all the work I put in. It was money well spent, these magnificent glittering green glass eyes really bring him to life. Finally, the colouring is a mix of aerosol spray paints, which enabled a nice muted, mottled effect.

In early April I hired a small van, dismantled and loaded Georges, and drove 12 hours in pouring rain, with one three-hour breakdown, to his new home, Le Musee des Dinosaures in Esperaza in southern France. I spent a few weeks writing to various places to see if they wanted to take the model as a donation. The museum in Esperaza jumped on the offer, and I couldn’t have asked for a better home. I hope to make a living building models in the future, but for now I’m happy learning my craft. Forty thousand visitors seeing him each year is reward enough. And I got a gratifying sense of the interest the model holds for people just seeing my friends’ reaction to it (photo 15).

The last thing I would say to anyone considering doing a large model is be a rottweiler about the whole project, get your teeth into it and don’t let go. There were times when I despaired, felt exhausted and exasperated at having no suitable space or tools to work with, or realizing that I had done some bits wrong and that I had to redo them, even though it meant drilling, sawing and grinding off days of work (see photos 5,6,7,12). But if you know something isn’t right, do fix it, because it’ll bug you later if you don’t. So good luck with your own projects folks, and never give up.