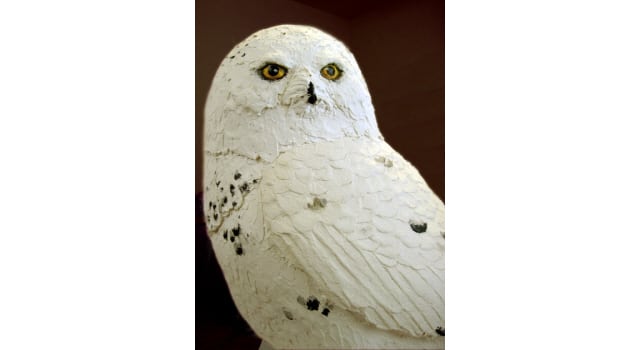 The snowy owl is coming along, but slowly. I got sidetracked with a project that I started back in June, and just rediscovered. Does that ever happen to you?

In the last post I showed you how I added a thin layer of paper mache clay to the snowy owl armature. The first layer gives you a nice surface to work on while adding details, like feathers.

I started the feathers by adding another thin layer of paper mache clay and then I used a large spoon to form the shapes of the smaller feathers on the shoulders. I used a knife to form the edges of the longer wing feathers.

I changed the paper mache clay recipe a little bit, more or less by accident, and got a slightly smoother clay for the details. I just added a little more glue and a little more flour, and mixed really well. You can play around with the proportions in the recipe to get the feel you want.

When the basic shapes were outlined, I turned the spoon upside down and used the handle to give the feathers a bit more definition. My owl will only be seen from a distance, since it will eventually be mounted on a post in the back yard (if my latest weatherproofing scheme works, and if I can figure out a way to keep it from scaring the chickens…).

Since it won’t be seen up close, I’m not taking much time to get the feather patterns “right.” This wouldn’t do for a science project or for a sculpture that will be judged by anyone, but for my back yard a stylized approach is fine. (If you need more detail and precision, just do a Google image search for the individual owl parts, and use the hundreds of photos as models.)

To soften the shoulder feathers a bit, I waited a few hours until the clay set up a little, and then put a piece of plastic wrap over the feathers and carefully smoothed them through the plastic. This made them lie flatter. If you have a cold owl, you might prefer to rough them up a bit.

In this photo you can see the wing feathers beginning to appear.

This is how they look now, with the left wing and tail pretty much done. For finer detail, like the individual strands in each feather, you can use a stiff brush when you add a thick gesso, after the clay is dry.

I modeled two eyes and a beak, and let them dry before working more on the face. When I added these two balls, I thought they were too big. Now, I know they’re actually too small. The beak was too small, too, but it was easy to enlarge when the face feathers went on.

This is how far I’ve gotten on the face. More work needs to be done, but I’ll let her sit on top of the fridge and glare at me while the feathers dry. The face feathers are soft so they don’t have much definition. I just added a thin layer of clay with a knife, and scootched it around a bit.

If the snowy owl comes out OK when she’s finished, I’ll put all these separate posts together in a downloadable PDF so they’ll be easier to follow.

By the way, since the stores are filling up with Christmas stuff, I think it might be fun to start suggesting some projects for home-made presents. I don’t personally “do” Christmas any more, because the commercialization takes all the fun out of the holliday. (I still haven’t figured out how to get the relatives to take me off their lists, though…) If you have ideas for nice presents that we could make with paper mache, or if you have an idea but aren’t quite sure how to do it, let us know. Maybe we can start a new tradition.

The rest of the posts in this series: