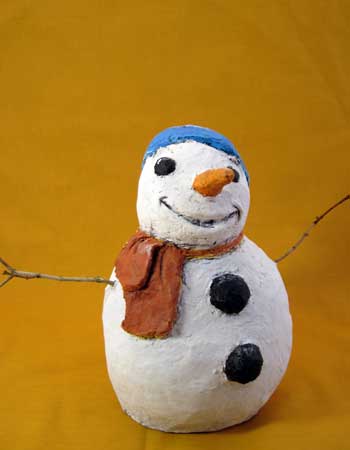 I made this goofy little snowman by stuffing a plastic grocery bag with old newspapers and covering it with paper mache clay.

The idea for using a stuffed plastic bag for a form came from Laurie Baker’s guest post showing her wonderful Halloween pumkins. My snowman isn’t nearly as big, since Laurie used garbage bags and I used grocery bags, but there’s no reason you couldn’t make a really big snowman if you wanted to.

I admit my first little snowman does not qualify as great art, but for just a few hours of my time, I think he came out OK.

Now let’s get started with our snowman:

First, stuff your bag with old newspapers, and then use string to create a neck. Use masking tape to cover the open top of the bag, and to cover any folds.  Push and poke your bag until you get a shape and attitude you like. If needed, add some more masking tape to keep the shape.

Now cut round or oval piece from scrap cardboard and tape it to the bottom of your snowman so he has a nice flat surface to sit on. I used plastic (Scotch) tape because I didn’t want to cover the bottom with paper mache clay (large flat surfaces tend to warp when they dry). Masking tape is designed to be easy to remove, so it will unstick itself over time. The plastic tape should stay on longer.

I then reinforced the connection between the cardboard bottom and the plastic bag, and made a nice smooth transition, with more masking tape.

Now add small balls of “coal” for his buttons and eyes, make a twist of newspaper for his carrot nose, and build a warm knitted hat out of a long twist of newspaper around his head and a ball for the top. Then poke a hole in the plastic bag and insert twigs for the snowman’s arms.

Note: Use strong twigs, or leave the arms until after your snowman is painted. I broke my first pair and had to replace them. If you add the arms later, drill a small hole through the clay, plastic and some of the newspaper inside, put a dab of glue on the end of the twig, and then poke it in.

Sit your snowman on a piece of cardboard or a baking sheet, which you first cover with plastic wrap. This will make it much easier to move your snowman while you work. It also makes it easier to move it from your work table to a warm place to dry after the clay has all been applied. (I forgot to do this, myself, and it made things difficult).

If you don’t want to run to the hardware store for your clay ingredients, you could make your snowman with the traditional paper strips and paste. It will take slightly longer, but it should still turn out just fine.

I decided at the last minute that my snowman needed a scarf, so I added more clay in that area and used my knife to sculpt the scarf. I also added a thicker layer for the mouth area so I could add some lips. Because these areas are thicker than the rest, they will take longer to dry.

Now put your snowman in a warm place to dry, perhaps near a radiator or heat register. Allow him to dry completely. There should be no “give” at all when you push on any part of him. Be especially careful to check any area that has a thicker layer of clay, like the scarf.

Now just paint him any way you like, and put him out for a cheerful display. If you give him away as a gift or make some to sell at a craft bazaar, you would want to cover the cardboard bottom with white felt.

Next time I make one I think I’ll give it a wide-brimmed hat, like the kind I associate with Diane Keaton in her early Woody Allen movies. Maybe add a sweater…