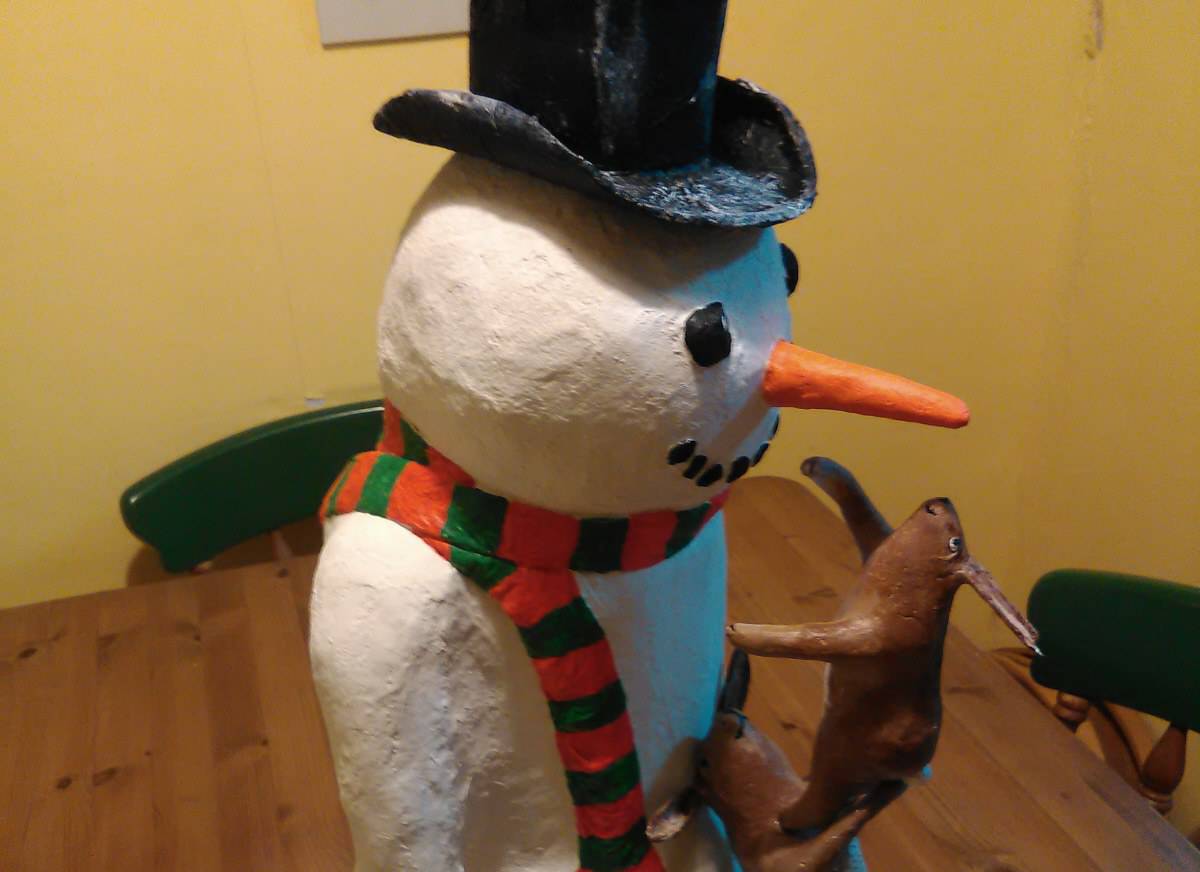 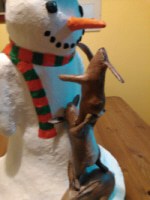 This delightful paper mache snowman by Alan Wakefield includes three scheming rabbits – they’re after the snowman’s nose! I begged Alan to show us how it was made, and I’m so glad he agreed! I’ll let him take it from here:

Hi Jonni, these are the details of the snowman build, I hope it’s the right sort of thing for your site. [Yes, Alan, it’s perfect for this site! JG]

I am a retired English engineer living in Portugal. I have carved wood and sculpted ceramics for many years, but working with paper mache is a new venture. We don’t get snow very often in The Algarve so I decided to make my own snowman from paper mache. I took inspiration from an illustration that my son Luke did many years ago. You can just about see it on the work bench. What follows is a brief account of how I built Snowy.

I started by rolling a cardboard tube about 20 cm diameter by 30 cm tall this was stuck to a 60 cm square card base with masking tape. Next I made several 5 cm deep cuts around the top to give me tabs approximately  2.5 cm wide. the tabs were folded over to enclose the tube and make the shoulders and neck area of Snowy. Rolls of newspaper were used to bulk out the base and to form the arms, these were held in place with masking tape. Once I had the basic shape it was covered with strips of kitchen paper, these were stuck down with a mixture of plaster crack filler and white PVA glue thinned with water to a paint like consistency. The head is a ball of newspaper covered in tape glued down and reinforced with a chopstick spike.

When dry Snowy was given a top coat of paper clay. This is an equal mix of toilet paper soaked in hot water and blitzed to a fine pulp, PVA glue, corn flour and ready mixed crack filler. I use ready mix filler on this because I find that if kept in an airtight container the clay will last much longer, the down side of that is, it takes longer to set on the job. I use powder plaster for the glue as this goes hard quicker. The toilet paper was strained and most of the water was squeezed out, then all parts are brought together in a bowl by hand. A good investment is a box of latex gloves as the clay won’t stick to them and they help with the smoothing later. Work the clay for ten to fifteen minuets to get a smooth consistency, then store airtight until needed.

The rabbits are made in a similar way to Snowy.

I started with a card rabbit profile then bulked with paper for the body, the limbs were rough shaped card stiffened with folded card and tape. Everything was covered in kitchen paper strips and glue, then sculpted with paper clay. I had some trouble with the ears of the baby rabbit as I made them too narrow at the base and found that the glue made them sag I had to reinforce with strips of plastic yogurt pot. I will rework the ears after Christmas when I have more time. When finishing with the paper clay I found that tapping it in place with a latex gloved finger helped it adhere to the body and give a smooth even covering.

Making the top hat was fun. Just bits of cereal packet taped up and covered with glue and kitchen paper strips. A thin roll of kitchen paper around the brim helped to stiffen it. Some black paint, white highlights and a bit of a crumple helped to give it that Dickensian look. The scarf was four sheets of kitchen paper still attached to each other and folded to make a long strip. This was tied around the neck and covered with glue. I liked the way the paper took on the appearance of fabric once it was dry.

Painting the Snowman and Rabbits.

Finally it was all painted with acrylic. The rabbits just balance on each other rather than being glued, I think it gives them a more lifelike feel. The small snowman was made for a friend using the same technique but the arms are made with twisted wire covered in tape.

All the best for Christmas and the New Year.

31 thoughts on “Snowman, Hold on to Your Nose!”