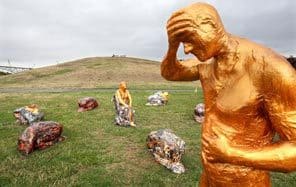 The newspaper sent me an email just a few minutes ago to see if I knew who the artist was – which I think is rather flattering. Unfortunately, I don’t know who created this piece, which:

…consists of several pieces: a full-size gold-plated man standing on the waterfront surrounded by what appear to be shells, some with the heads of people emerging from them.”Anew is gifted to the citizens of Seattle in the spirit of awakening,” the artist wrote in a plaque attached to the sculpture. “Each of us has shells to break through, parameters to look past and wills to exercise. Arise and stand and then start moving.”

As a P.S., the artist wrote, “If still here I will remove once the rains return.”

Unfortunately, you can’t give art to the people of Seattle without a permit, which our anonymous artist failed to do. Therefore, the work will be removed from the park on Thursday. So if you’re in the area and you want to see the work before it disappears, you’d better head down to Gas Works Park now.

I can’t imagine spending so much time to create a sculpture, or group of sculptures, and then just give them away without trying to get any credit for it. My ego is way too big for me to ever be that selfless. But it is a way to (very temporarily) get your work in front of the public without having to get permission from the dreaded “committee.”

I’m trying to figure out how the artist made the central gold figure. It looks like it may have been molded around a real person. Hmmm.

Now, I have a legal/philosophical question to put to you. If you followed that link to the slide show, you saw that the newspaper will sell you a print of their photo of the sculptures. I became aware of certain copyright issues having to do with photos of artwork when I lived in Portland. While I was there, the creator of Portlandia got himself in the news by insisting that no photographs or other images of his sculpture could be sold, even though the sculpture itself belonged to the city, because he owned the copyright of the original work. Which seems fair, although it did make a few people unhappy who wanted to put the image on T-shirts or whatever.

Now for my question. I realize that a group of sculptures that shows up mysteriously in a popular public park is news, and of course the work should be shown in the paper. But should the paper be allowed to sell those photos, since they cannot have obtained the copyright from the sculptor? In other words, should the newspaper be able to profit directly from an image of a piece of artworkÂ  they had no hand in creating?Â  Or did the artist give up all right to his work the minute he placed it in the park? Thoughts?