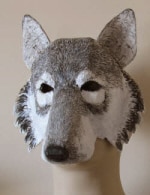 Note: The video on this page is part of a long series because it took a long time to make the sculpture and turn it into a mask. If you’d like a much faster start, check out my wolf mask pattern. Just print it, cut out the pieces and tape them together. Then you can use the techniques shown in the video series to embellish the mask and add detail, without needing to start from scratch.

I tried out the human skull-shaped mask form I made, but adding the features of a wolf’s head. It will eventually become a display mask for my wall.

I thought there could be problems with the human bones inside the wolf’s head, but it is actually helping. For one thing, it’s making sure that the face doesn’t flatten out, which is a real issue for me when I use photos for reference models.

I also made several sketches, and I’m using them instead of photos while I build the basic underlying forms and proportions, so I don’t get confused by color changes and details like fur.

I’ve noticed that most of the sculpting videos I see on YouTube don’t really have a lot of explanations about why the artist is doing what they’re doing – often it’s a speeded-up view of the sculptor moving clay around. I can’t actually go that fast myself, since I really do have to think things through, but maybe you would prefer fewer explanations. So – what do you think? Would you like me to whip through it a little faster, and explain things a little bit less?

And another question for you – I stopped doing videos last year after I dropped my camera on the floor (cameras don’t seem to like that) and I started again recently because my very nice step-mother and father gave me a new one. (Thanks, Pete and Dianne!). I’m having a lot of fun doing them, but which type of post do you actually prefer – non-moving tutorials, with still photos and text like a normal blog post, or these video posts? Let me know what you think.

Next question – how many of you have signed up on Pinterest? Do you like it? Have you actually figured it out?

Since I’m asking all these questions – are these videos taking too long to load on your computer?

OK, I’m off to finish that wolf. Next time I’ll try to fix the lighting a little better, and maybe not cut off the top of my head. Getting the cat to be quiet seems like an impossible task, so I won’t even try. 😉

Update: If you’d like to see all the other videos in this series, you can find them here:

And for those of you who don’t have time to watch the whole series, I made a much shorter version showing the highlights. You can find the short version of How to Make a Paper Mache Mask here.