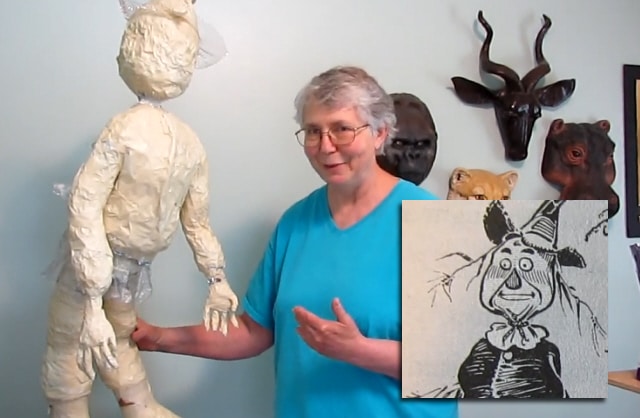 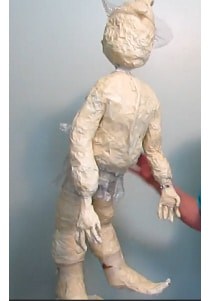 Update: After the first rain, the brim on the scarecrow’s hat was flexible, so it absorbed water. It wasn’t sticky, like it was before the clay dried, but it wasn’t solid, either. At this point, I recommend that you read up on the two experiments shown on this site that did actually work: Julie’s mountain lion, made with Quickwall cement over paper mache clay, and Jackie’s Goddess, made with thin set tile mortar over paper mache clay.

The armature for  the scarecrow sculpture is ready for its paper mache clay. I hope to apply the pm clay in the next few days, probably in two coats. I’ll start with a base coat, and then add a few details like buttons and facial features over that.

All of the clay has to be completely dry before I can add the waterproofing sealer, so I’ll probably let it dry for at least a week before adding the sealer to the sculpture.

I should mention that this is an experiment, just in case you didn’t happen to see the previous post. I’m reasonably positive that the sealer will work, but we won’t know for sure for another week or so.

As you can see in the video, I used crumpled foil, armature wire, steel wire, and aluminum mesh to add the forms to the armature. I’ll do most of the actual sculpting with the paper mache clay. That’s why you still can’t see any features on the face.

I like the new illustration I found much better than the one I started with, because the first one had a face that was just painted onto a stuffed flour sack. The second illustration looks like the features are actually sculpted on the face, which will work much better.

I’m kind of embarrassed to say that I’ve never read any of the books in the Wizard of Oz series, although I’ve watched the movie many times. I’ll head down to the library later this week to pick up a copy. One more thing on my list…

And, speaking of books, if you’d like to peek inside my new book about the paper mache dogs, click here. 🙂

17 thoughts on “Scarecrow from the Wizard of OZ, Part2”