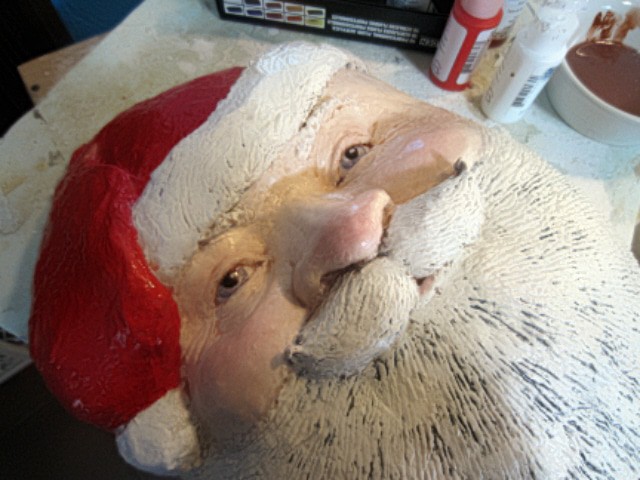 Continued from this page … 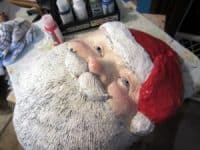 If you read the previous post, you know how this Santa portrait mask was made. Now he’s all ready to paint. The deep texture that I put on the beard made the painting step go really fast.Use a damp sanding sponge from the hardware store to smooth your Santa. The damp sponge keeps the dust from floating around in the air. To make him even smoother, you can give your Santa several coats of home-made gesso, damp-sanding between each coat. You can find the recipe in the Art Library under the Paper Mache Recipes tab.

I used a grey undercoat on the beard and the fur of his hat, and red on both the hat and the face. It looks rather startling in the photo, but it will be covered with the next colors.

Then I used a warm white on the beard. With an almost-dry brush, I tried to catch only the tops of the ridges so the darker grey would show in the crevices.To make a warm white, add a small dab of yellow ochre to your white paint.

The face was painted with Northern European flesh color (white, cadmium red, yellow ochre, and a touch of burnt sienna.) It took several coats, with variations in the amounts of the colors in the mix, until I thought he looked OK.

Hint: if you make a lot of sculptures featuring people faces, you’ll want the book Color Mixing Recipes for Portaits. I use my copy a lot, and it saves a lot of time.

Next,I gave Santa some rosy cheeks and a pink nose (he spends a lot of time out in the bright, cold snow, after all). The eyes are a light grey-blue, to match his overall color scheme, and to give him a Nordic look.

After the cheeks and eyes were painted on, I sealed Santa with a coat of matte acrylic varnish. When that was dry, I mixed up some of the same varnish with just a few drops of burnt sienna and one tiny drop of ultramarine blue, so the mix was a very thin brown. I brushed this over the sealed Santa, allowing the pigment to flow into the deeper laugh lines and around the eyes and nose. I then finished covering the rest of the beard and hat, and the very light brown helped to bring the colors together. These two coats of varnish will make it easier to wipe the dust off Santa next year.

I added two white highlights to the eyes, used my glue gun to attach a wire hanger on the back, and he’s done.

If you make a Santa of your own, please come back and show him off. I’d love to see how your Santa turns out!

43 thoughts on “Painting Your Santa”