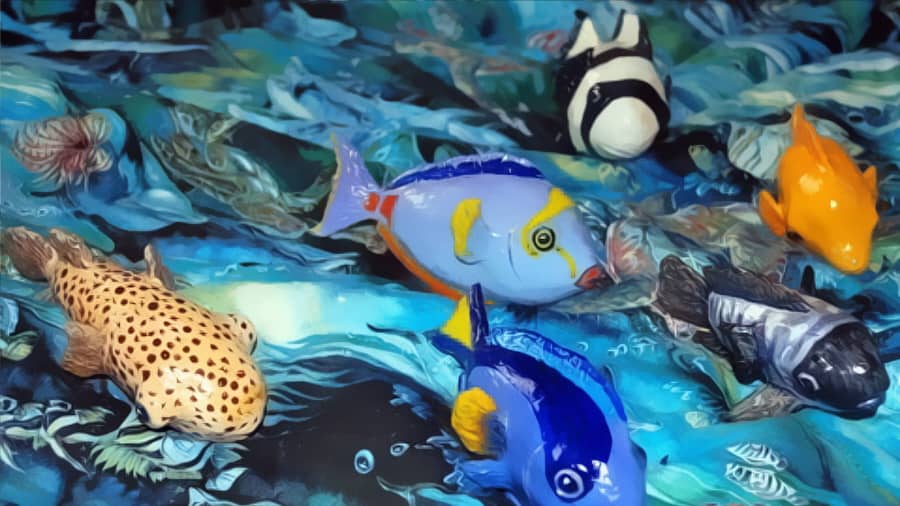 Rex Winn recently showed us his delightful school of reef fish on the Daily Sculptors Page, and today he shows us how he made them.

This would be a perfect project for a class or group of friends because all the fish are made the same way but they all look dramatically different.

My baby brother’s birthday is coming up, and beach-combing is one of his favorite activities. A cabinet contains his treasures, and he needs a few fish to liven it up. (So I say.)

Here are the six little creatures I’ve made him.

I used two reference sources: (1) the instructions on making a fish from Jonni’s book, “Make Animal Sculptures,” and (2) her video on William the Hippo.

I had great fun doing these, and I used a few of her attitudes, processes, and psychology from her latest book, “Fast Faces“: I asked myself throughout making these, “What did I learn?”

I created patterns from photographs and drew them on tracing paper (photo 1).

Then I copied the patterns onto cereal-box type cardboard (in other words, thin). (I have old carbon paper I used, if you’re old enough to know what that is.)

I cut out pelvic and pectoral fins using the same method, leaving a “wedge” on the fins that was glued onto the fish later.

Creating the armatures for the reef fish sculptures:

I crumbled foil and glued it to one side of the fish using a hot glue gun. The purpose of photo 2 is to show the pattern on the cardboard.

I wanted to keep the pattern visible while working on the other side (where there was no pattern to follow). This worked out well later when placing the eyes and fins.

NOTE: What I learned here was I wish I had been aware if the fish were going to be standing on a shelf or hanging (or something else).

This particular fish is the Damsel, the black-and-white striped fish. If I had one fin about 1/4″ longer, the fish would have stood on its fins. (I have to add that my fish rarely stand straight by design. I like them leaning to the side because I like the attitude.)

I crumpled aluminum foil and, using a hot glue gun, glued the foil onto the cardboard.

I kept Jonni’s words in my head, “Don’t squeeze it tight.” In other words, you can work with the shape if it has give.

One wonderful thing about using foil is you can roll the side of the fish on a surface and the foil takes a rounded fish-shape instantly. (Much easier than paper and masking tape, especially on something this small – 4-6″.)

I then covered the remaining fins with a single layer of foil and glued them on.

A wonderful surprise was when I pushed the “wedge” into the foil, a hole remained. Not only did I know exactly where to place the hot glue, but the cardboard on the fin disappeared into the body left by the hole, and I did not have to “fix” this with clay later on.

Adding the paper mache clay, then the air dry clay to the fish sculptures:

In photo 4, I added a very thin layer of paper mache clay. I tried to barely cover the fins, letting the foil show through rather than make the covering thicker.

Photo 5 shows the six fish with fins attached. One fish has clay on it.

All fish have foil on just one side. I added a small round ball of foil for the eyeball using the placement from the pattern on the opposite side.

Photo 6 is a top view of all fish after foil was added on the second side. I glued the fins and eyes using the pattern on the other side. Every fish had very different placement of eyes and fins.

Next I added a thin layer of Jonni’s smooth air-dry clay making certain all aluminum foil was covered. This photo shows me adding texture to the fins.

For the yellow fish, I used a warm yellow (Cadmium Yellow Medium) and white paints. On the cool-colored fish, I used a cool yellow (Hansen Yellow.) I think this helped keep the colors in harmony. 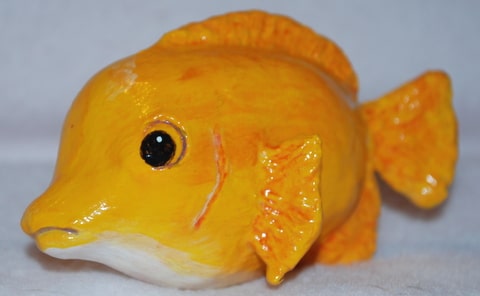 One thing I did not learn until finished was I did not think about whether the fish would stand or hang. Four of them stand, and two of them need a leaning post.

If I had considered the engineering in making the pattern, I think I could have made them all stand.

My brother will have to decide for himself what he wants to do with them, but I am going to tell him if he wants them to hang just drill a small hole in the top fin and add a swivel hook so the string will not get tangled.

I have to give credit to someone on this site for that, but I can’t remember who used that technique. Thanks to her, I have swivel hooks on hand!

9 thoughts on “Reef Fish Made with DIY Air Dry Clay”