This spider was one of my first paper mache projects, I wasn’t very careful about how I made him and after moving he’s pretty beat up. When I was making him I was very insistent that his legs hold him off the ground but after being jostled around in a box they’re all bent out of shape. So I decided to redo him. I’ve also been dying to try out Jonni’s Paper Mache Clay recipe and her Air Dry Clay recipe do I thought I would use those to redo my spider!

My original plan was to cover his body in the paper mache clay, his legs in the air dry clay, and make new pincers with the air dry clay. So the first thing I did was reposition the legs and take out the pincers.

Next, I started putting on the paper mache clay. I had a hard time getting it smooth, but then I dropped it and I liked that texture it made so I decided to make him a harry spider!

The next step was to start covering the legs. But even though I repositioned them, they kept bending and collapsing when I tried to do anything to them. So I positioned them how I liked, then flipped him upside down, then covered one leg with air dry clay. But then, the leg was too heavy. So I propped it up and let it dry. But THEN, it still didn’t hold up the spider and just looked bad overall.

So I finally decided to rip out all the legs and make new ones. I gave up on the idea of having them hold him up and decided to have his body sit on the ground with long, skinny, harry, legs coming out on either side.

I made three types of legs, the first one is one of the original legs covered in clay. I already ruled this one out as an option because it was so big, bulky, and the wrong position.
The second option is some clay around a thick wire, this was great except that the clay slid around on the wire and was really hard to work with.
The third option worked the best, I wrapped a thin wire around the thick wire so that the clay had something to hold on to.

It took me a long time but I made 8 long spider legs using the third method.

After they dried, I covered them in paper mache clay and gave them a hairy texture. I wedged them into the joint compound lid and let them dry.

Lastly, I hot glued the legs in the spots where the old legs used to be, then I covered the bases of the legs with air dry clay then with paper mache clay.

I haven’t painted him yet but I plan on spray painting him a dark brown and then dry brushing a light brown.

As for the clays, they definitely take some getting used to but are worth it in the end. I have seen some amazing stuff made with these. I find it easiest to store the paper mache clay in an old yogurt container and the air dry clay in a ziplock bag.

Thanks to Jonni for the amazing recipes!

And thank you for reading! 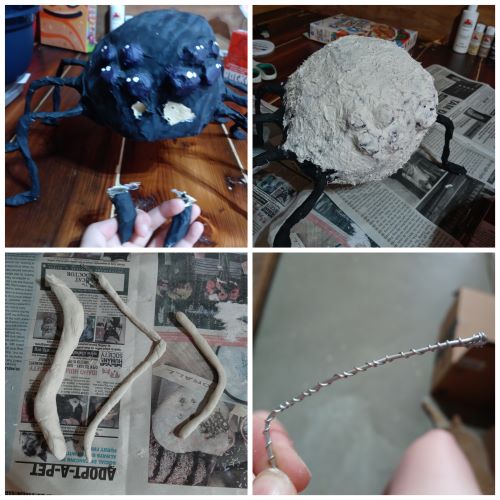 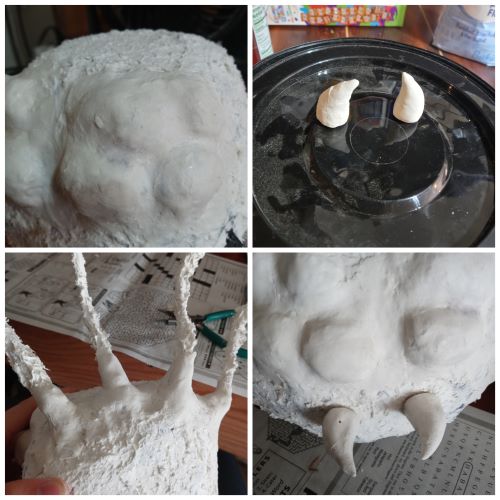 1 thought on “Redoing a Spider”