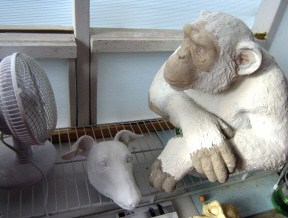 I’ve been working on a chimp sculpture for the last week or so, with no real progress to show for it. Right now I’m waiting for UPS to deliver some more supplies so I can finish the head. However, I did make a poseable armature for the chimp’s hand this morning, and with some minor changes in size and proportions, this could easily work for a human hand, too (or zombies, for that matter). It won’t be covered with the paper mache clay until the entire armature, including that unfinished head, are all assembled. I first drew the chimpanzee’s hand onto a piece of paper, using several references that I found on the Internet. Then I cut 10 pieces of tie wire for the “bones” of the hand. Tie wire is cheap, it’s easy to bend and cut, but it rusts. I like using it for smaller items like this, where you don’t really need the strength of heavier wire. However, you do get rust all over your hands and clothes if you aren’t careful. And it needs to be completely covered before anything wet is added to the armature, or the rust will migrate out through the final layer of paint and ruin everything.

Twisting the wires together to form a wrist. I used two pairs of pliers, one to hold all the wires together at the wrist, and the other one to do the actual twisting. I continued to check it against the drawing to make sure the wires were still in the right place and the fingers were still the right length. I want to be able to bend the joints of the armature before deciding on the final pose. To make sure the bends go in the right place, I wrapped the wire with masking tape, and then marked the joints. The tricky ones are the first knuckle of the hand, where the fingers separate from the palm. Looking at my own hand, I saw that the actual joint is below the line shown on my drawing, which was drawn from the palm side of the chimp’s hand. I want the fingers to bend at the joint, not at the top of the webbing between the fingers, so I marked the joint below the line on the drawing. I covered the aluminum foil with masking tape to make sure everything stayed put. Once the hands have been firmly attached to the rest of the chimp sculpture’s armature, I’ll be able to choose a pose I like before adding the paper mache clay.

I do hope the UPS truck shows up today – I’m really anxious to see how the chimp’s head comes out. I hoped that I could use Super Sculpey over the hollow resin skull I made, but it didn’t work. The Sculpey cracked, and couldn’t be repaired. (Maybe I should have read the Sculpey instructions before starting the project!) My current plan is to use paper mache clay over the resin skull instead of Sculpey. The aqua-resin that I used for the skull (and which I’ll also use as a final protective coating) can be painted, so I hope that also means that the paper mache clay will stick to it. However, I wanted to make a few changes to the skull itself before I re-sculpt the head. Sometimes it’s good to have an excuse to start over, because I get a chance to correct errors that I probably would have been too lazy to fix if everything else seemed to come out OK.

And now my break is over, and I’m off to finish the other hand armature.