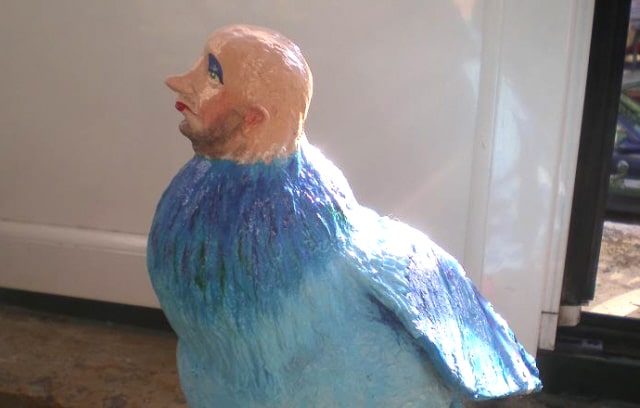 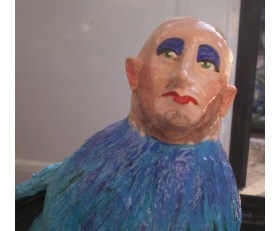 Several weeks ago our friend Pedro Rodrigues from Lisbon showed us some unique paper mache sculptures he’d made that looked like birds with human faces. His sculpting techniques are just as unique as the sculptures themselves, so I asked him to show us how they were made. (He does some amazing things with toilet paper!)

His article is below. Be sure to click on the photos to see the images in a larger size. And thanks, Pedro!

Sorry it took so long, but I’m sure you know that working on creative work isn’t as consistent as it should (time wise).

Thank you for your invitation on writing an article and, of course, to all who commented the previous pieces!

Indeed I did a swallow but when I saw your invitation to write an article the swallow was already started and nevertheless I thought it could be a little bit too “simple” technique wise, so I decided to make a pigeon.

Here in Lisbon there are lots and because they are always being fed they are always in the mood for love, so I wanted to portray one male pigeon whilst dancing to conquer his bride to be.

I decided to number the photos and describe the steps, thought it is an easy way to write down and show the process.

Photo 1 – first I always start with a balloon armature with 3 layers of newspaper glued with flour (made my peace with flour glue because I noticed that for simple layers it doesn’t get moldy as in thick pastes). 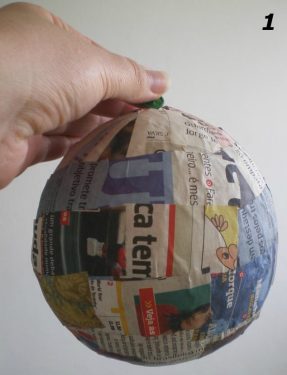 Photo 2 –This is the half a rubber ball armature which I used to make the neck. 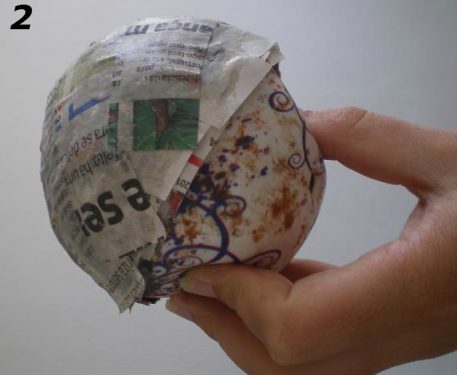 Photo 3 – From a kinder surprise egg I made the back of the head. Didn’t took photo but the neck was made with a roll of paper stuck on the figure and the face is made out from a silicone cast shape  that I made for faces (for another project that I’m working on for over two years). 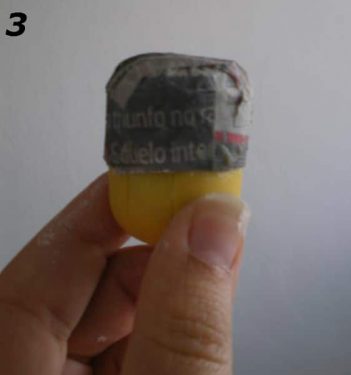 Photo 4 – As you can see the main figure is assembled. 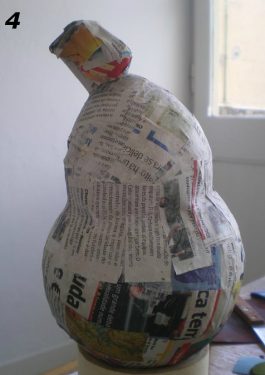 Photo 5 – Cardboard for the wings and tail. 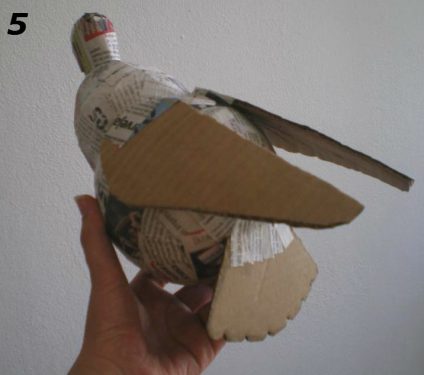 Photo 6 – Aluminum foil glued into the face to “sketch” the nose, mouth and the brows area.

Photo 7 – So now I start to model the outer face with rolls of toilet paper. Toilet paper is just an amazing material because although it looks fragile, its really strong if you know how to deal with, plus its amazingly plastic too!

The technique though is easy. I start by covering the area with white glue and then set the rolls of toilet paper and give another good brush of glue on them. After dried I cover the roll with a piece of plain sheet depending on the texture I want. either still wet or half dried you can smear it in order to create either texture or layer.

On this photo though I’m only building the neck shape. 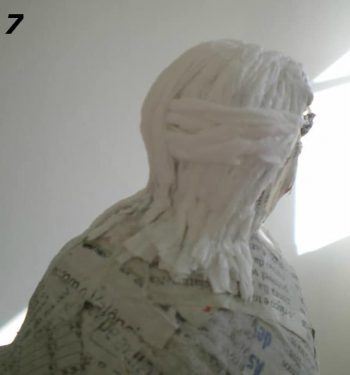 Photo 8 – So now I have the head and the crop done and ready to dry. It doesn’t matter if you put another layer before the first dries because its glue anyway. Normally a layer takes 30min to 1 hour to dry (we’ve been having a nice warm spring!). 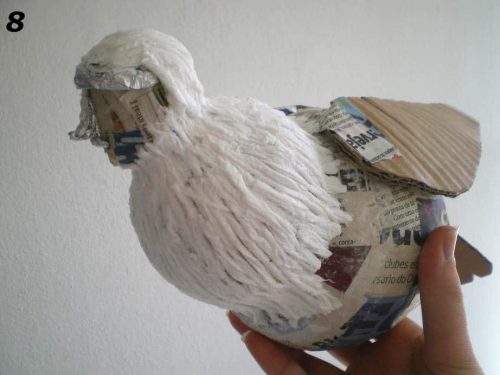 Photos 9a and b – The tail was made, like I said, with cardboard structure and with toilet paper rolls and then after dried all was covered with plain sheets of the same material (on 9b I had to redesign the tail. 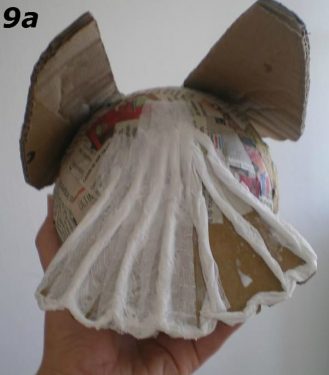 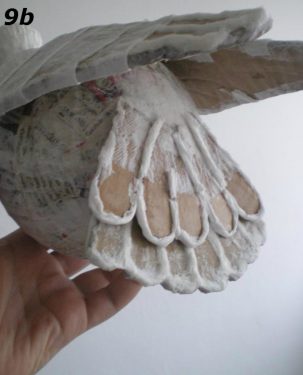 Photo 10a and b – The wings effect was made also with toilet paper rolls but this time I’ve bent them to create a nice wavy effect. For the rest of the wing I glued a sheet of toilet paper and reversed the direction thus its aspect. 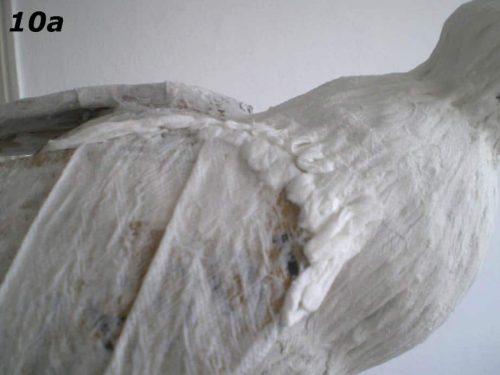 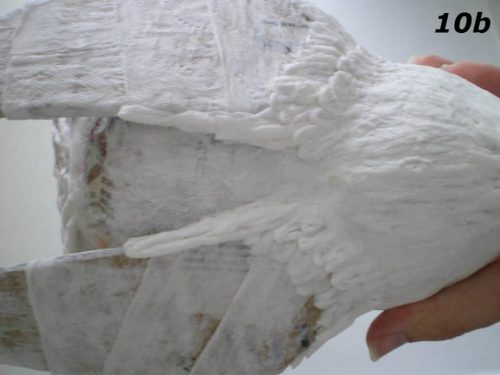 Photo 11 – The legs are made with two rolls of newspaper stuck on the figure and on the base (again from another half rubber ball), feet are made with rolls of toilet paper and a air drying nail. Then I glue sheets of the same paper and depending on the security of the legs I add some air drying modeling paste and at the end I cover all with liquid cold porcelain. 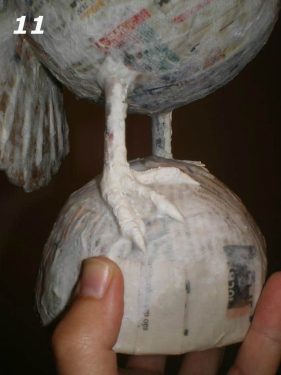 Photo 12 – After I modeled the face with air drying modeling paste and after finished as well as the whole piece, I coat the base with liquid cold porcelain (just a simple mix of potato starch and white glue) to avoid lumps and in some fragile parts of the sculpture because once dried it will help to make it harder (on this one I covered the wings and, as written above, the legs). 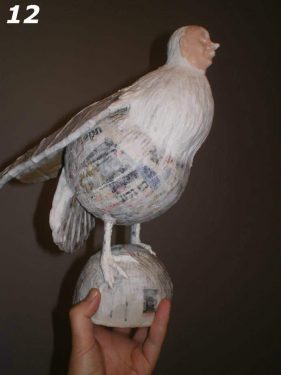 Last but not the least I paint with acrylic colours and normally give a coat of varnish (not as much for protection, more for its shinny effect! 🙂 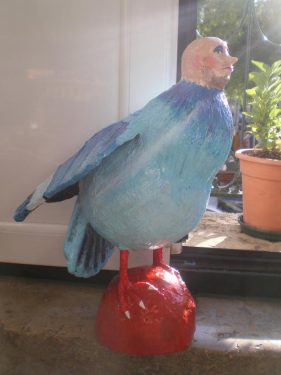 In the middle of it I started to feel a bit bothered because I was already seeing some sort of “factory” looking all a bit the same, so I decided to go a bit wild (paint wise) and … don’t really know who he is, just doesn’t look the “macho man” I had in mind when I started it! Eh eh eh 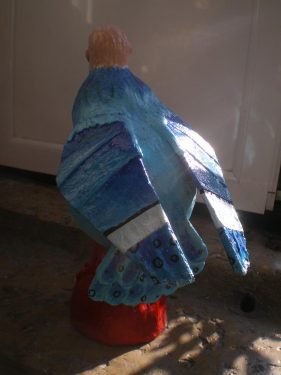 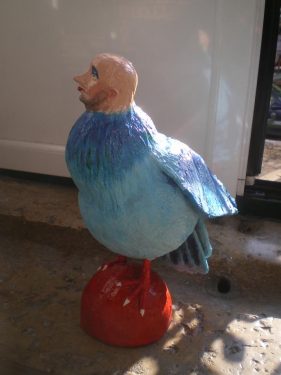 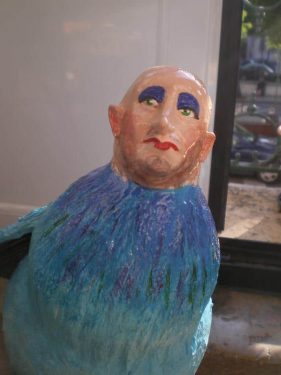 Please feel free to ask if there is anything to clarify!

Many thanks, warmest regards from Portugal,