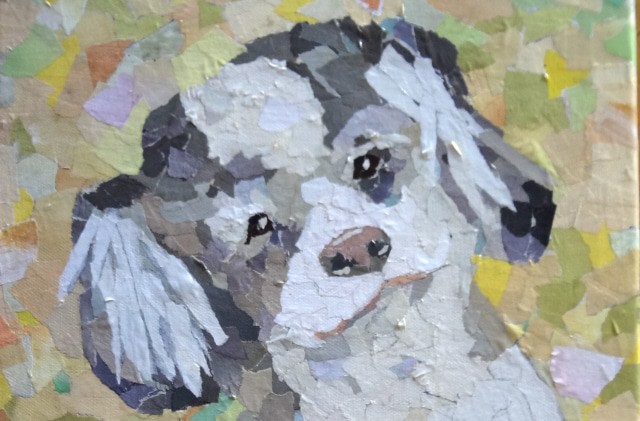 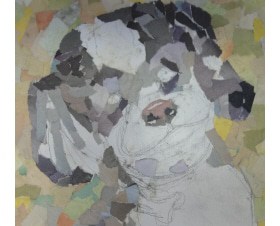 We have a real treat today. In this guest post, Nancy shows us how she “painted” a portrait of a sweet little dog using torn scraps of colored paper on stretched canvas. In the image on the right, you can see how the portrait is is starting to come together as she carefully adds layers of color over her original sketch. You can see how the portrait looked after it was finished at the bottom of the post.  Thanks, Nancy, for sharing your technique.

Hello everyone! Thank you for allowing me to share my paper mosaic painting process. My name is Nancy Coffelt and I’ve been working as a fine artist since 1984. I also write and illustrate children’s books. Until a year or so ago my primary medium was oil pastel. I enjoyed the flat planes of high contrast color as well as having fun with whimsy and movement.

I decided to switch it up when my husband and I made the move from my hometown of Portland, Oregon to a small town in Eastern Oregon. The difference in community, landscape and climate seemed to challenge me to change my style as well. I chose paper mache after seeing the works of Will Kurtz (love those dogs!), and after some web surfing found the wonderful Ultimate Paper Mache site. And unlike expensive pastels, my new colors were free. Much better for the budget. Along with playing with sculpture, I also began “painting” on canvas with the paper scraps.

To begin, you need color and that means magazines—lots and lots of magazines. I get them from friends or for free at the library. My local library even posts on Facebook which magazines they’re rotating out every week. I prefer the high gloss magazines such as Oprah magazine, Sunset, Rachel Ray, Martha Stewart and the like because the colors are so saturated and the whites and blacks have more contrast. You’ll see pretty quickly if a magazine’s colors (especially the black inks) are muddy. (I’m looking at you, Sports Illustrated.) I then separate the colors and store in bins. I also keep a bin for pastel colors for softer backgrounds. Tearing apart magazines to sort for colors can be time consuming, but Netflix can be your friend here. 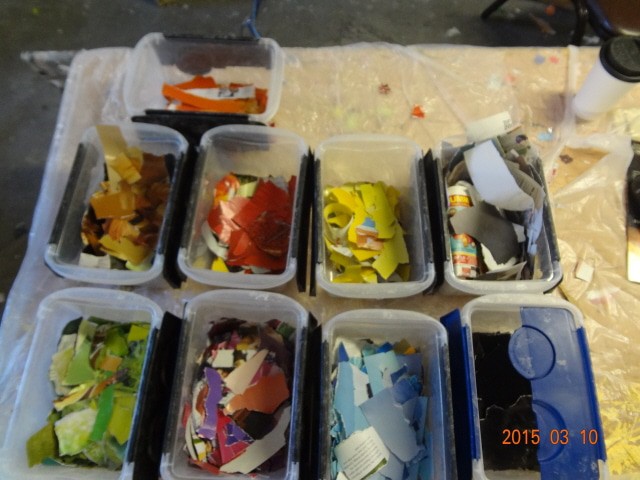 I have experimented with canvas board for mosaic paintings, but I have found that they warp. I use stretched canvas and prefer the deeper profile (1 and ½” sidewall) canvasses, but since someone gave me a bunch of ¾” sidewall canvasses, I’m working my way through them. If the stretcher bars DO warp a bit, they can be straightened by dampening the boards and weighted overnight to flatten. I put them face down and stack a couple of cinder blocks on top of the stretcher bars. This is always the last step!

For this project, I had received a commission to create a portrait of this little guy: Benjamin.

The first thing I do (after amassing the colors in the bins) is sketch Benjamin onto the canvas.

I don’t worry about it being perfect as it will be covered in the paper scraps anyway. I like to use at least three reference photos when creating portraits. I never try to recreate any one photograph. Instead I strive to get an impression of the animal through the different poses and descriptions of them from their owners.

Next, I select a background color scheme. I have found that by staying fairly consistent with the color background allows the subject to stand out better—as with this cow dog against the blue.

With Benjamin, I decided to vary the background colors but made sure they were all the same consistent color value (the relative color lightness or darkness). Then I began laying in the background. Because the dog is in front of the background he goes on after. I use Jonni’s boiled flour and water paste recipe. And I am a dipper. I submerge my paper bits before putting them on the canvas. They stick very well—no need for any sort of pre-prepping.

After I finish with the background color I lay the canvas onto the heater grate in the building my studio is in. Because my paper is so wet the colors aren’t true. There’s no way I can see the true color and value again until it’s dry.

Benjamin appeared to be gray and white in the photos but I could also see hints of blue and lavender. I mixed those in when I tore the gray paper. I tried to make each scrap about the same size as a tuft of his hair. That’s how I could make him look “furry”.

I start with the darkest colors (except for the eyes) and then add some medium grays to see how my contrast is working out. If I’m happy with the colors and the contrast I lay in all of the gray short fur.

Here he is about halfway done. I haven’t begun the white and very light gray fur yet. I have waited to begin the eyes. And you’ll see that I changed my mind and didn’t include the collar and bone tag. I didn’t want to have straight edges in all his nice fuzzy fur. This stage is the most challenging for me because halfway done usually looks so awkward!

Next I tackle the eyes. I don’t go for a lot of detail in the eyes as that can make them look beady. Instead I rely on the dark of the pupil contrasted with a white shine mark. I can lay down AND scrape off eyes a few times before I’m happy with them. Paper mache is such a forgiving medium. After I’m happy with the eyes, I lay the white “eyebrow” hairs over them and add the long strips of white paper for the ear fringes. The chest white areas on the head are the smaller “furry” pieces and I’ve thrown in some ultra-light gray with the white for dimension.

After everything is dry (about 2 hours on my heat grate) I brush on a coat of polyurethane. That seals the paper, gives it the shine I like (I use gloss) and I hope it adds maybe a little bit of UV protection. I have no idea how lightfast these colors are!
All done!