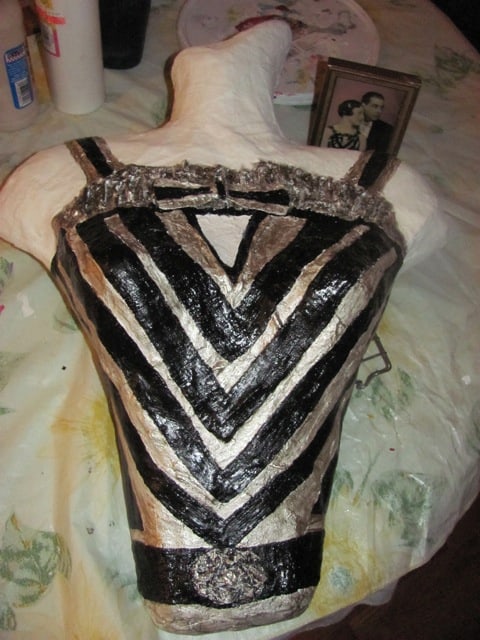 Today’s guest post is by Barbara M. Kaplowitz, who offered to tell us how her interesting sculptural piece was made — and what all the individual design features mean to her. I love the way she created a piece that will be such a strong reminder of her mother – and it is a beautiful piece of art, as well. So, from this point on, here’s Barbara (be sure to click on all the photos below to see them full-sized:

I am sending along a photo of my most recent papier mache project. The dress design is taken from the dress my mother is wearing in the photos dated 1936. The necklace is hers as well. Â I had the two photos reframed to match the art deco design and have them all on display in my foyer.

Here is the birth of my project: I bought a papier-mache mannequin (pink one in photos) in a vintage shop in old town Leesburg, VA. The owner had 7 different forms on her walls and I mentioned that I could see them all dressed in vintage clothes of the Art Deco period.  So I bought one to use on my project. Â (had no idea when I went to lunch with friends that I would come home with a dirty old mannequin!)

When I got home I realized the mannequin needed work to smooth out the ridges and grooves from use and age. I worked with self – drying clay and worked it in all around and sanded the many white areas.  When it was dry I used the original mannequin as the armature and produced a second mannequin made of papier-mache by putting newspaper and glue over plastic wrap on the armature.  When it dried, I pried it off.   Voila! I had two!

I painted the new one (white one in photos) with lots of gesso and let it dry.  Then realized I had the photos of my mom and dad and her dress was perfect for the mannequin.

I used plaster tape which served as papier mache fabric and formed the dress design with strips to form the striped pattern on the body of the dress.  I made the belt by scrunching the wet plaster tape and the straps were scrunched too a bit to show folds.  I also made folds randomly on the body with the strips.  I made a bow and added that too.

When dry I found wonderful metallic paint in black and champagne colors which represented the colors on the photo.  After several coats of paint and touch up I sealed it with matte Modge-Podge. I drilled a hole on the form in the back and placed it over a nail in the wall.

I had the 2 photos reframed to match the mannequin and hung them together above other family treasures on the table.

So there it is in a nutshell.

Thank you, Barbara! And now, here’s the photos she sent so we can see how the piece was made.

6 thoughts on “Paper Mache Wall Art with a Sentimental Twist”