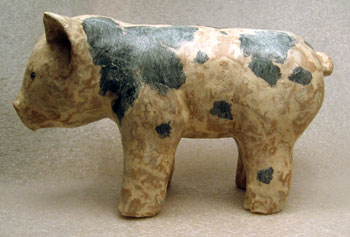 Piggy banks can be made with as much detail, or as little, as you like. For that reason, a piggy bank can be a good project for the beginning paper mache sculptor, and just as challenging for the advanced student. To see what I mean, take a look at the piggy banks over at wikipedia.org.

I decided to use a mini pig photo as the starting place for my piggy bank, but I simplified it a lot. And I did very little painting on the final bank, so the project was fairly easy. I was working towards a fake antique look, so the paper and paste show through the final coat.

Total cost: less than $1, since I already had some paint and Verathane on hand.

I start the project with an empty salt container for the body, and four equal-sized scrunched-up paper legs. Some people try to make piggy banks and other simple paper mache projects using balloons for the inner form, but I think balloons are much too difficult to handle. The salt container in this project adds strength to the finished bank, so only a few layers of newsprint and paste are needed. (If you want your bank to be bigger so you can save more coins, you could use an oatmeal box, instead).

The legs are taped to the bottom of the salt container with plenty of masking tape.

I make sure the pig can stand up straight without wobbling too much, and then I start to add the padding. Here you can see I added more paper to piggy’s tail end, and I added small bits of paper to the back of her legs so they will have more piggy shape. No animal has absolutely straight legs.

Real pigs actually have very thin and dainty legs, but I don’t think thin paper legs would hold up several pounds of quarters, so I’ve fattened up my piggy’s legs and simplified their shape. I do, however, keep looking at photos of min pigs I found online, even though I know the final piggy bank will not look exactly like a real pig.

I add more padding to round out the legs and give piggy some elbows and hips. I also add the head. A baby pig’s head is as tall and wide as her body, with a very short neck. I’ll be doing a lot of pushing and prodding and taping to make the inner form the way I want it, before I add the first piece of newsprint and paste.

I added the snout, ears, and tail. I also taped the feet to a piece of cardboard, which will be removed as soon as the first layer of paper mache has dried and hardened. This step was taken to help make sure the bank will sit level when it’s completed.

The first layer of newsprint strips have been attached with a simple flour and water paste. Any low spots have been leveled out with extra paper, and piggy is then left to dry out completely before the second layer of paper is added. [This is the only part of this project that I would now do differently. The paper mache clay recipe had not yet been developed when I first posted this tutorial in 2008. I would now do the piggy bank using the recipe, which you can find here. However, that’s just a personal preference. Paper strips and paste work just fine and they do create a really strong piggy.]

For the second layer I used brown paper, like the type used for brown paper bags. The paper is stiffer than newsprint, so I take care to make sure to use smaller pieces of torn paper, and smooth it down carefully. In this photo most of the second layer has dried, and I’m finishing up around the ears and feet.I also cut a piece of light cardboard to add to the snout to give it more definition. The cardboard will be completely covered with a layer of brown paper.

After the brown paper layer is completely dry, I sand it to smooth off all the rough edges, and use black paint for the random spots and piggy’s eyes. When the paint is dry, I use a wash of white paint, diluted with some latex glaze, to lighten the black spots a bit. I add the glaze a small bit at a time, and then rub most of it off with a paper towel. When the glaze is dry, I add a final coat of water-based verathane. Both the glaze and verathane were left over from other projects, so I didn’t buy anything for this project. (Whenever possible, I buy my “art supplies” at a hardware store. A tiny bottle of varnish from an art store would probably cost more than my quart of verathane. Since I have a limited income, I wouldn’t be able to play around much with art projects if I didn’t count my pennies.) [The mottled brown on the original piggy bank comes from the paper mache paste over the brown paper. I really like the way it looks. If you decide to use paper mache clay instead of paper strips and paste, you won’t be able to make your piggy look exactly like this one – but it would still be very nice. I’d probably give it a wash of very light pink before adding the spots.]

Piggy is now ready to start collecting pennies and quarters. This bank will eventually be given to my grandson, but he’s only 18 months old now, so he can’t have the bank yet (he would eat the quarters).

[My grandson is now 5 years old, which shows you how long ago this tutorial was first posted. As soon as I hit the publish button, my computer is going into a box. You won’t be hearing from me again until I’ve arrived in South Dakota and I get the internet service hooked up. See you then!]