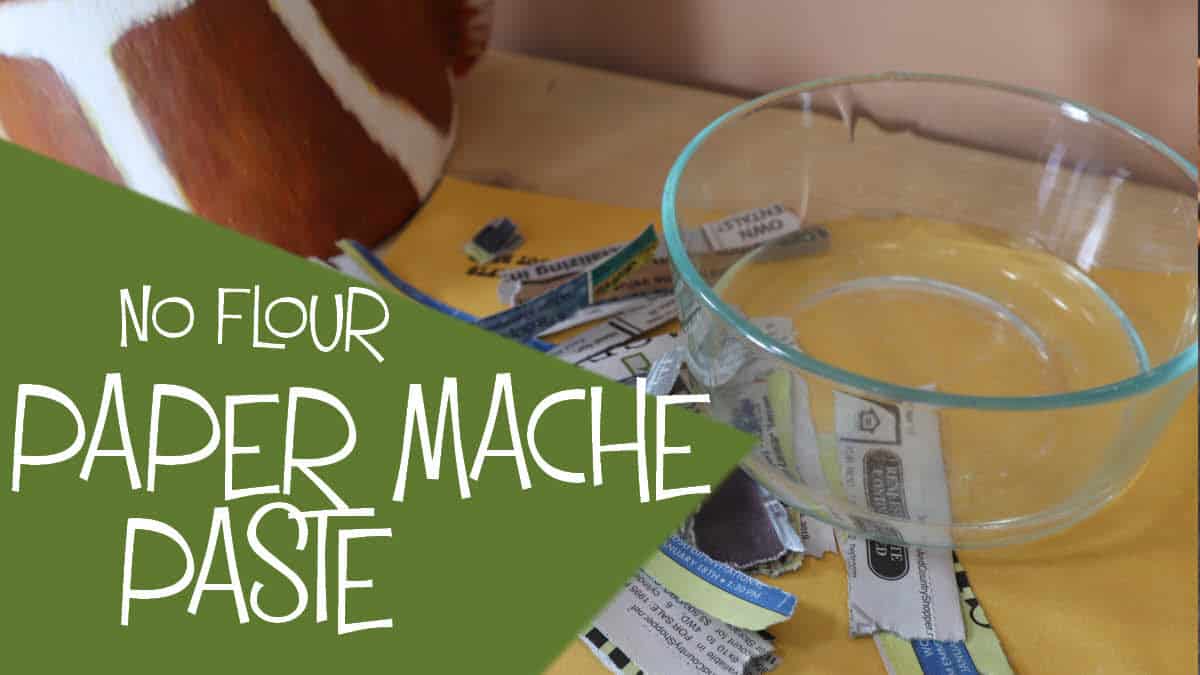 I confess that I  like using the traditional paper mache paste recipe, with plain old flour and water – but I don’t live in a super-humid environment, either. In some areas, the threat of mold is the biggest reason why people avoid creating sculptures with paper mache.

Fortunately, there is an alternative paper mache paste that doesn’t attract mold.

Yeast doesn’t like it, either. Wild yeast makes traditional paper mache paste turn dark and smell icky a few days after it’s made, because the paste is trying to turn into sourdough pancake mix.

That’s not a bad thing if you want pancakes. But it’s not good if you’re making a paper mache sculpture or mask.

So – Elmer’s Art Paste to the rescue. My local Walmart doesn’t sell it, so I ordered mine from Amazon.com. I paid a little over $5 for a tiny carton that makes up a gallon of paste.

That’s a lot of paste.

And it seems to be indestructible, even when left on the kitchen counter for months. Guess how I know… 🙂

And just in case you’re wondering – yes, you can use this paste with any of my mask and sculpture patterns.

Making this paste couldn’t be easier, and the total hands-on time is less than 30 seconds.

Step 1: Measure the powder if you need less than a gallon. 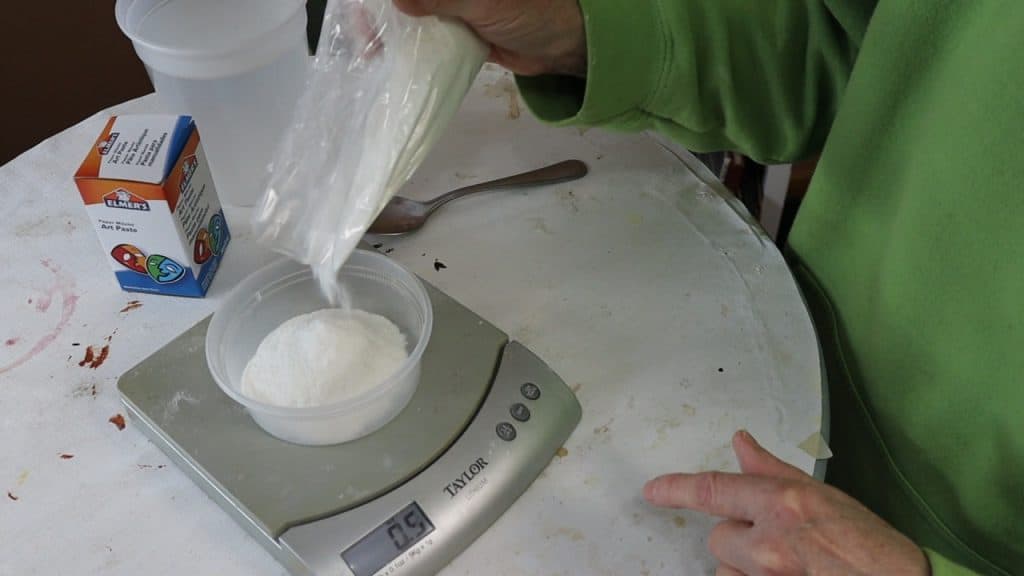 Because I wanted just one quart instead of the full gallon, I needed one quarter of the 2 oz box, or .5 oz.

I pulled out the kitchen scale this time because you were watching over my shoulder, but the last timeI just guessed. And it still worked just fine.

If you have a really big project, or if you’re making up a lot of paste for a class or workshop, you can use the entire carton with one gallon of water.

Don’t worry about making too much. Elmer’s Art Paste is made with Methyl Cellulose, and it seems to last forever. 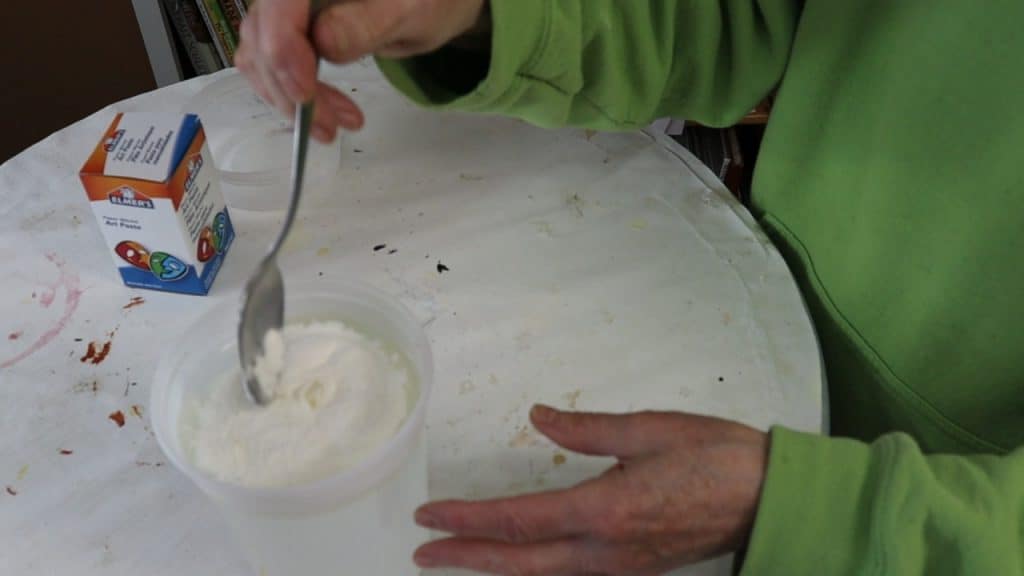 Add your Elmer’s Art Paste to cold water and stir.

Let the mixture sit for fifteen minutes. When you come back, it will be slightly thicker and ready to use for your next paper mache sculpture or mask. 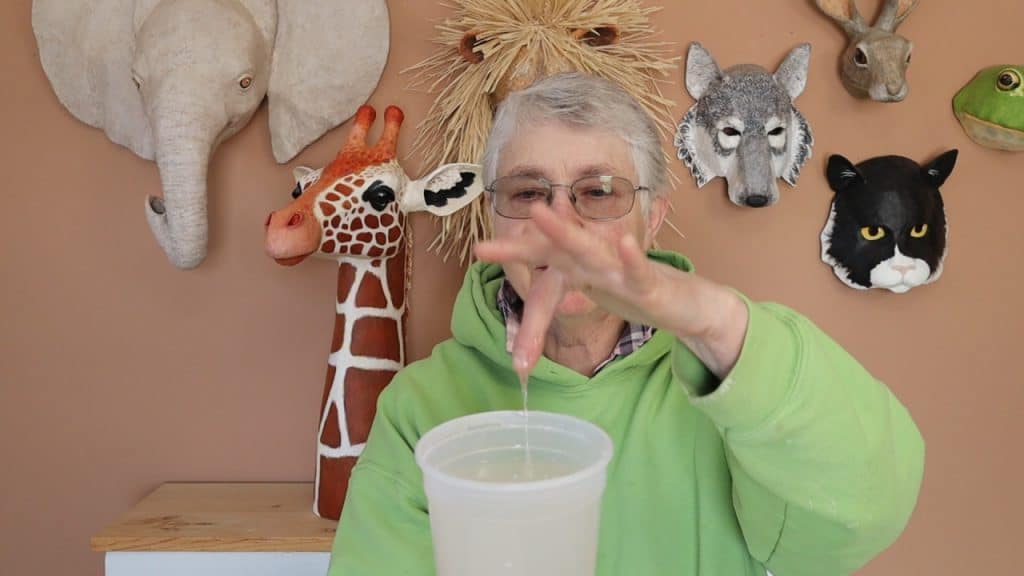 The mixed Elmer’s Art Paste doesn’t feel the same as the flour and water paste. It’s slick, and looks like Elmer’s Clear glue.

Step 4: Use your paste for your next sculpture or mask.

See this post for 5 Tips for Adding Paper Strips and Paste.

Other no-flour options for paper mache:

Some people like to use white glue mixed with water instead of paste. I don’t like the way it feels on my hands, but that’s just a personal thing. I also found that the paper doesn’t get wet enough to lay down smoothly on my armature, but that might be a personal thing, too.

Wood glue mixed with water dries faster than ordinary paste. It also dries on your fingers and it’s hard to wash off. But if you’re in a hurry and if your armature is solid enough so you can get away with just using one or two layers, try Titebond glue (and wear gloves to keep it from drying on your hands).

Some people recommend using corn starch instead of flour to make a gluten-free paper mache paste. When I tried it, the paste took a long time to dry because the corn starch pulled water out of the air. Other people swear by it, though.

If you know of a paste recipe that doesn’t attract mold, yeast, insects (or cats), and that’s gluten free, let us know in the comments below.

21 thoughts on “Paper Mache Paste with No Flour. Easy, Gluten-Free, and Cheap!”