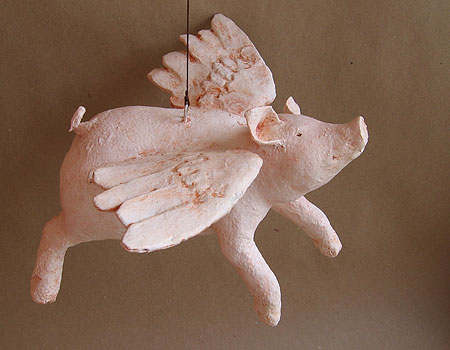 This paper mache flying pig was a fun project.

I won’t give detailed instructions, since it was made primarily the same way that the paper mache bunny was made.

Once the first two layers of paper strips and paste were dry, I “cheated” by using small amounts of Super Sculpey to form the details of the face and feet. I covered the Sculpey, and the rest of the pig, with pieces of single-ply paper towels, like I did when I made the dragon. The towels have a nice “pigskin” texture.

I dried the “skin” layer in the oven, at about 250 degrees F, which dried the paste and hardened the Sculpey underneath. That way I could leave the plastic clay inside instead of removing it. This is an easy way to get nice details on a paper mache sculpture. (I also used this plastic clay, in slightly different ways, when I made the short-eared bunny and the giraffe’s face .)

I then covered the sculpture with several coats of paste made with white flour, carpenter’s glue, and water. This softened the texture of the towels a little. Then the pig was painted with latex glaze from the hardware store, to which I added white and a pinch of red ocher to make that Caucasian pink that domestic pigs are famous for .

Then the flying piggy got a finish coat of Minwax water-based Polycylic with a pinch of red ocher added. The Minwax was brushed on a small area and then rubbed off with a wet paper towel to bring out the texture of the paper.

I haven’t been making many paper mache projects this winter because the only spot in my house that gets good light is my unheated front porch. Then when it started to get warmer the porch was taken over with seedlings for my flower and veggie garden. I hope I’ll soon have my “studio” back, so if you have any suggestions for projects you’d like help with, let me know. I’m always looking for ideas…