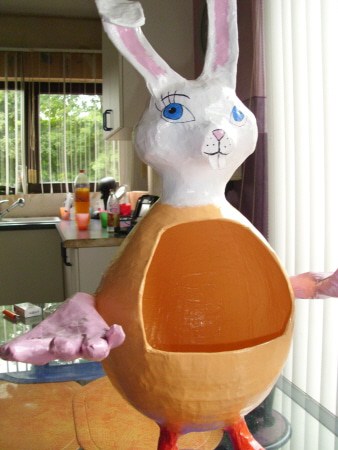 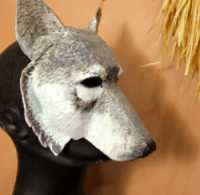 Make This Wolf Mask Today.
The pattern makes it easy, paper mache makes it strong, and you make it memorable with acrylic paint.

Or see the entire collection of Animal Decor and Mask Patterns here.

Today’s guest post is by Jelina de Klerk. You may remember her from the Fantasy Animal that she submitted for our collaboratively-written Practical Paper Mache ebook. According to her new website, Jelina is an 18-year old student living in Belgium. She took progress photos of her latest creation, another fantasy creature, and she shows us how she put it all together with paper mache and a lot of imagination. And now I’ll turn it over to Jelina:

This is my second paper mache project in my whole life. My first one is the fantasy animal with the head of a giraffe, you can see it on the practical paper mach page and in the eBook from Jonni.

So, after my first project I realized that I really liked it so I decided to make another fantasy animal. The inspiration came from a dream from my mother, yes, really weird.

I draw the idea on paper and I started.

After a few weeks my dad made a big hole in it.

The idea was to make an egg with a door, but I changed it because I thought it was better without a door.

The next thing I did was making the duck feet, those were not easy to make.

They donâ€™t really look like duck feet â€“ I know â€“ but they were good enough. Then I made a tail, also out of chicken wire. Itâ€™s the tail of a kangaroo.

His head and hands were the most difficult. I made the head out of a ball of crumpled newspaper, the ears I made of wire with tape.

The hands were made out of a plastic glove, filled with rolled newspaper. I added some wire to some fingers to bend them.

I taped the hands to a piece of chicken wire that I rolled and bend like arms and taped it to the egg. I re-made this twice because the arms were too long.

I also made the hole smaller, it was way too big.

After a few days, when I had more time, I started doing the paper mache. And it looked better after it.

And then I let it get completely dry, and a few days after that I finished it. I did 3 layers of white paper And I did those little thingies between the toes of the duck feet. I did it with a piece of cloth, dipped in the wallpaper paste and putted it around the toes, one on top and one at the other side.

Then I painted it. I tried to let the colors of the parts flow into each other as you can see at the tail.

And these are some pictures after I varnished it, added some eyelashes and whiskers. So I made it female – if anyone thinks of a good name for her, just let me know! (on some pictures the whiskers arenâ€™t added yet, because they were drying while I took the pictures)

The finished project is more beautiful then I first thought and I hope you like it!