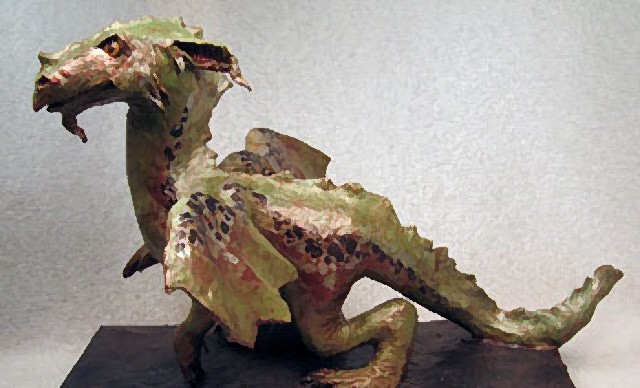 This dragon is the very first project that I created for this blog, back in November of 2008! I can’t believe it’s been that long. Even after all that time, this dragon is still one of the most popular projects on the blog.

For months now I’ve wanted to go back over some of the older posts and projects and show how I would do things differently if I did them over. Now that all my art supplies are in boxes, waiting for the final papers to be signed, it seems like a good a time to revisit some of these old post and see what we’ve learned since they first appeared. (I decided to rent a really cute house in South Dakota, by the way – I know some of you have been wondering where I would end up. And yes, I know it snows in South Dakota, and it gets really cold – that’s why I’m renting. I thought it might be a good idea to check to place out for a few months before making a final decision. 😉 )

I’ll put the original instructions in regular font and add my revised suggestions in red. Since this dragon came out rather nice, there’s really no reason to change anything about the methods unless doing it differently would make it easier. (If you have any suggestions of your own, please let us know in the comment section of the post).

This dragon is made from newspaper, paste, masking tape and paint. The total cost was under $5 – an art project for the true cheapskate!

The first step in making a small sculpture from paper mache is to create the basic form. For this project I used newspapers twisted into a general shape and then wound together with masking tape. For inspiration, I looked at the beautiful drawings of dragons in the book Dragonology: The Complete Book of Dragons

Note: Be sure to keep any books or other items a – l o n g – way away from your paper mache projects – you’ll be making a big mess, and you wouldn’t want to ruin a nice book.

I create both hind legs before attaching them to the body, so I’ll know they’re both basically the same size. The legs are attached so the top (hip) is near the dragon’s backbone.

I don’t pay any attention to details, like toes, in this stage. I’m just trying to build the general shape of the dragon, and give him (her?) an interesting posture.

How I would do it now: I had real problems when I made this dragon, because the weight of the wet paper mache caused the crumpled paper forms to sag. I kept propping it up so that the legs would hold their shape, but it was much more work than necessary. If I did it again, I’d make a cardboard pattern to go inside the crumpled paper. The cardboard creates a template for the finished form, and adds strength to the armature so the paper mache won’t weigh it down. I think my echidna was one of my first projects using a cardboard pattern. And I posted a pattern for a different dragon here.

The back legs are taped on, and now the front legs are being attached. I include the shoulder section in the leg, and I continue to add masking tape to cover the paper. The masking tape helps make the inner form stronger.

Now the tail has been added, along with some spiny points along the backbone. Then the tail and hind legs are taped securely to a board. (The wooden base would not be needed if the armature was stronger and balanced – another good reason to use the cardboard pattern).

The wings have been added. The wings are first made with a twist of paper in the same shape as a front leg (arm?) and attached to the body. I then cut some cardboard from a cereal box and folded it like a fan. This has been taped securely to the wing’s ‘bones’.

Adding wings to an animal that already has front legs is a real challenge, because the front legs are attached in the place where wings would go. (Wings are front legs, with feathers added). One can only hope that the final sculpture will look halfway reasonable.

Now for the fun, messy part. I dip each torn piece of newspaper into the flour and water paste, and then wipe off the extra paste against the side of the bowl. Then the paper is laid on the body and pressed down as smooth as possible.

This is continued until the entire dragon has been covered. I also covered the masking tape that holds the dragon to the board.

How I would do it now: I don’t use paper strips and paste very often now, since I developed the paper mache clay recipe. However, if you don’t mind making a bit of a mess, laminated paper is very strong when it’s dry, and you can make beautiful things with it. I posted recipes for several different variations of paper mache paste here. (I like the easy one, plain raw white flour and water.)

The weight of the wet paper will cause the form to lose it’s shape, so a paper roll props up the dragon until the first layer dries. (Again – this would not be needed if the armature was stiffer.)

Once the first layer is completely dry, another layer is added, the form is propped up again, and allowed to dry again.

My sculpture will not be played with, so it only needs two layers of newsprint and paste. Once these layers have dried, the form is strong enough to stand on it’s own.

Now the features are added with tiny bits of paper towel dipped in paste. In this photo you can see I’ve added the mouth, eyes, nostrils, ears, and chin whiskers. (The technique of wetting paper towels with paste and using the mushy goo as “clay” works really well. If you decide to use the paper strips and paste, be sure to try adding the features this way. For even finer details, you might even try toilet paper and paste.)

The toes have also been added, and a layer of paper town has been added to the rest of the dragon, because it produced a very nice leathery texture. (I used this same technique to make the leathery skin on my baby elephant. Textured paper towels are fun to play with.)

How I’d do it now: OK, this is something I’d definitely do differently. The layer of paste tends to crack, and a lot of people who tried this method were not happy with it. I would now use one of the gesso recipes here, or a commercial gesso from the art store.

The dragon is now painted with antique copper paint, which I purchased from the crafts section at the local Walmart. The base is painted black.

Using a fairly dry brush, I start to add the color to the dragon. The first layer of green has been added in this picture. Some of the copper still shows through. (I could have stopped at this point – but I’m not too excited about the bright green as a color for a large, imposing and scary creature. I thought he (she?) needed some more work.) As I continue painting, I mix some of the green with silver paint, and I add some copper, black and silver spots along the dragon’s side. I paint the eyes last.

After all the painting was done, and all the paint was dried, I finished the sculpture with water-based Verathane mixed with a small amount of copper paint. This protects the sculpture, and the copper helped pull the colors together and made the skin patterns more subtle. The dragon is finished – now, on to my next project! (I still really like the way the painted finish came out. I do wish I had a closeup photo of the face, because the copper-colored eyes and the metalic shimmer over green really came out nice. )

Thanks for taking this little walk down memory lane with me. If there’s an old project that you’d like me to post, along with some suggestions for making it easier, please let me know.