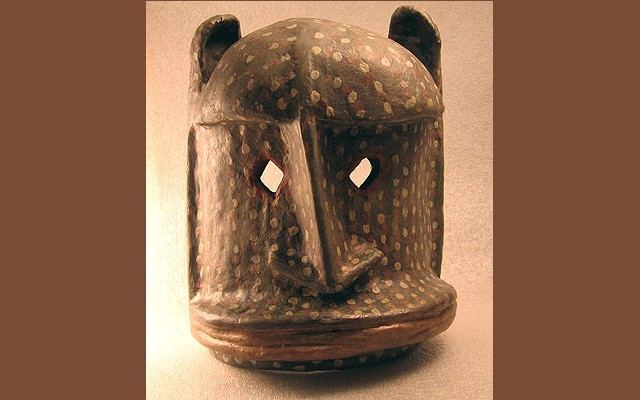 This paper mache mask is modeled after a one that was made by a Dogon artist. There are a number of websites that show these masks, because their beauty makes them valuable works of art. I found the hyena mask that I found here.  The process was challenging because I was attempting to copy an original piece of art made by a master craftsman, and that’s always a humbling experience.

I recently created another copy of an African mask, this time from the Ivory Coast. It was made by putting paper mache directly over a clay form, and the look is very different from this one. For even more posts about how to make a paper mache mask, click here.

For this Dogon mask, it wasn’t easy to fold and bend cardboard into a shape that resembled the original form. I normally use crumpled paper as the inside form for my paper mache sculptures, but in this case the mask is hollow, and needs to have strong walls. The cardboard gives the piece it’s strength without requiring many layers of paper mache, but a lot of cutting and bending and prodding were necessary to make it work.

The ears are each made from two pieces. The first piece is a long strip that is bent in two places to make a box-shaped piece, and this is taped to the sides of the mask. These pieces start at the top of the outer edges of the mouth and continue up about an inch above place where the curved dome is attached to the bottom tube.

The last piece of cardboard is taped above the hole that has now been cut out at the back. Before I added any paper mache, I spent some time poking and pushing and taping the top of the mask, so it would be as rounded as possible. I also spent some time shaping the ears so they would have fairly smooth forms.