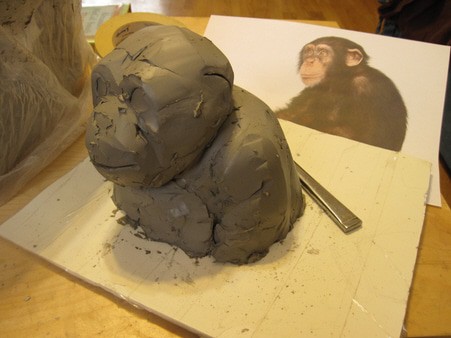 I seem to be in the mood for experiments this month. Most of my experiments have been out in the garden (no results to report yet), but yesterday it was cold and wet, so I decided to stay inside and do an experiment with paper mache clay. This experiment actually started a few weeks ago when I posted an article suggesting that very small children would have more fun with real clay (with paper mixed in) than with paper mache, simply because working with pottery-type clay is more intuitive. I pinched together a silly imitation toddler’s bear with some clay I had on hand, just to have a photo for the post.

That made me wonder if I could use paper mache clay over a pottery clay armature that could be made easier, faster, and more intuitively than the crumpled paper and masking tape forms we normally use. After all, why should little kids have all the fun? That pottery clay was sitting there, whispering “play with me, play with me…” How could I refuse?

So here’s what I did yesterday, with the help of some ordinary pottery clay and a helpful chimp. It’s an experiment, not a tutorial, but I’m sure you’ll immediately think of ways that you could use the same techniques in projects of your own. I was so happy with the results that I’ve already started a “real” sculpture, since the “experimental” sculpture worked so well from a technical standpoint.

For the first step I used pottery clay to form an armature for my chimp. I wasn’t paying much attention to proportions or anatomy at this point, because I just wanted to know if the process would work. Like any armature, it needed to be made slightly smaller than the finished work because the paper mache clay would be applied over it.

Next, I put a very thin plastic bag over the wet clay. I used the kind of bag you get in the grocery store’s produce department. The plastic stuck to the damp clay, so no tape or other fasteners were needed. I used the plastic so the clay would stay clean and I could use it for another project.I completely surrounded the clay, including the bottom, to keep it from drying out.

I applied the paper mache clay directly over the plastic. Since I knew I’d be removing the supporting armature, I applied the clay more thickly than usual – about 1/4 inch.

I used expanded aluminum gutter screening for the ears, and continued to build up the details with the paper mache clay.

I cheated a bit and dried the chimp in the oven, at 200 F. It has been cold and damp in my part of the country, and it would take ages for the thick paper mache clay to dry on it’s own. I do not advise drying the clay any hotter than that, because it will make your house smell like hot plastic.

When the paper mache clay was dry, I turned the piece over and removed the damp pottery clay and the plastic bag. If the clay on the inside dried out, it would be almost impossible to remove. You can see in the photo below that the walls of the bust are fairly thin, but it was quite strong. I continued to build up the paper mache clay over the first layer, to add details like eyes and lips.

Once the second layer, with the details, was dry, I could see the potential of this technique (see photo below). Of course, the experimental bust was never intended to be finished, but I have already started a new one, which you can see in the background. This time I’ll paying attention to things like anatomy, proportions and design. He should be dry and painted in a few days. I’ll show you how it turns out.

I think this method would also work with traditional paper strips and paste, although I’m too lazy to try it. If you do, or if you’re experimenting with any paper mache project this week, be sure to let us know.