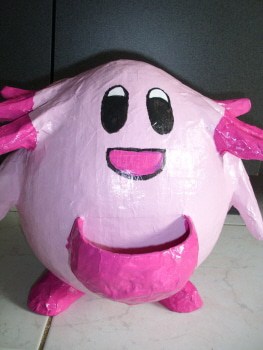 Jelina offered to write another guest post, this time showing us how she built a paper mache “Chansey.” And now – here’s Jelina:

I hope that everybody knows Chansey, itâ€™s a Pokemon thatâ€™s a kind of nurse with a little pocket on her belly where an egg fits in.

This is a picture of the real Chansey:

The idea to make a Chansey is not mine, itâ€™s my sister that also loves PokÃ©mon and she wanted a holder for a cellphone, so she asked me if I could make a Chansey, and het cellphone would fit in the pocket on the belly of the Chansey.

So I started by making an egg by blowing up a balloon, then I made the 2 arms with crumpled newspaper and taped them to the egg.

Then I made the feet, I made one ball of newspaper, and covered it with strips of newspaper. When it was totally dry I cut them in half so I had 2 feet.

As you see on the First picture, the chansey has a sort of hair (what else should I call it?)

That was the next thing I made. I made it with 6 pieces of cardboard, like you see on the next picture. And I filled it with little pieces of crumpled newspaper. Notice the little flaps on the left side, It makes it easier to attach it to the egg.

Here you see the tail. I rolled up a sheet of paper and taped it, and attached it in the right position to the back of the egg.

Then I covered it with white paper. I also pushed its arms a bit inside because they were to much sticking outwards. I think it really looks like the real Chansey.

Now I have to make the pocket and paint it.

Here you see the little pocket on her belly. It is made from a ball of newspaper.

Then I painted it, and now it looks like this: