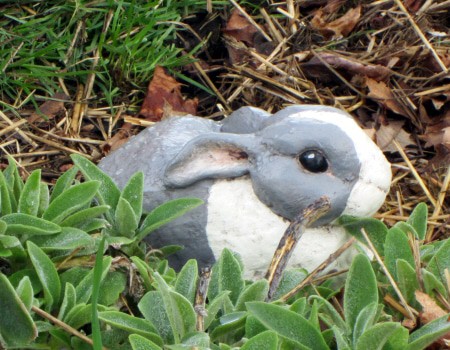 This week I’ve been doing more experiments, while also playing around with modeling clay portraits. The portraits were just for me, because I’m trying to learn how to do it. You can see a few (and also see what our fellow sculptors have been up to this week) on our Daily Sculptors page.

All of my experiments have involved the same little bunny – the one shown here. I wanted to find out:

We won’t know how well the varnish works until the bunny has been outside for a few months, but the foam portion of the experiment went well. Here’s what I did:

I made the little bunny with modeling clay, and then created the silicone mold and a plaster of Paris support mold, shown below. I had a piece of corrugated plastic left over from building my greenhouse window last year, so I used it for the base of the mold. I used hot glue to attach the base to the silicone mold, and then clamped them all together, just to make there wasÂ  a tight seal.

Two part flexible foam was mixed up and poured into the mold, and allowed to set. It was ready to come out of the mold in about 30 minutes.

For the bunny shown here, I covered the foam bunny with one layer of fast-setting paper mache paste and blue Scott shop towels. I did not use a release, so the paper mache stuck fast to the foam. The recipe and method of using the paste and shop towels are in the videos about how to make a Pantalone mask. It would have been better to add two layers of paper mache, but I only used one.

The bunny was painted when the paper mache was dry, and this morning I coated it with a solvent-based acrylic varnish with anti-UV properties. The varnish is supposed to be waterproof, and itâ€™s intended for outside use. Itâ€™s made by Pebeo. Iâ€™m sure there are other UV-absorber varnishes out there that would also work.

Some people use spar varnish over the final layer of paint, but when I tried that the sun cracked the varnish and it all chipped off. Rich uses spar varnish under the paint, right on top of the paper mache. He then paints, and then uses deck sealer over the paint. (I hope he’ll correct me if I got this wrong.) He says he’s had really good luck with this system of waterproofing paper mache. But, just to be a contrarian, I wanted to see if this anti-UV varnish could be used effectively after the paper mache is painted, without any other form of protection. We shall see.

I’ll stick him out under the lilac bush when the varnish is dry. Wish him luck – he may need it. 🙂

I’m happy with the way the paper mache covered the foam. I didn’t actually design the original clay model with this in mind, so the details were not exaggerated the way they should have been if I were thinking ahead. (That’s why I only used one layer of paper mache.)

However, since the foam was flexible, it was possible to press the pasted shop towels deep into the lines around the eyes and toes, so he still looks very close to the original. I think it’s possible that I could have used the second layer of paper mache without losing all the detail.

I don’t think this system would be terribly useful for most people, but I think if someone sold paper mache items and had one particular design that needed to be made over and over again, having the foam core ready-made could be a real time-saver. But the piece would need to sell for a price that covered the extra expense of the silicone mold and the foam.

I can also see this being used to make just one copy of a modeling clay sculpture with paper mache, if the piece was “important” enough. The molds and foam are expensive, but not as expensive as bronze, by any means. (I may actually try that, if I ever make a figure sculpture worth saving for posterity.)

Now – for the final question: Can you use flexible foam for a re-usable mask form? To find out, I used a release on another foam bunny, and covered it with paper mache. When the paper mache was hard, I carefully pulled the foam out. It worked, even though there are deep undercuts around the ears and under the chin.

This is also something that wouldn’t be terribly useful for most artists. However, I can imagine a theater prop-maker needing masks for an entire Greek chorus, and needing all of them to be the same. Other mold methods would usually work just fine, but if there are deep undercuts and the mask-maker doesn’t want to use multi-part molds, this method would work rather well. Or if you need several elephants or masks with large antlers, you could combine both ideas – leave the foam inside the horns or trunk, while removing the foam from the face area.

I ended up with more bunnies than any one person needs, but I learned a few things and I had fun with it, even though I’m not quite sure how I’ll ever use what I learned. Someday, though, I’ll bet this will come in handy…

17 thoughts on “Paper Mache Bunny – 3 Experiments in One”