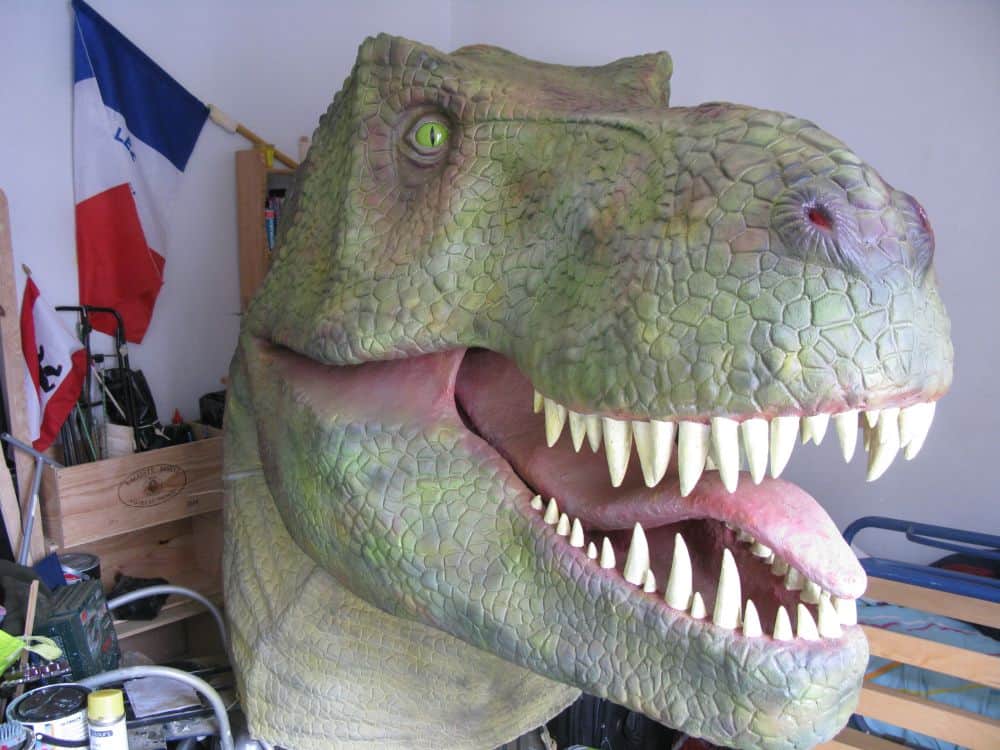 We have a real treat today. Nick Allen, who joined us in the past to show off his two museum-quality T-Rex sculptures (see posts here and here), is back with more great dinosaurs. He also tells us about his new studio and his new method of copying dinosaur skins, and he hints about his “other” life, when he’s not in his studio. (I suspect that his adventures are considerably more interesting than than mine. 🙂 )

© Nick Allen, 2014 —  Happy New Year modellers around the world. I have popped up once more on the website to show a couple of new(ish) models I have been working on since I last posted in April 2012.

My, what a lot of water under the proverbial bridge. At that time I was building in my little Paris bedsit, mainly Georges the T-Rex (shown above) who then found a home in Le Musee des Dinosaures in southern France. I decided to do ‘one for the road’ before I left France, so set myself the challenge of building another head, of a horned ‘styracosaurus’ in the fastest time possible, to donate to the same museum on the occasion of their 20th anniversary. Alas, I didn’t manage in time, largely due to my prolonged detention and subsequent deportation to Tajikistan by Russia over a rather pesky visa issue. But that’s another story.

So Myrtle the styracosaurus was eventually driven to Esperaza from Paris by the director of the museum, crammed into the back of his Renault Clio. She survived the journey fine, but as a reminder to always expect cussedness to test our mettle in our ventures, then fell off a table in the museum that night, breaking several horns. Fortunately they repaired the damage and Myrtle now stands beside the main door (pics 2 and 2a).

I then loaded my gear, tools and the original styracosaurus mold into a van and drove 1,000km overnight to Berlin. After the trials of building a large model (T. Rex head) in a tiny space, I finally spread my modelling wings and rented a good-sized workshop. I bought a small welding unit, built a steel frame and my first full-scale prototype, a 20-ft carnotaurus. The technique was much like before, cardboard armature strengthened with bits of street junk, fastened with plastic cable ties, shaped with newspaper and tape, and then covered with a version of Jonni’s air-dried clay. Berlin is an hour from Poland, where I make trips with a rucksack and trolley, buy the materials at half the price than in Germany, and enjoy a day out in another country.

This current model is a much longer project, not just because of the dimensions but also because of the experimentation. The workshop actually now holds three full-sized dinosaur forms because I have worked on the technique of taking ‘skins’ off the basic mold, so I can in future duplicate without having to build completely anew. I made an entire second skin on the first model (which was waxed to allow removal), prised it off and hung it on a wooden scaffolding for expansion into a second mold. From this I took a further skin and that is what you see in the photo (Pic3).

It’s a crude form still, but finally possesses the proportions and general lifelike dynamic needed for a display model. So far this three-stage process has taken 16 months because I have been busy elsewhere earning a living, and grab time in the workshop where possible. But the joy of finally having a decent sized work space never seems to wear off. That said, I’m going to have to shift some of these beasties now as it’s getting a bit tight in there again.. (Pic 4)

I am now fastening and sealing together this third ‘skin’ in Pic 3, maybe a bit prematurely as it should have first been fitted on a properly welded steel frame, using better welding gear than I have. I found a professional metal worker hidden away on my street but after a couple of months of trying to get him to visit a second time to discuss the task (a one-minute walk from his premises) I decided to do it myself or at least find another welder to help. So I’ll keep working on this model for now and will probably have to slice open its underside in order to raise and lower it onto the metal frame when built, and then reconnect it again. The head and tail are detachable though, making life easier during building and eventual transportation. Then comes the most satisfying stage, adding the detail, muscles, folds of skin, rendering the scales, setting the glass eyes, of which I now have a good stock tucked away. Then I’ll build a rock-like plinth and spray it to finish.

This will be my fourth completed large-scale model, or sixth if you count the other two that I used as a mould to take this skin. It might seem a very laborious and expensive pastime, and that’s what it is so far, although I am now having a website built in order to do this more professionally. I never set out to learn this specifically to make money, although workshop rent, material costs and general enlargement plans pretty much demand this now.

I remember once hearing that there is no surer way of spoiling a hobby than making a business of it, but well, evolution can be pretty brutal, just ask carnotaurus et al. That said, I don’t think I will tire of creating new models or of paleontology itself, and my fascination for the sheer vastness of the geological time frame that every living creature on earth is part of.  On top of everything else, I find it great therapy for the stresses of work, and having worked in some rough places over the years, there have been many. I don’t know what else 2014 holds, but more models for sure, so I shall stop by this wonderful forum and post again.

Wishing you all a great year, and good luck with all of your creative projects.