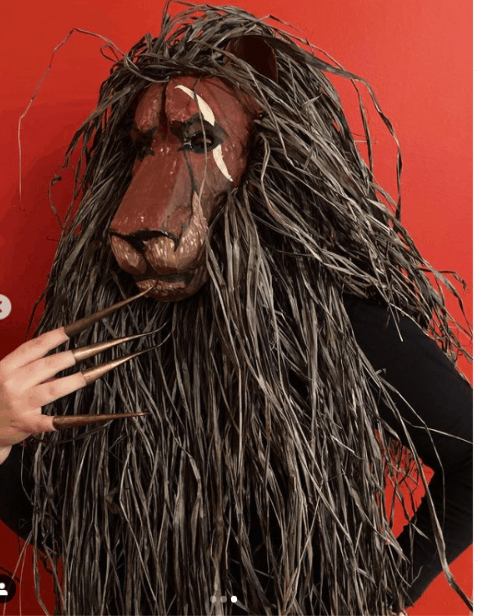 Made by Mary Kay McBrayer

Hi, Jonni! I used your Lion pattern to make Scar and Mufasa masks for Halloween, and I’m so thrilled with the results that I wanted to share them with you here.

I printed on regular paper, cut it out, then modpodged it onto junkmail cardstock I had saved up (I was getting a thousand mailers a day pre-election, so I just used those), and then cut it out again. I followed your steps to bring the masks shapes into wearable forms.

I only used one layer of actual paper mache because I didn’t budget my time very well, and you know how long it takes that stuff to dry, but in retrospect I’m kind of glad I did only one, because that made the masks a little more flexible, so they were more comfortable to wear, and not that heavy. (We also wore cloth masks underneath when we were around people, so that added a layer of cushion.) For the adhesive, I used flour and water strips of paper per your advice. If I had to do it again, I would have used newspaper rather than thicker printer paper because I think the edges would have been less visible.

While they dried, I did a kind of head-molding thing, too, so Scar’s face would be narrower and Mufasa’s wider… it was really just how they rested on the table. I think I was able to do that because they were kind of soggy. That was not intentional, just how it turned out because of the materials I chose.

Once they were dry, though, I did take a low-grain sandpaper to it to buff a little, and I used a disposable emory board around the eye holes so they weren’t so scratchy.

After that, I your YouTube tutorial and went over the whole creation with a mixture of drywall (which I bought in the hardware section) and Elmer’s glue. That also smoothed out the edges A LOT, and I’m so glad I took that step.

While that dried, I dyed the masks. I used the raffia tableskirt that you recommended and RIT fabric dye… maroon for Mufasa and black for Scar. In retrospect, I might have soaked them longer or double-dyed for richer colors, but I kind of liked the rustic look. I had also planned to give them haircuts, but when the manes were so long, we didn’t really have to wear a “rest of the” costume,  just wear the right colors. HOWEVER, if I had to do it again, I would have saved a little lock of mane for a tail-bush. I had a cool idea of making a long tail with fabric, safety-pinning it to our tailbones, and attaching fishing line from the end of it to our wrists like a bridal train/puppet, but I ran out of time.

I think they really started to take more personality when I painted them. I just used regular acrylic paints and brushes with a photo of each cartoon for reference. I also used your tutorials on how to make the “fur” more three dimensional, like by using tints and shades of the same hue for depth. Even though I used the same pattern for both masks, the painting is where they really started to stand apart from one another. I did some ye-old-makeup techniques like overdrawing lips and eyes to distinguish between the characters. (Mufasa has a winder snout, and Scar is more sulky-frowny, for example.)

After THAT dried, I glued on the manes with hot glue by following another of your tutorials for the backward, wig-tracks style so the seams wouldn’t show, and then kind of made it my own. For example, Mufasa’s mane is kind of blown-back and bushed out on the sides, but Scar has more of a metro, side-parted widow’s peak forelock, so I imitated the cartoons’ hairlines and patterns.

After Halloween, I just hammered a nail through the back of the piece that made them wearable, and now they’re hanging in the background of every Zoom call… I mean, I couldn’t just let all that work go to waste, you know!?

I wanted to say thanks for your expertise–without you, this would have been a hot mess, but now I feel like I won Halloween.

2 thoughts on “Mufasa and Scar Halloween masks, from your Lion pattern”