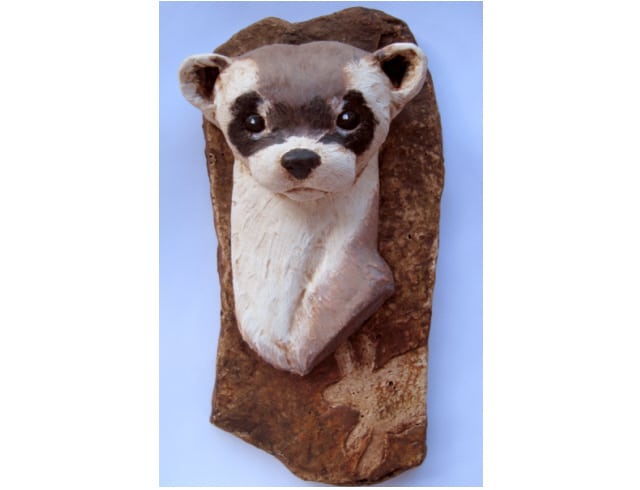 I’ve been working like crazy all week, but I don’t have much progress to show for it. I’m still trying to find a formula for the paper mache clay that will work well in a rubber mold. So far I’ve completed one black-footed ferret, with a plaque based on an ancient petroglyph at Wyoming’s historic Legend Rock. (Thanks to everyone who offered suggestions about the plaque at the end of the post about making the rubber mold. I didn’t follow your ideas exactly, but the feedback helped point me in the right direction.)

I chose the carving from that location because the last wild population of black-footed ferrets in the US was found in that state. I’m hoping that the rough “rock” behind the ferret will somewhat mitigate the critter’s excessive cuteness. He looks so innocent, doesn’t he? (False advertising for a highly effective carnivore, but we do seem to be genetically drawn to that high forehead, big button eyes. We can’t help it.)

The walrus is almost done, but I haven’t finished sculpting his background rock.  I did find ancient petroglyphs from Siberia near the habitat of the walrus, though, and I’ll be finishing the mold for the plaque today. And I found an Arabian oryx that was carved on a rock wall in Saudi Arabia, so the other two critters should be done soon. I really thought I’d be whipping out these portraits quickly – at least one a day – but all the experimentation (and messing around in general) has really slowed me down. I want to do a timber wolf and a big-horned sheep next. One thing I’ve discovered is that I really enjoy doing the head sculptures more than I enjoy making the full critter, complete with legs and tail, etc. Since I’m having fun with it, that’s probably what I’ll be doing for a while.

Tell me what you think of the “rock” background. Does it work?

OK, back to the experiments. I will figure out how to make the paper mache clay work in a mold the same way every time – but I’m not there yet. Back to the drawing board.