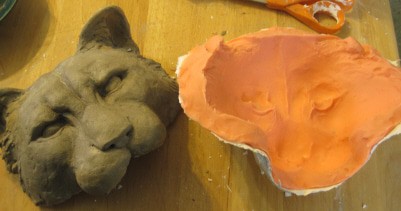 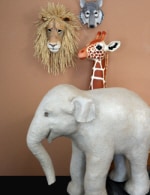 Note: If you’d like a faster way to create an animal wall sculpture, check out my patterns. Cut, tape, and cover with paper mache. You can find all my patterns by clicking here.

I’m writing this right before Christmas, and this is the time of year when I get the “what would happen if?” urges. That’s why I’ve been testing various minor additions and changes to the original paper mache clay recipe, hoping to find one that will work well in a mold. I previously tried using the original recipe in molds, and I couldn’t get a predictable result. So – back to the drawing board.

After getting every bowl in the house dirty, and filling my garbage bin with rejects, I think I have now found a recipe that will work better in molds.Â  I’ll post the recipe when I know for sure.

To test the new recipe, I made two molds using Rebound 25. Last summer I made molds using urethane rubber, which is messy – I was hoping that the silicone would be more fun to use, and so far I’m quite happy with it.

I built two models using water-based clay. The wolf and cougar were allowed to dry, and then I prepared them for the mold silicone by sealing them with a product called SuperSeal that I purchased from Farwest Materials in Walla Walla.

You can see that I designed the shape of the wolf wall hanging so that I could easily reach all parts of the mold from the other side. The paper mache clay will need to be pressed in by hand, and a lot of pressure will be needed to get all the details. The sealer prevents the silicone mold material from entering the dry clay, which would ruin the mold.

The next step was to mix up the Rebound 25, a silicone product that is mixed 1 to 1 by volume. I should also have purchased some Thi Vex, a product that will thicken the silicone for the second and third coats, but the supplier had run out temporarily. I hoped that I could make do without it. This was a mistake, because the liquid rubber flows off of any high spots, leaving them very thin, regardless of how many coats are added. The rubber over the wolf’s eyelashes are very thin, and the thickener would have prevented that. Oh well – live and learn…

The starter kit, shown above, was enough for both the wolf and the cougar, with about 1/3 left over for another project.

You can see how thin the rubber is when you paint it on the model. This is perfect for the first coat, because it catches every detail. For later coats, it really should be thickened with the Thi Vex stuff.

The mold rubber dries for about 1 hour between coats. You can see in the photo above how it tends to drip and move to lower spots when the thickener isn’t used. The photo above shows the wolf after 4 coats have been added, and it’s now curing. I allowed it to cure overnight.

When the silicone has cured it’s time to make the mother mold. I wanted a mother mold that’s lighter than poured plaster, because I’ll probably be holding the mold in my lap while I press the paper mache clay into it. I decided to try using the plaster-impregnated gauze, which I have never tried before. This is how wolf looks after several layers of bandage have been added, with extra gauze put on around the edges and over the ears. I let it dry for several hours while I made a run to the store to stock up on dog food.

I made the mold for the cougar at the same time as the wolf, and both of them came out quite nice. No air holes or defects in the surface, and they caught all the detail. The Rebound 25 makes much less mess than the urethane molds I made last summer, which is something that matters when you’re doing it in your kitchen.

The molds are not cheap, unfortunately. I estimate that the wolf and the cougar molds, including the mother molds, the silicone and the SuperSeal, cost about $15 each. They’re about 9 inches wide. Of course the water-based clay was sealed so it can’t be used again, and the oil-based clay I used to create the edges of the molds now has bits of plaster in it. I suppose these materials should also be added into the cost.

I’ll now see if the new paper mache clay mixture will work in the molds. If I get a good result I’ll let you see them (and maybe the hippo that is still waiting for her mold), but it probably won’t be until after the New Year. Until then, I hope you have a fantastic holiday, and that you’ve thought up some fun and interesting new paper mache projects to show us!