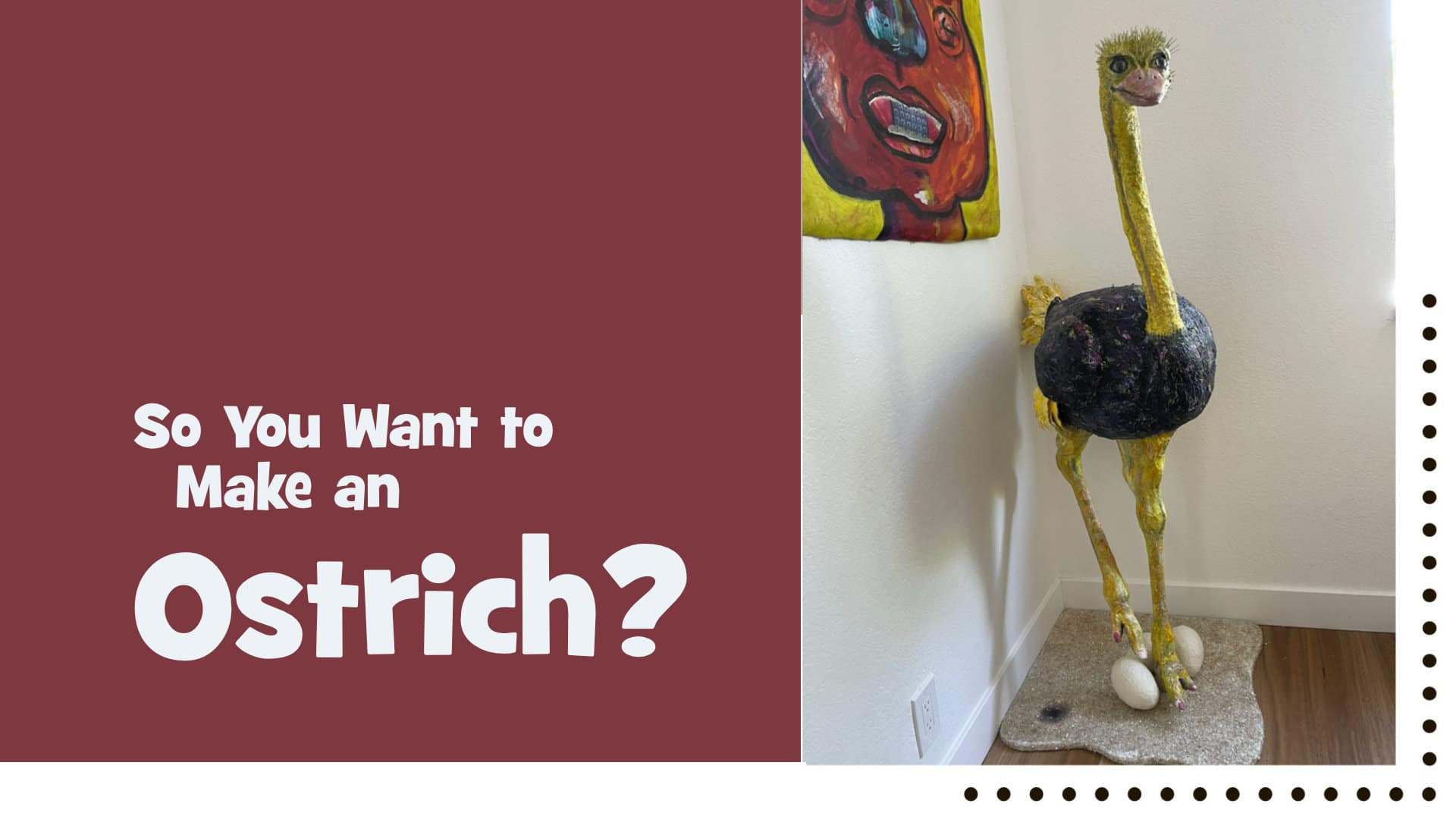 Full disclosure, I’ve only made a few sculptures, and none have been tested for structural integrity, but so far there are no missing appendages, other than the toes my dog keeps chomping. 🙂

I started with a sketch to figure out the support, in part because I was recovering from a broken wrist and could only use one hand (see figure 1 below).

I might do it differently at this point as I didn’t love the way the base turned out with the ostrich setting above it by about 2”. In the final photo you’ll see I resorted to covering it up with eggs. But this is how I proceeded.

The base is a square of plywood, roughly 24’ square, with a ¾” metal flange screwed on to it. While I originally centered the flange, I ended up moving it towards one corner, so my ostrich would fit in a corner. Glue and screw a pvc male coupler into the flange using Red Hot Blue Glue for PVC pipe or a similar glue. Be careful not to strip the plastic, then insert a piece of pvc pipe that is roughly as tall as you want the top of the back of your ostrich to be (see figure 2). I used ¾” pipe.

This piece of pipe will become the weight-bearing leg. I opted for NOT gluing the top of the coupler, only the threaded part, which turned out to be really helpful as I could rotate the sculpture by turning the pipe.

On the top, you’ll need a second male coupler and flange that is attached to the underside of a smaller piece of plywood, mine was roughly 6” x 9”, that will fit inside the ostrich’s body (see figure 3).

The body will hang from this, and the neck might be attached to it if need be. (Obviously, this is a different approach to Jonni’s cardboard armature which could also work, though attaching the neck will need some thought if using cardboard.)

Using chicken wire, shape an oval the size you want the body to be leaving the bottom open, so you can slide it over the smaller piece of plywood. Chicken wire will be “stiff” in one direction, but you can make it bend by making small crimps with needle nose pliers (see fig 4). 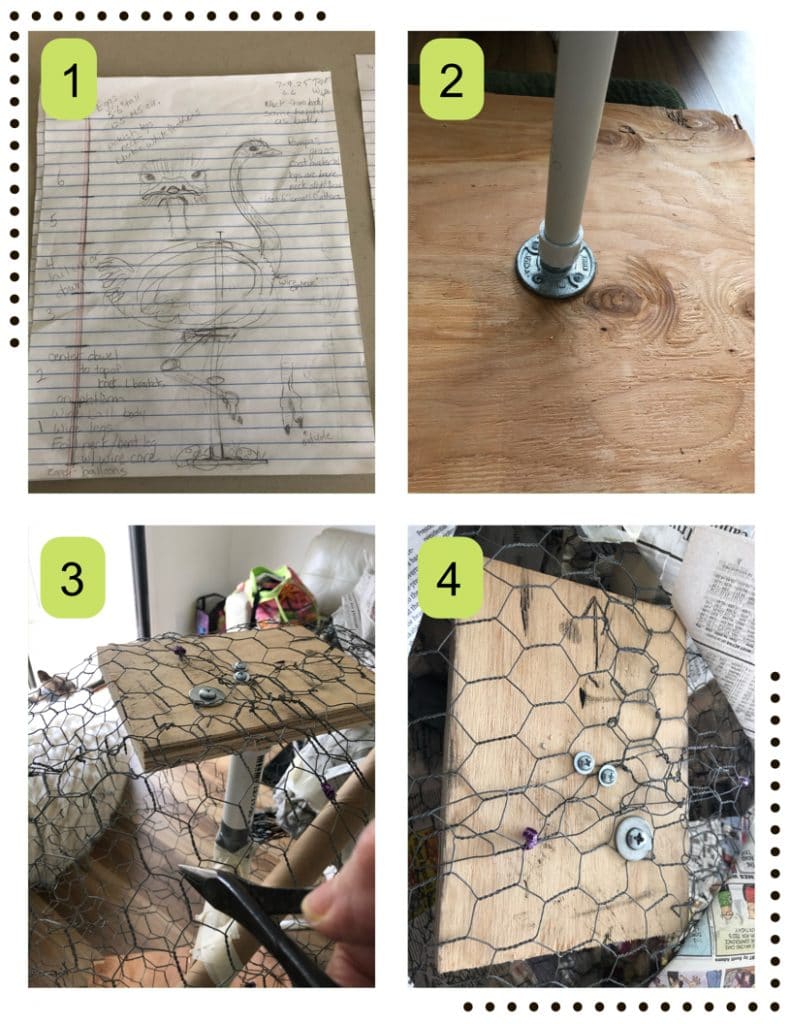 You’ll want the body cage offset to one side, so the weight-bearing leg doesn’t come out of the middle of the body, something I learned by trial and error. Attach the cage to the smaller piece of plywood by either heavy duty staples or screws with washers that are large enough to not go through the holes in the wire (see figure 5, ugly, I know).

For the second leg, I used wrapping paper rolls. At the knee, I cut a hole the size of the roll in one roll leaving about a ½” at the end, inserted the second roll, pierced holes with an awl or ice pick, and wired them together. I then covered the “joint” with lots of tape (see fig  6).

I attached the upper part of the leg inside the body using the same wire/tape technique . I also put a toilet paper core between the two legs to keep the bent leg in place (see figure 7).

For the neck, I used what I think of as baling wire. You can buy it at Home Depot for cheap (maybe $5 for a big roll, shown in figure 8). I think it’s used to wire rebar together in concrete work. It’s more flexible than a metal hanger but similar in diameter. 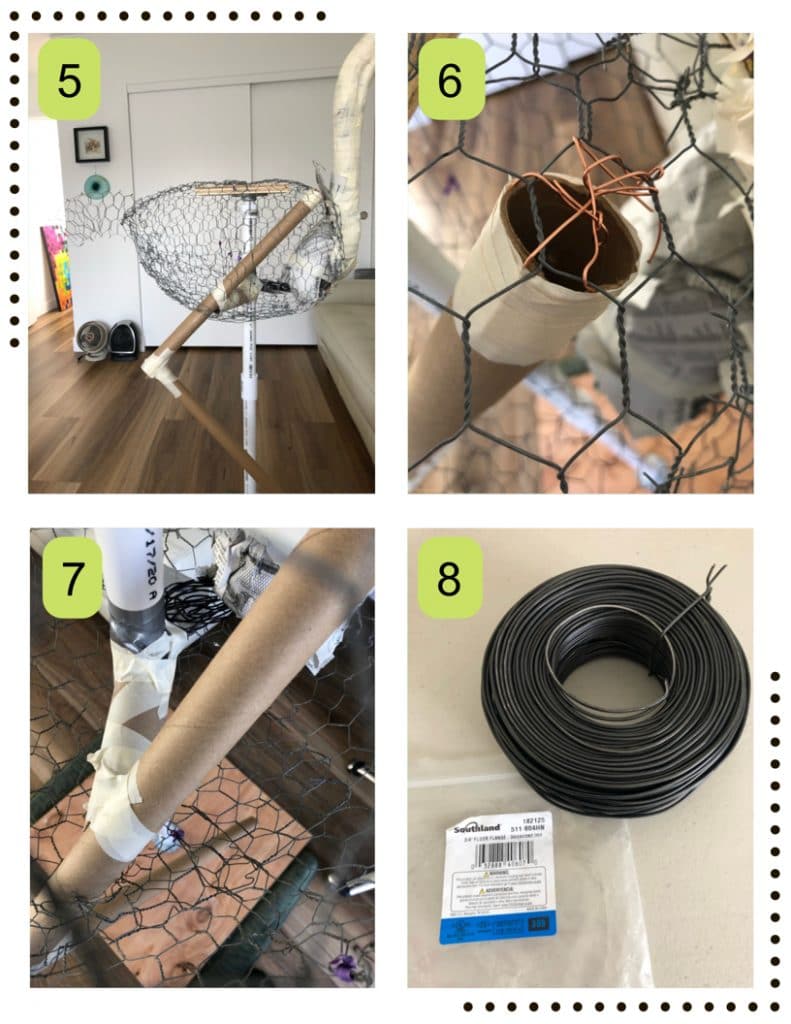 I guessed how long I wanted the head and neck, and I added about 12”, so I would have enough extra to enter the body and attach to the weight bearing leg. This is a critical connection to support the long neck.

With my length determined, (don’t worry about having too much), I started looping the wire back and forth until I had enough to support the neck. I’d guess I had 6-8 lengths though they were NOT cut, just bent at the end of each pass. I then twisted them around each other, so I wound up with a thick sturdy core. Shape this to your liking, push the excess into the body, shape the extra length into a random shape to brace off of that main leg (see fig 9).

I actually added my newspaper and masking tape before attaching the neck to the body. I also had to wire the neck externally to the “chest” area of the body to keep it from falling forward; it’s a balancing act for sure. I used a small piece of chicken wire to form the base of the tail. (see fig 10).

Now it’s time for foil, newspaper and masking tape (see figure 11). This is how I built out the joints and added volume and shape. I had to add portions as I went as “something was just off.”

I decided to use plaster wrap to make tail (see fig 12 ) and wing feathers (see fig 13) which was tons of fun. 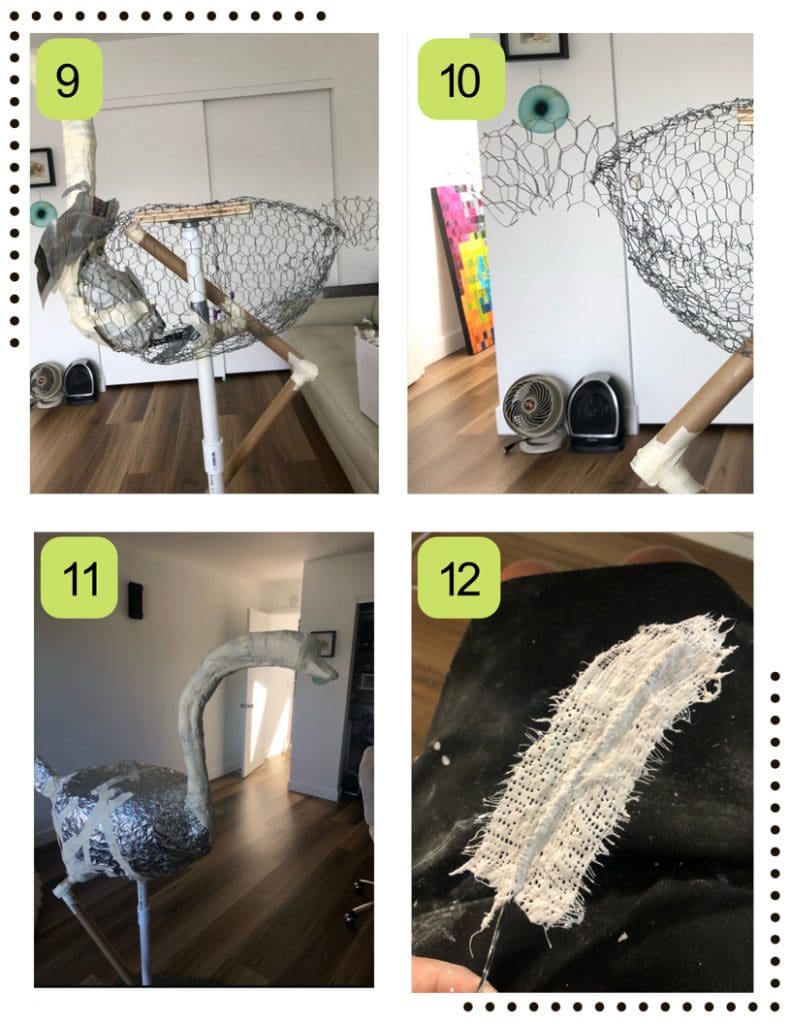 I made resin eyes which was my favorite part to do. For tendons, I twisted newspaper into tight lengths. I mostly used Jonni’s standard clay recipe, though I used her silky-smooth recipe for the beak. I found her paper towel technique perfect for the weird skin on the legs.

For some reason on most of my sculptures, once I put clay on everything, I seem to need to go back and make changes. The ostrich proved no exception. I ended up adding to his rear (fig 14, and later decided he also needed wings (see fig 15.)

I put dry oasis, foam from the floral section, in his wings and tail, so I could insert feathers. Once the clay had dried I also decided he needed hair; this would have been much easier to insert when the clay was wet, but live and learn. I drilled holes in the head and glued in “hairs,” using the bristles from an old scrub brush. 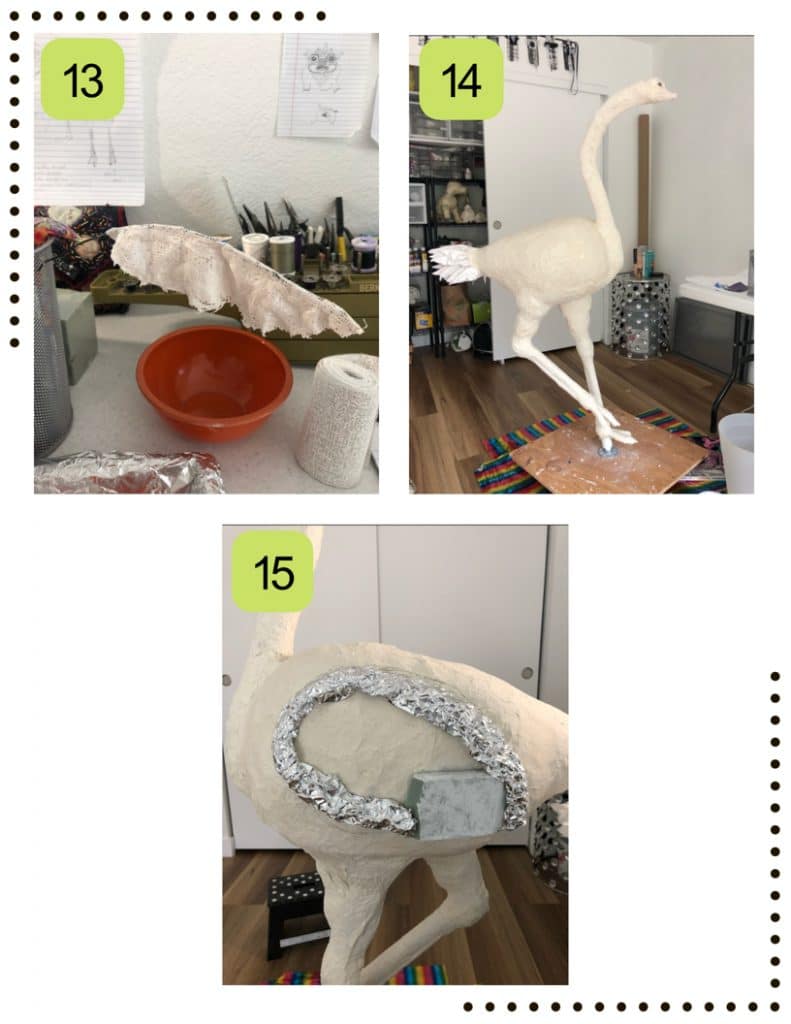 Perhaps my least favorite part is finishing which means painting. But here is the final, rather colorful, result…. 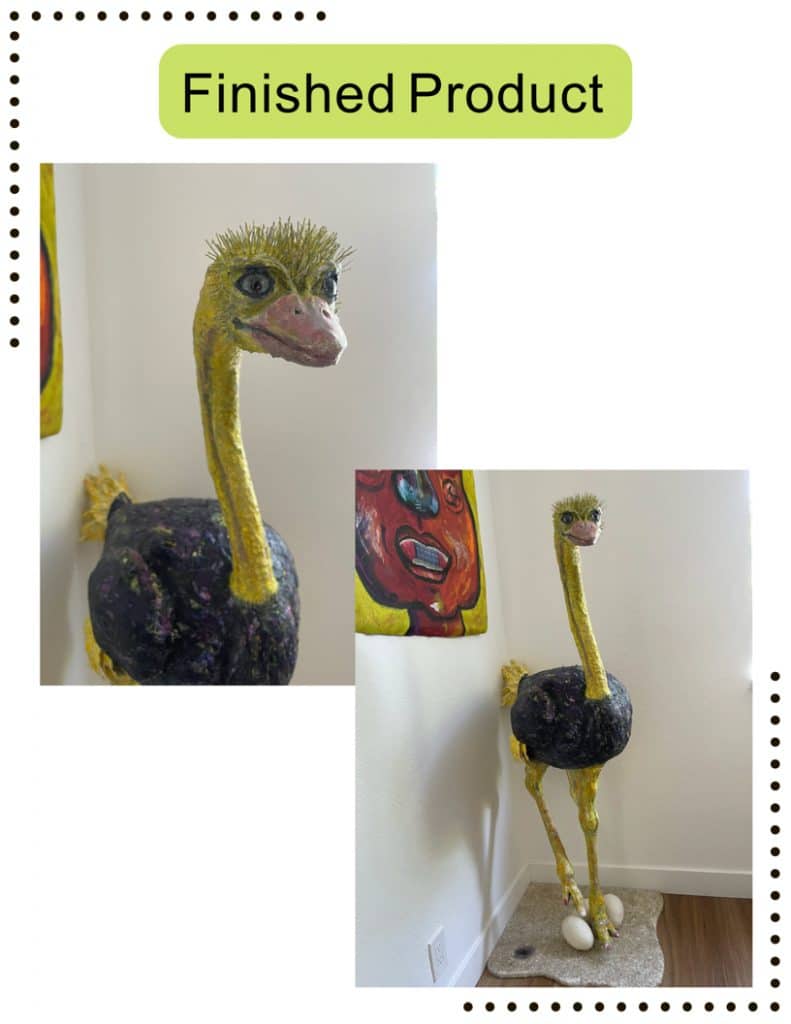 17 thoughts on “So You Want to Make an Ostrich? Pam Jurach Shows Us How”