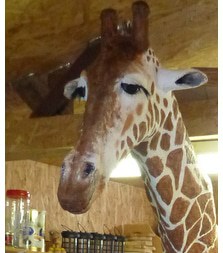 68 thoughts on “How Michele Made Her Paper Mache Giraffe”