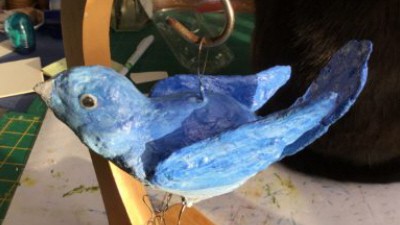 Our friend and artist Drusilla Cole wrote this guest post for us so we can make a bluebird like hers.

She included easy step-by-step instructions for creating the hanging bluebird with paper mache clay, plus 15 photos.

This would make a wonderful gift for a special friend. If we hurry we have just enough time to make one before Christmas.

If you do make one, be sure to come back to this page and show it off so Dru can see how it came out. And be sure to visit her website to see her beautiful original prints. (I’m totally in love with Dobbin!)

All my life I’ve made things and sold them or taught folks how to make them. Paper Mache has been a favourite art form that I’ve returned to recently – after chancing upon Jonni Good’s excellent website and being inspired by her methods.

This is how I made a Paper Mache Bluebird.

I wanted to make a hollow shell for the body of the bird and had the idea of using a Kinder egg. So I bought one, opened it, threw away the contents and trimmed the raised edge of the egg shape with a pair of sharp scissors. 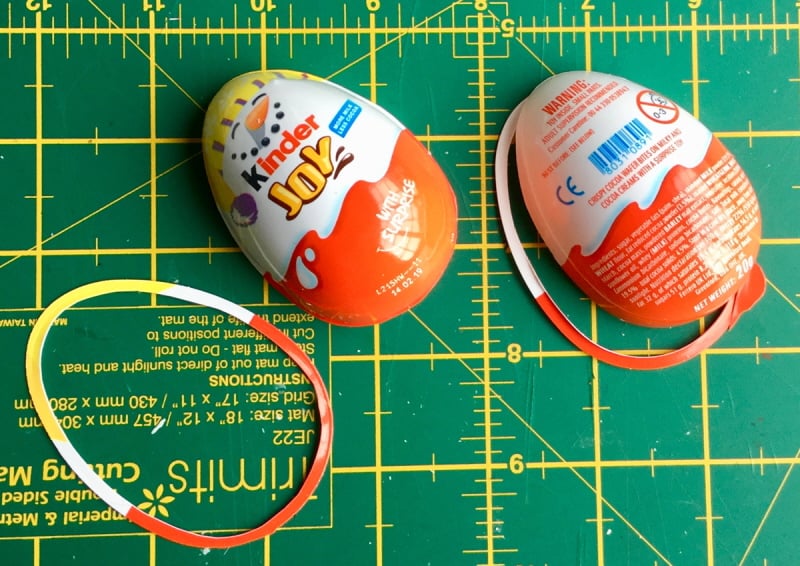 Next I placed one empty egg half onto a piece of newspaper and cut out a matching shape about 5cm /2″ bigger all round. I removed the egg then cut into the paper shape as if slicing into a pie, without going through the centre. 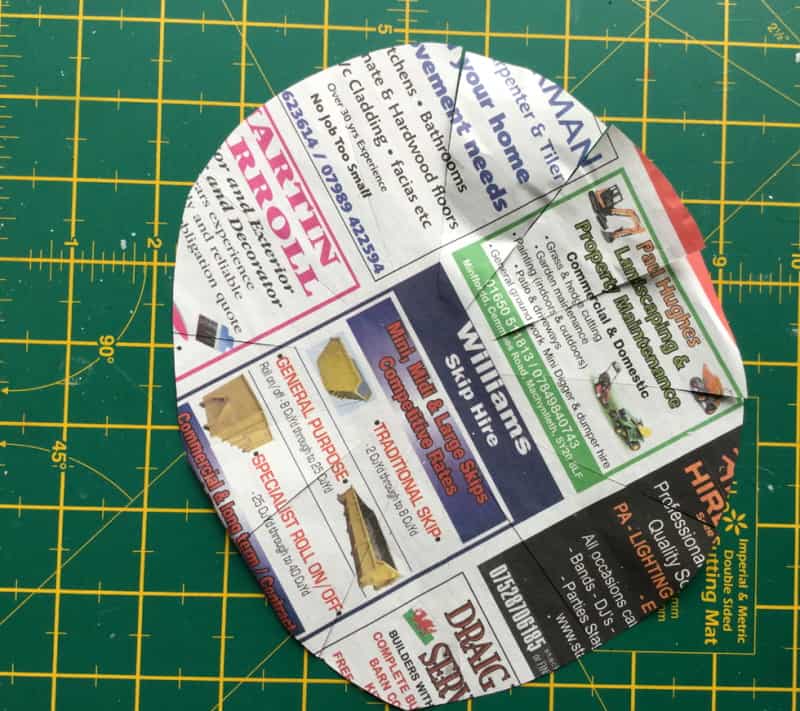 Then I placed an egg half, with its open side upwards, onto the sliced paper and then wrapped each slice in turn into the inside of the egg, securing it with masking tape, afterwards covering any gaps on the outside surface with more tape. 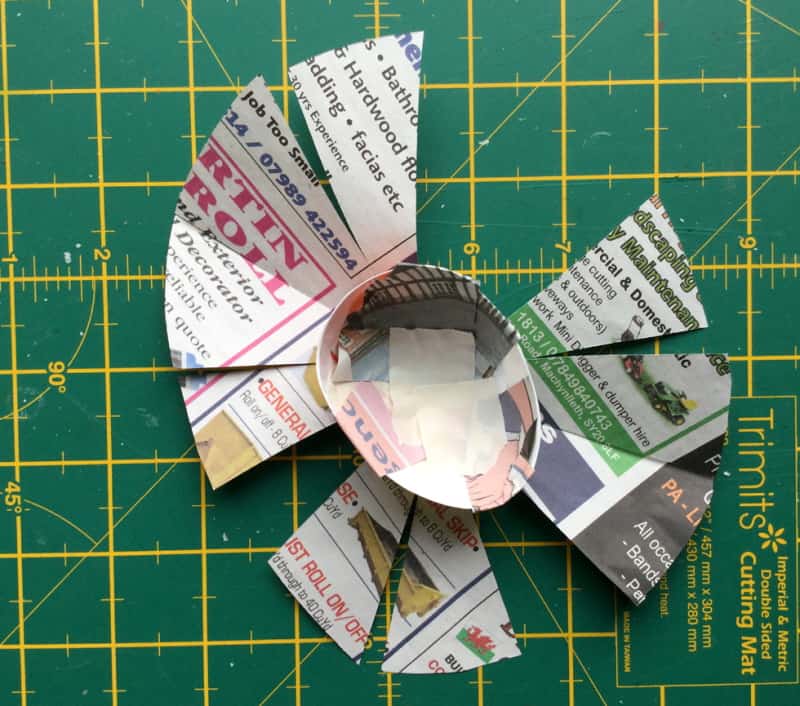 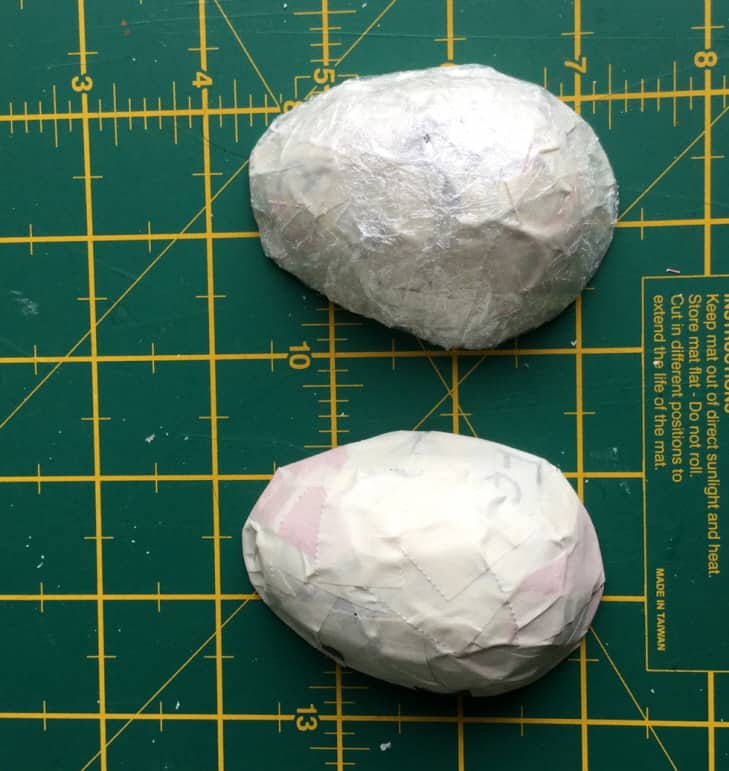 I repeated the process for the other egg half, then using a flour, water and PVA paste I covered the shapes with thin paper mache strips for about 3 layers and left them to dry. 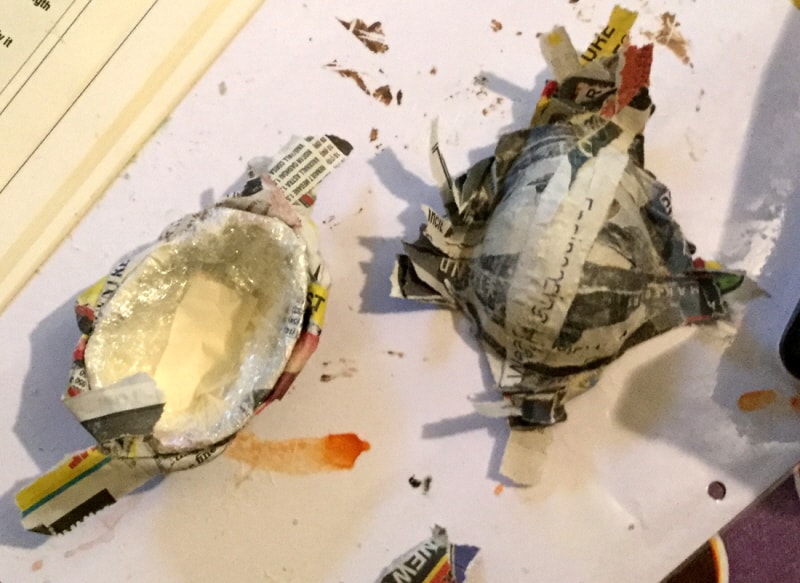 When they were dry I removed the paper mache shapes from the Kinder eggs and trimmed and tidied their raw edges. (The egg forms can be used over again) 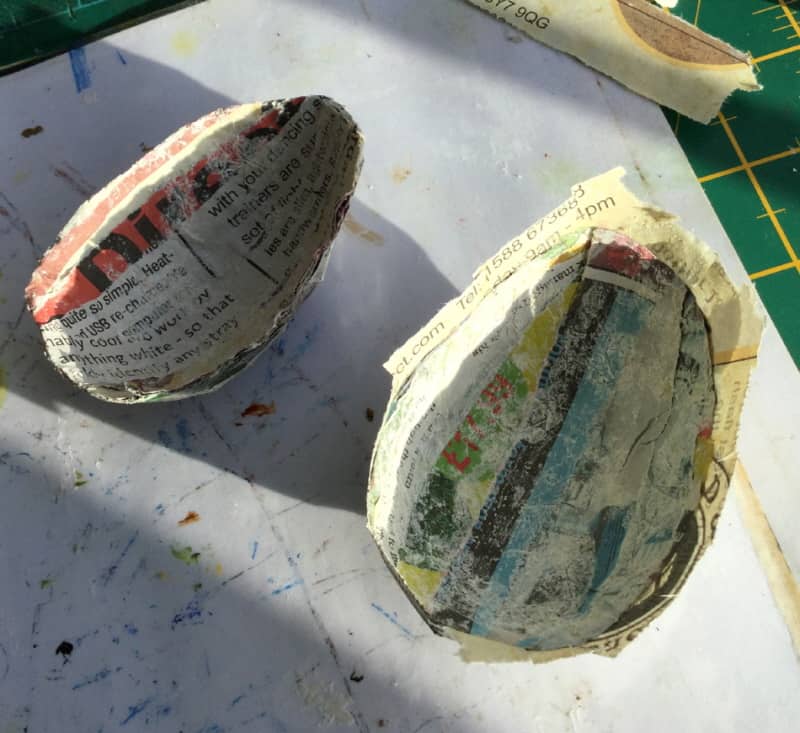 To make some legs I used a couple of thin 20 cm / 8″ floristry wires and by bending the wire in half I made toe shapes which were then twisted together to make a leg. 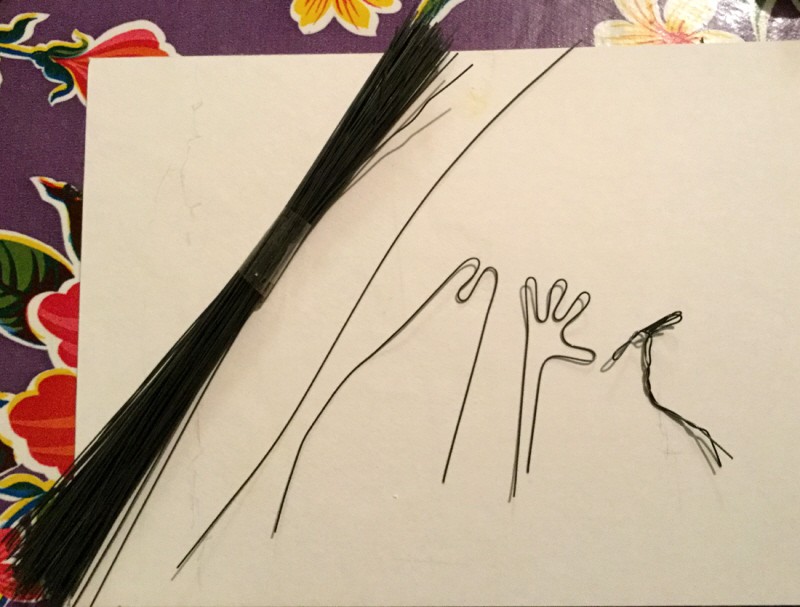 I made two legs with a bend in them. 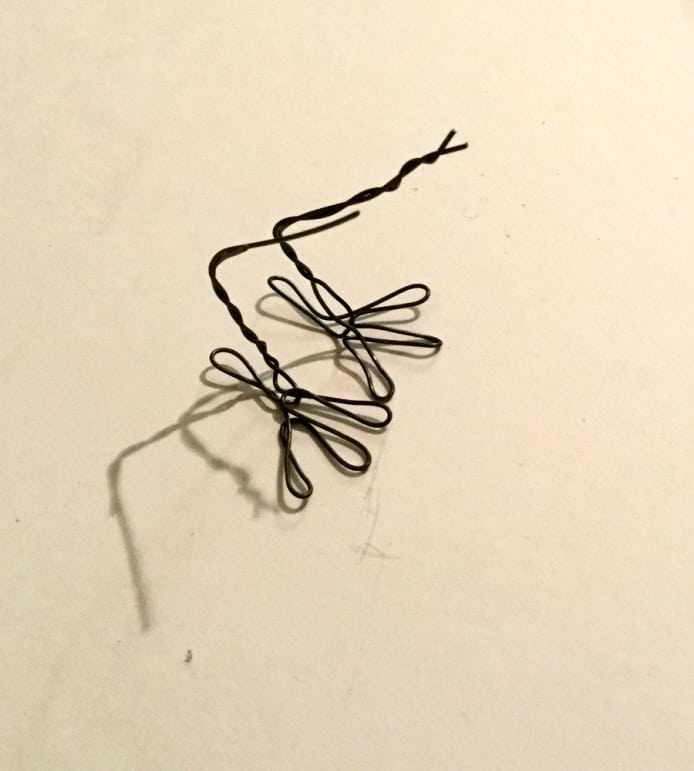 Next I poked small holes in one of the egg halves where I thought the legs should go, pushed them through and secured the legs with masking tape and a blob of super glue. I found the super glue helpful as the legs were a bit wobbly without it. 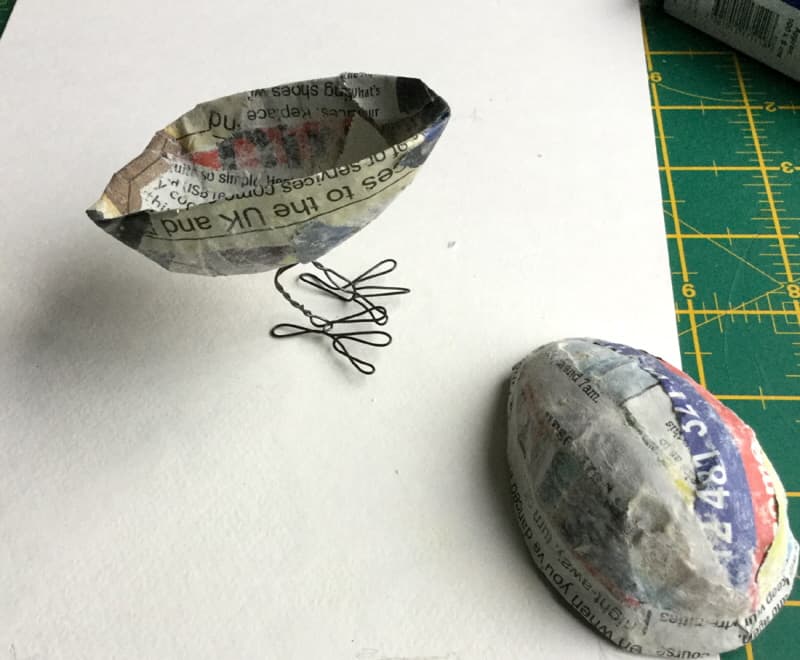 Next I made a head shape with rolled up newspaper and masking tape and pierced it with a cocktail stick. I poked a hole in the body, pushed the stick through and secured it with tape. 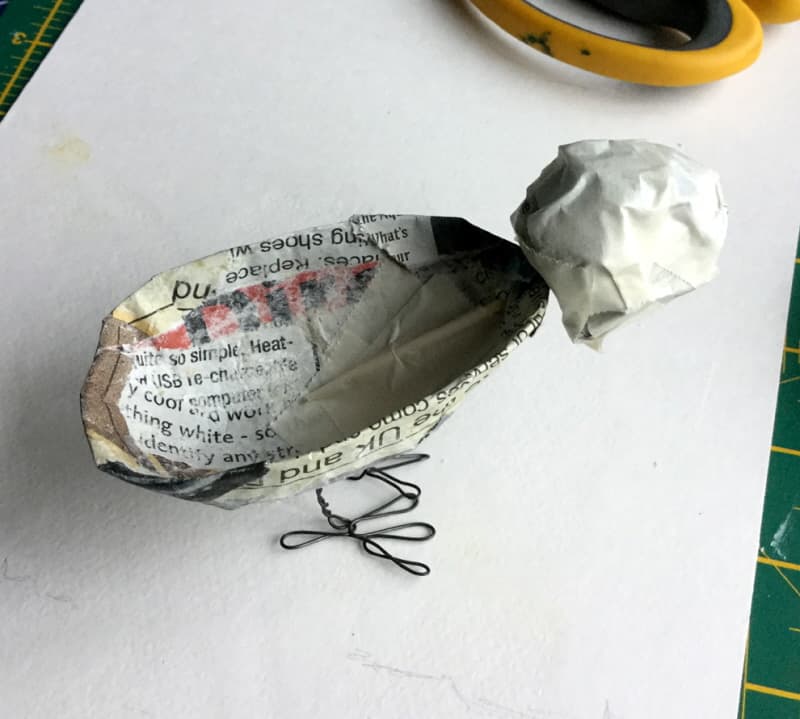 Then I cut some shapes for wings and a tail out of thin card. 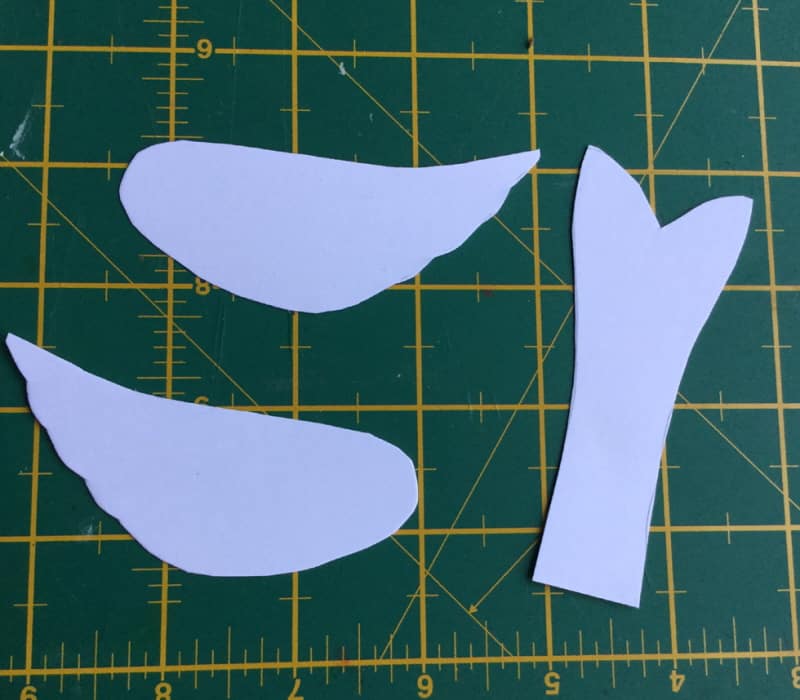 Then I made a short length of floristry wire into a loop to hang it by, poked a hole in the top of the second body shape and fixed it inside with tape.

Next I tucked the tail into the rear of the egg shape and secured that with more masking tape.

After that I positioned the top section of the body onto the base part and fixed it in place using strips of paper and paper mache paste. 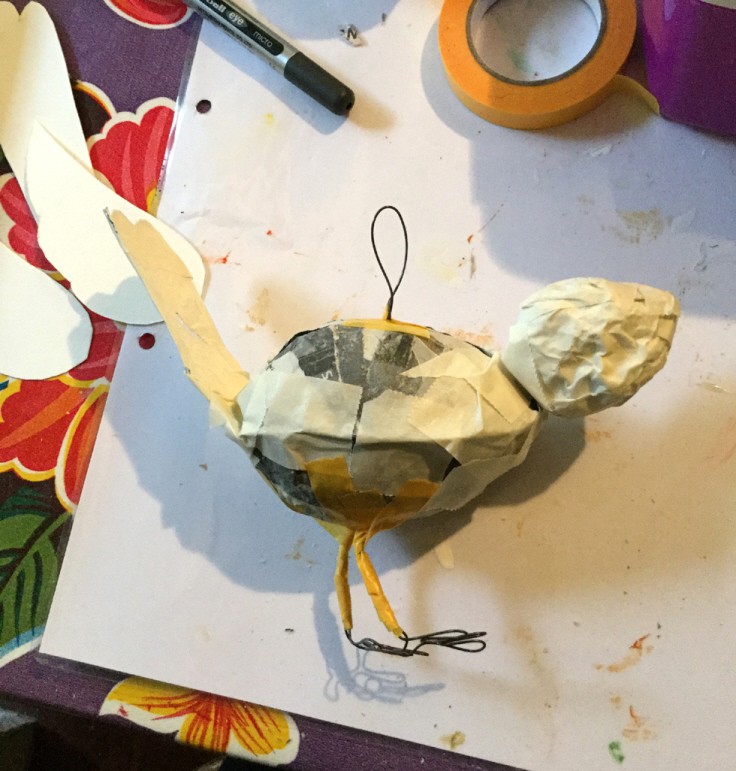 I added a little roll of aluminium foil to each wing with masking tape. 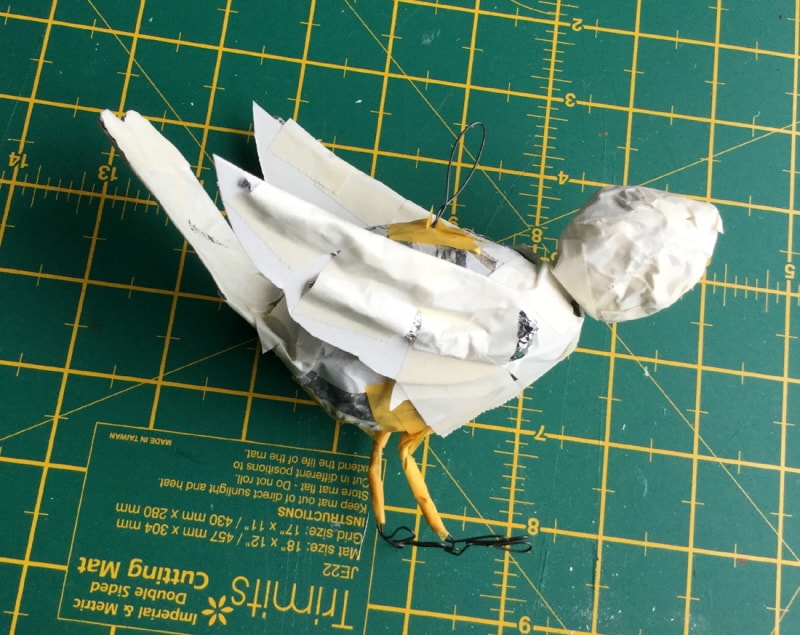 Next I mixed up some of Jonni’s New Paper Clay recipe and added that to the bird and had the idea of hanging the model on a banana stand as an aid as I worked. I added a small lump of clay for a beak and I also added eyes. 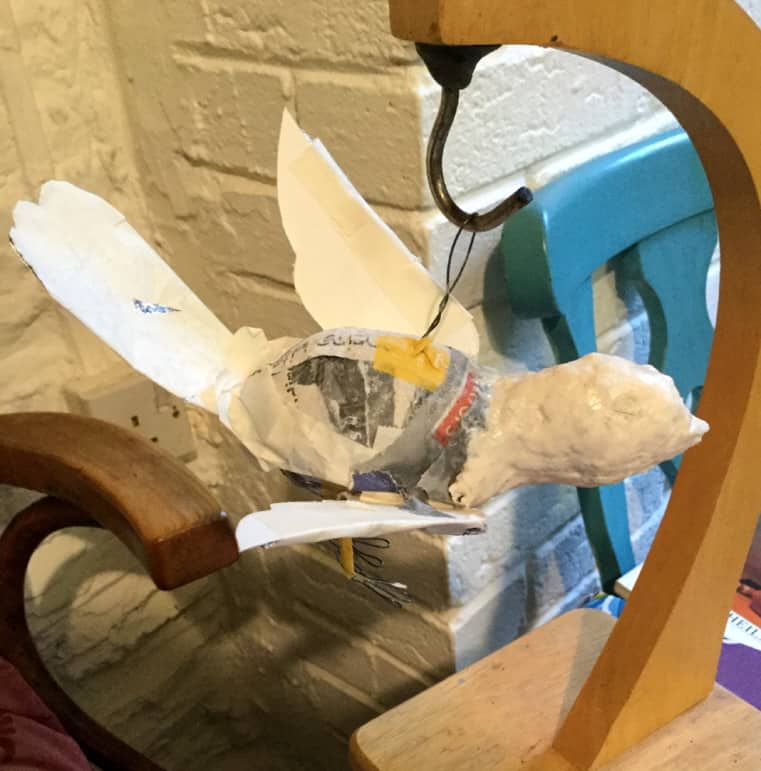 I continued adding clay and smoothing it out as I went and drying it overnight on top of the boiler. 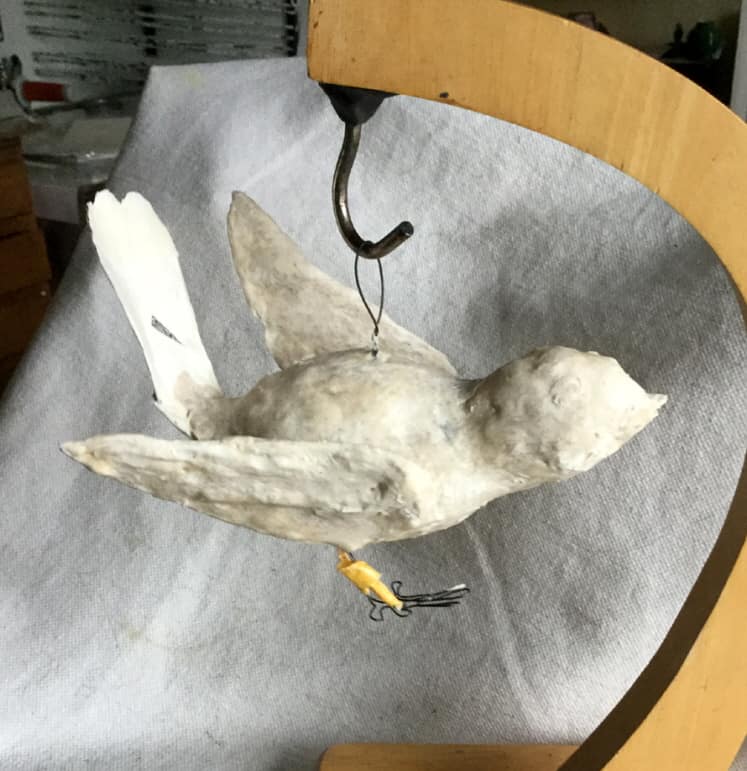 Once I was happy with it, I covered the bird with two coats of acrylic gesso and then painted it with acrylic paints using Satin Glazing liquid to help blend the colours of White, Ultramarine and Cobalt Blue

When it was dry I varnished it with a layer of Matt acrylic varnish. 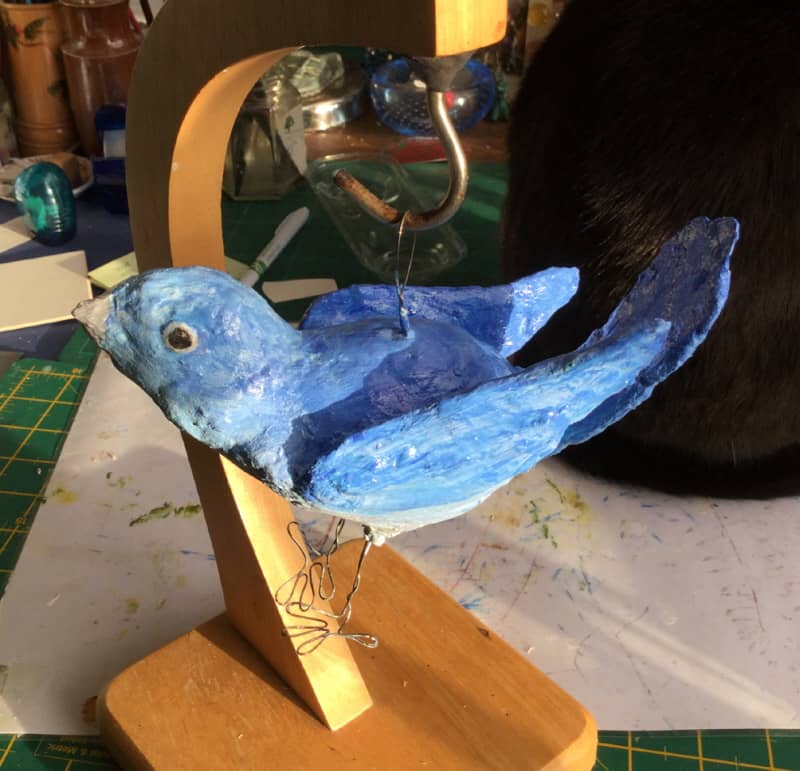