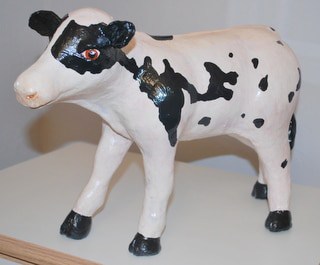 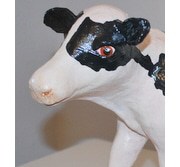 We have a real treat today. Rex Winn has been a good friend of this blog for a long time, and he’s shown us many of the piggy banks that he’s made. I’m very happy to say that he finally agreed to show us how he makes these delightful little sculptures. The bank in this tutorial is in the shape of a calf.

By the way, I’ll happily take credit for  sharing the idea of using patterns for animal sculptures, and for the paper mache clay recipe — but Rex is the one who came up with the idea of making a hollow sculpture with patterns and pm clay, and then using them for piggy banks. The pattern is all his, as well, and it’s very kind of him to share it with us. Now we can make one too, just in time for the holiday season. Thanks, Rex!

The process of making this piggy bank came from Jonni Good’s book, “Make Animal Sculptures.” The chapter that I used the most is Chapter 6, Piglet. Except, of course, the part about cutting it in half!

The first step was to transfer the pattern onto foamcore board (or cardboard). The photograph I used was a miniature toy calf and was printed on a grid created in WordPerfect. I decided the size of the bank and drew 3/4″ grids on the foamcore. (See illustration 1.) It is helpful to me to draw where the legs, eyes, and mouth are on the pattern.

Next I filled in the skull areas – the cheek, nose, forehead, and mouth – using aluminum foil covered with masking tape. I also added the tail. Next I filled in the lower part of the legs and put paper mache clay on them before adding the styrofoam on the upper leg. I did my best to make sure the feet were even on the table before adding the clay. I used one grid square on the front legs; one grid square graduated to one-and-one-half grid square on the back legs – the thicker part towards the front of the body. (See illustration 2.)

Hot glue was used to attach the legs onto the body. (Notice that all the feet are on the table. I worked hard to make sure they were! I wanted the calf to look like he was taking a step.) Then I filled in the rest of the body, working around the legs first and then the thicker part of the back and stomach. I covered the tail with masking tape. The calf has a piece of skin hanging from his throat, and I added aluminum foil, which you can see, for that fold. (See illustration 3.)

I added the ears, made from multiple layers of aluminum foil. I covered everything in paper mache clay except the ears, which get smashed a hundred times in the course of things! (Illustration 4.)

When the clay was dry, I cut the calf in half with a pull-saw (which I think works well for this process). In order to remove the insides more easily, I have learned to start the upper cut closer to the head and finish at the bottom closer to the rear. (Illustration 4a and 5.)

Next I pull everything that is inside out, except the foil attaching the ears and tail. The first time I did this, the process took me 4 hours. This time I used a heavy flat-nosed pair of pliers, and it took about 40 minutes. The mess looked like this (illustration 6). I think it also helped to use bubble wrap because it came out in clumps, although my dogs hates it.

After everything is removed, I make sure the inside is dry before putting it together. (Illustrations 7 and 8.)

Putting it back together takes some doing. I wrapped masking tape around the entire body enough to hold it together, and put masking tape here and there to hold the two halves together. Then I added clay on the cut body parts exposed between the tape. Masking tape does not stick well to paper mache, so I use a long enough piece to go around the entire calf. I added smaller pieces of masking tape here and there around the body. (When I did the Mohawk chick, I actually wired the body together, added clay between the wires, let it dry, and then removed the wire.) I tried to make “dents” when cutting the calf in half so I knew exactly where the pieces went together. The most difficult part was keeping all four feet even on the ground. I placed the calf on a pie pan while it dried. (Illustration 9.)

When it was dry, I began adding smooth air-dry clay. I need a better support system when putting the pieces together because you can see the right front hoof does not reach the ground. I added extra clay on the hoof, but in the end the hoof was a lot thicker than the other feet. (I wasn’t impressed.) (Illustration 10.)

After the air-dry clay was dry, I added gesso, trying to give hair texture to the calf. I added more joint compound to the gesso for this. Then I added a wash of Burnt Sienna. (Illustration 11.)

To make the black I used Ultramarine Blue and Burnt Sienna. I LOVE this black because the color can vary, which gives a more dimensional look to the animal. (Illustration 12.)

I make piggy banks for bills only, so the hole is small. The hole is on top of the neck in the black spot. I painted the hole black so it is difficult to see.  I make the hold using a Dremel tool – using a bit that looks like a drill but will cut sideways.

If you have any questions, I would be happy to answer them. One final comment: I love this process so much more than the balloon version. Balloons tend to expand or shrink depending on the temperature. I can’t say how many I have thrown out because the paper mache had collapsed. Besides making a more pleasing sculpture, the control using this method is great.

Thanks to everyone for their inspiration.

35 thoughts on “How Rex Makes His “Piggy” Banks”