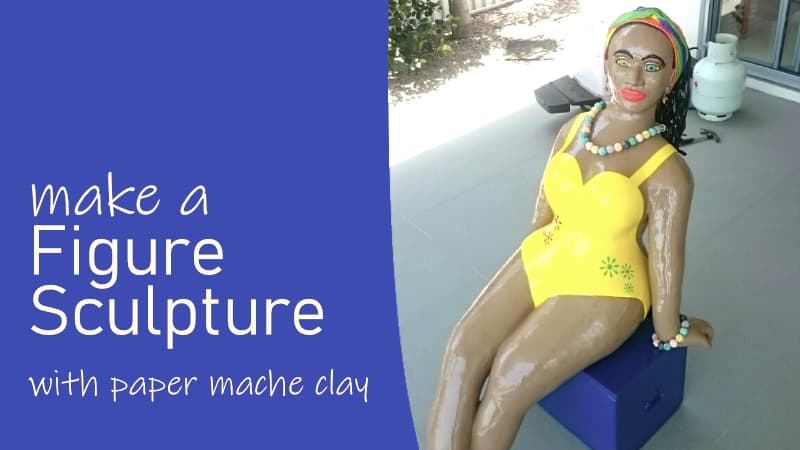 Today our friend Fran O’Meara shows us how she made a large paper mache sculpture of a lady in a swimsuit, using several inventive new techniques. Thanks, Fran!

Hello fellow papier mache enthusiasts. This is my first papier mache project and has taken 6 months to complete. My sculpture sits on the back patio and looks out over the canal where boats come by and are either intrigued or a bit shocked when they see her !!

I constructed an armature of aluminium for the skeleton which was secured with zip ties. I used my own arms and legs to make the limbs. I firstly wrapped cling wrap around my limbs then a layer of duct tape which I then cut down the inside of my arms and legs in a line then peeled them off, placed a layer of very fine chicken wire inside each limb along with newspaper, then secured the limb with duct tape. 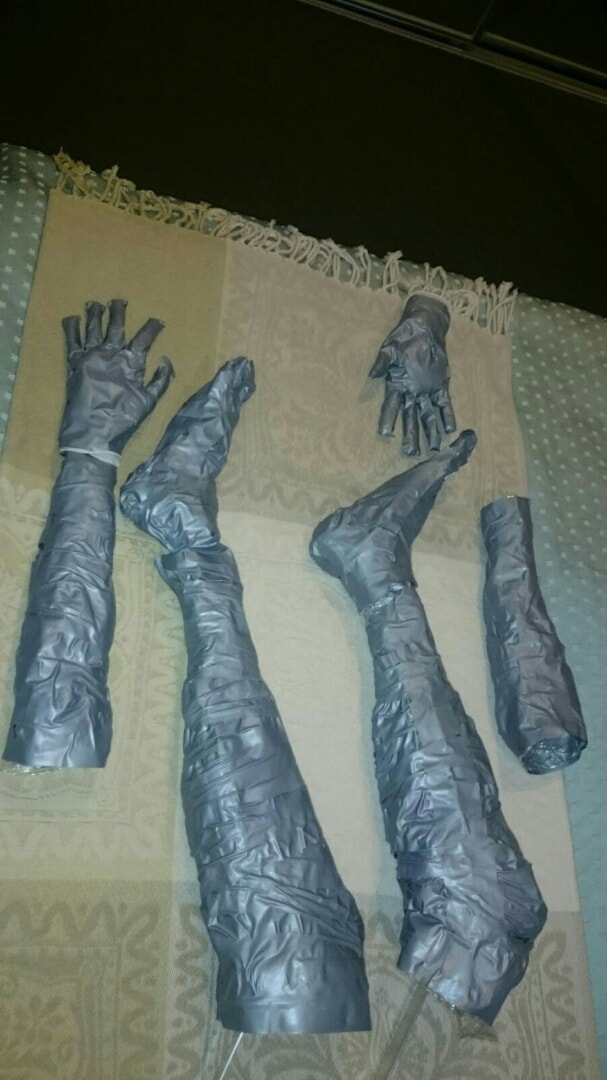 I made the feet and hands by using disposable gloves and covering them with a layer of duct tape then cutting the gloves off and taping up the opening. I shaped the finger and toes with fine wire wrapped in newspaper cut to the length of my fingers and toes and placed into each hole.

I then filled up the spaces with shredded paper then insulation foam and bent the wires into position for the fingers and toes to set.

Once the whole body was filled with chicken wire and crumpled up newspaper and taped together into a sitting position I then filled up any gaps with insulation foam. 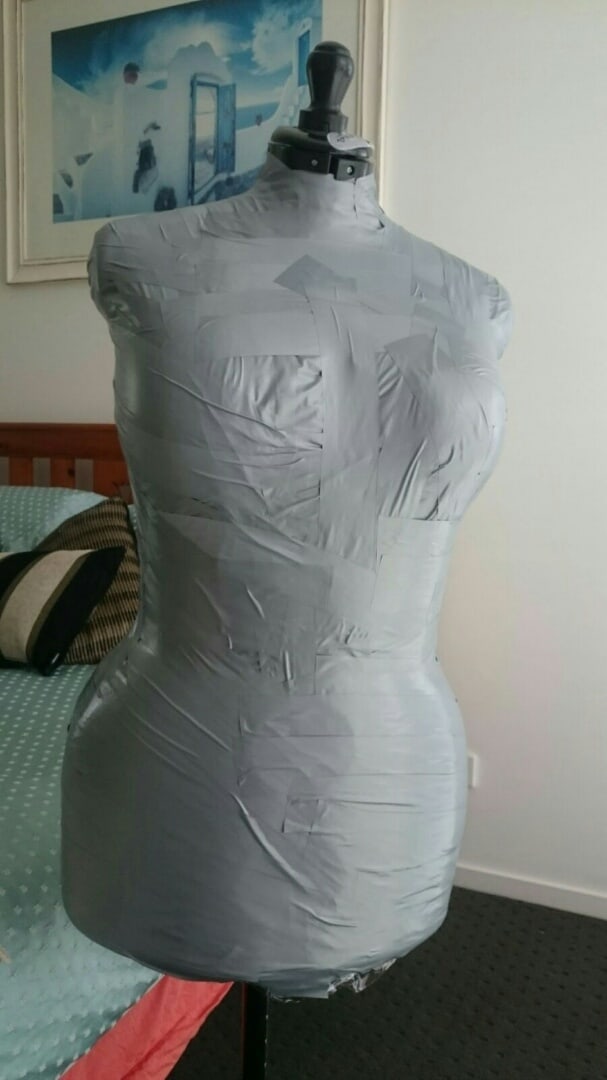 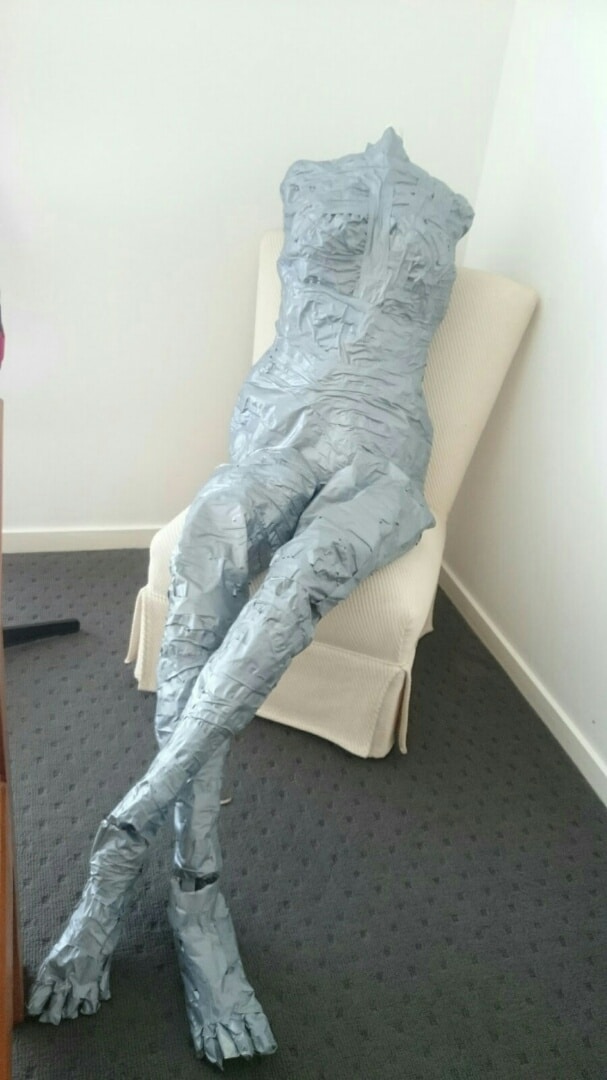 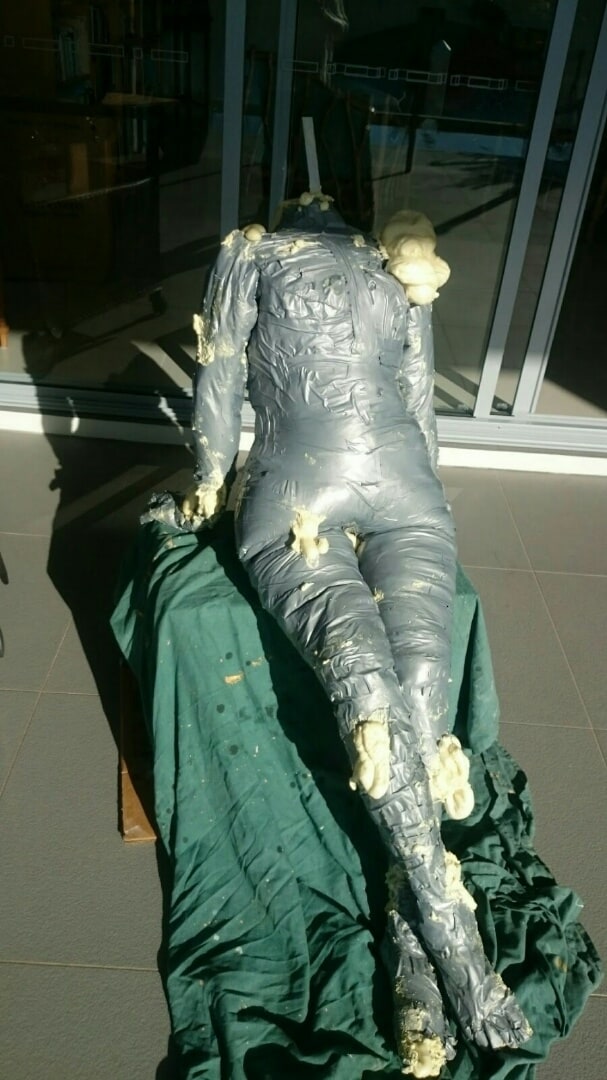 The next part of the process was to form her physique with layers of paper held on with painters tape. 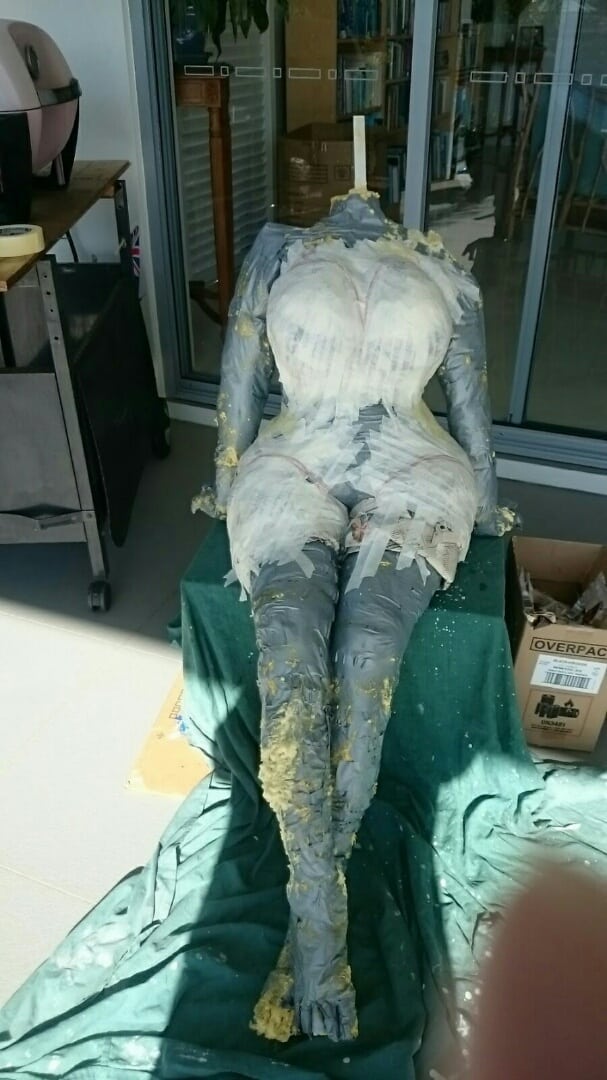 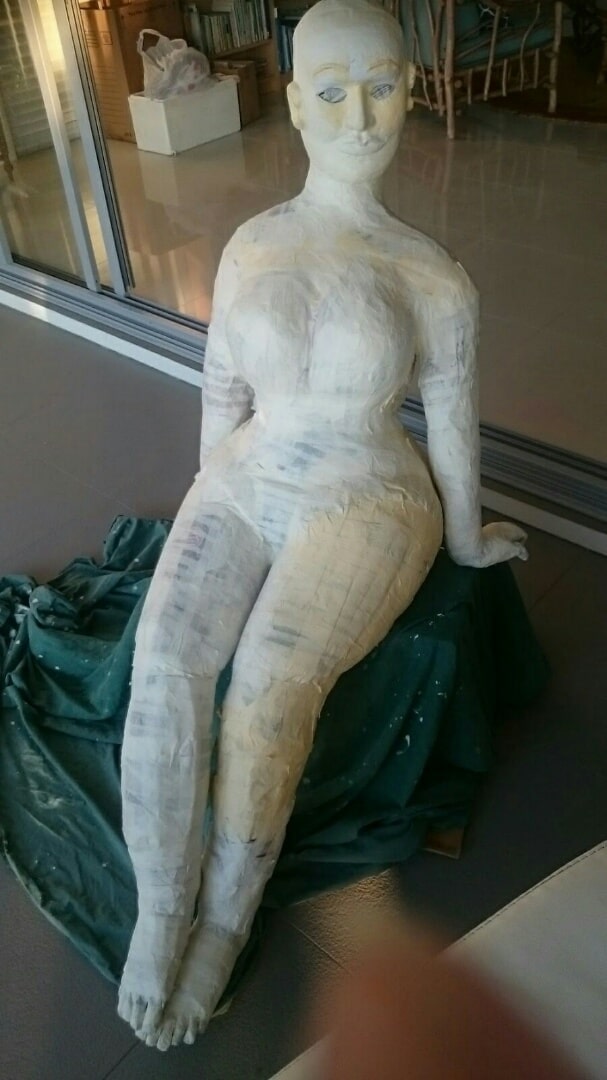 I then made up many bucket loads of Jonni’s fantastic Original recipe paper mache clay with the grams measurements which made perfect clay every time.

When sculpting the bathing suit I added an extra strip of clay to shape where the legs meet the bathing suit and the same at the chest and around the sides and at the base of the bathers. I then made long strips of clay for the straps of the bathers which were very difficult to blend into the existing clay but I got there with much perseverance. 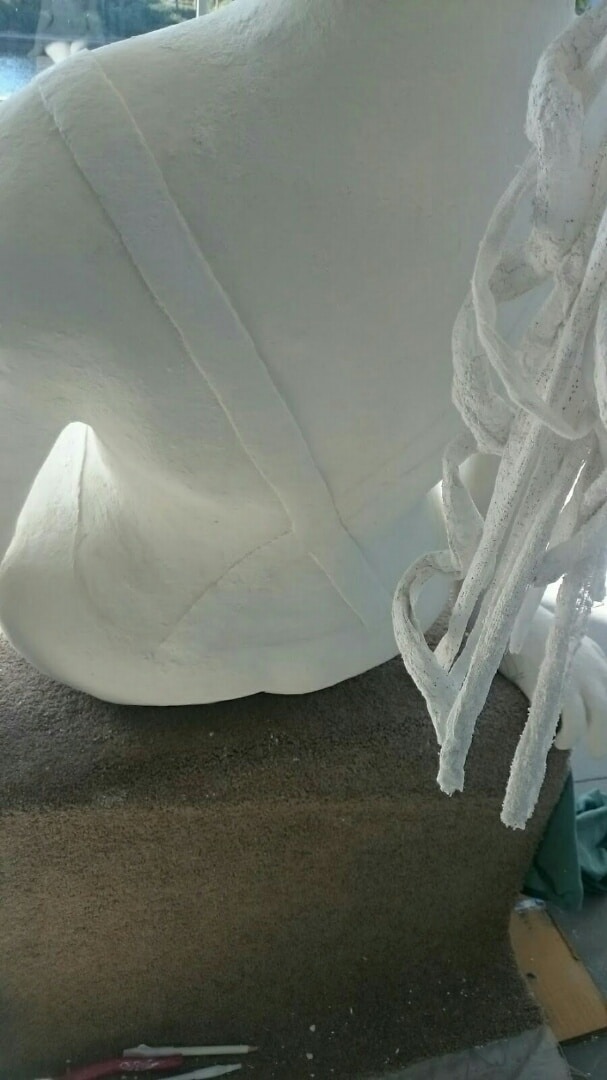 Once she was all covered in clay I plastered her in joint compound in sections and once they were dry I used a damp cloth and smoothed the compound. It turned into a beautiful smooth surface. I then painted Gesso all over her and then 2 layers of acrylic paint.

The head was made separately to the body. I made a huge ball of newspaper and held it together with painters tape to make the head. I then purchased a paper mache mask as a guide and then built it up with paper mache clay to the shape I wanted.

The mouth, nose and eyes were very small so I had plenty of scope to make the face that I wanted. 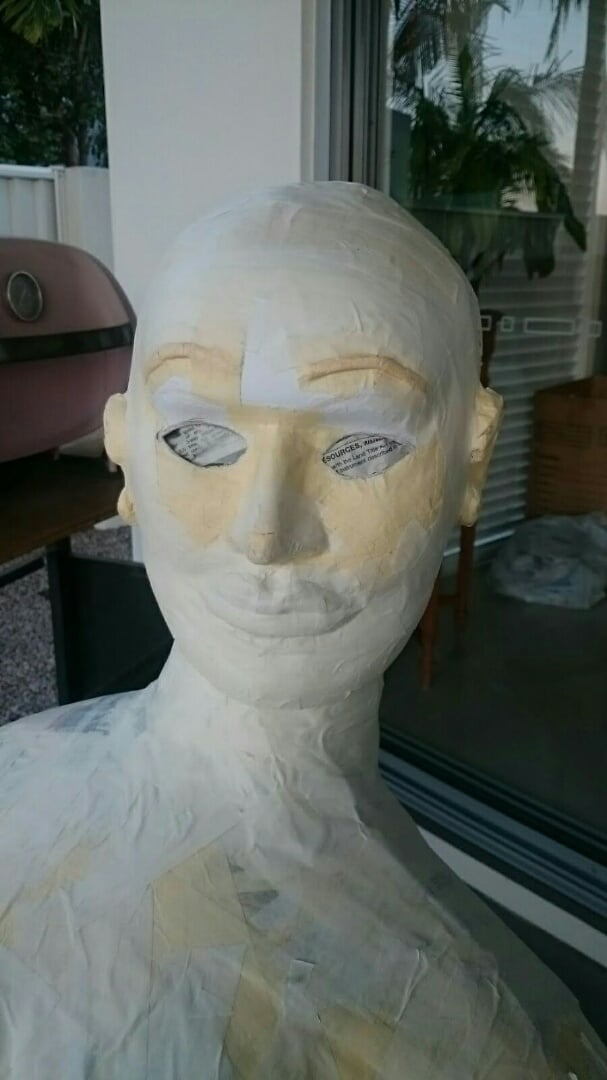 I researched how to make ears on YouTube videos and after many attempts got them pretty close to what I wanted. 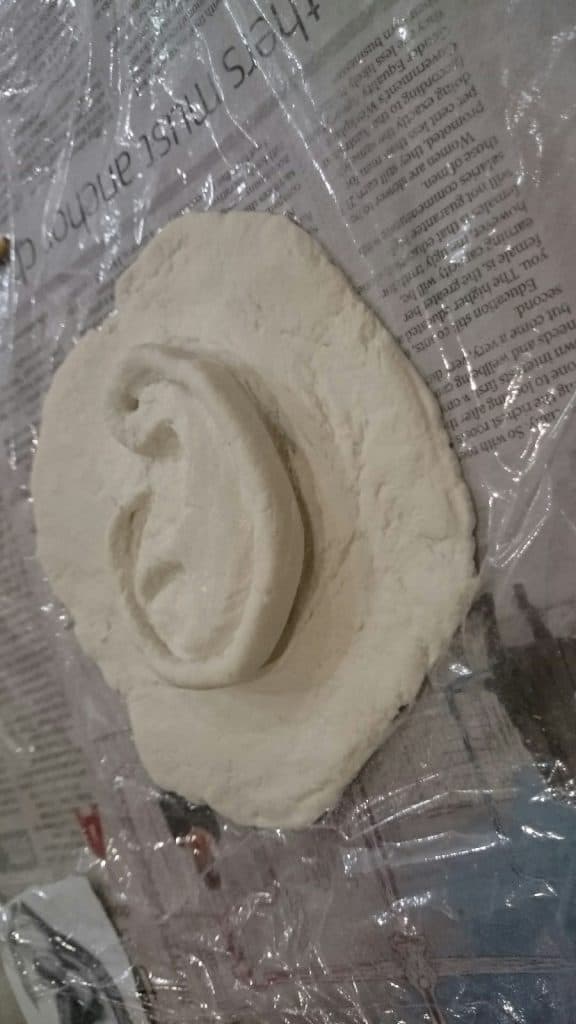 The eyes are made of resin and made by my son’s very talented girlfriend who makes resin jewellery. (For a closeup of the eyes, scroll down to see the last photo). I wanted one blue eye and one green. Just because I could !!

It was extremely difficult setting the eyes inside the mask so they would not move. I did so by firstly taping them in place with painters tape and then filling in around them with silicone. Once they were dry I scooped out two holes in my newspaper head and pushed the mask into place and secured with painters tape.

I then secured the head to the section of neck that I had made with the body with tape. The neck, head and face were then sculpted together with clay. The ears were secured to the sides of the head at the same time. 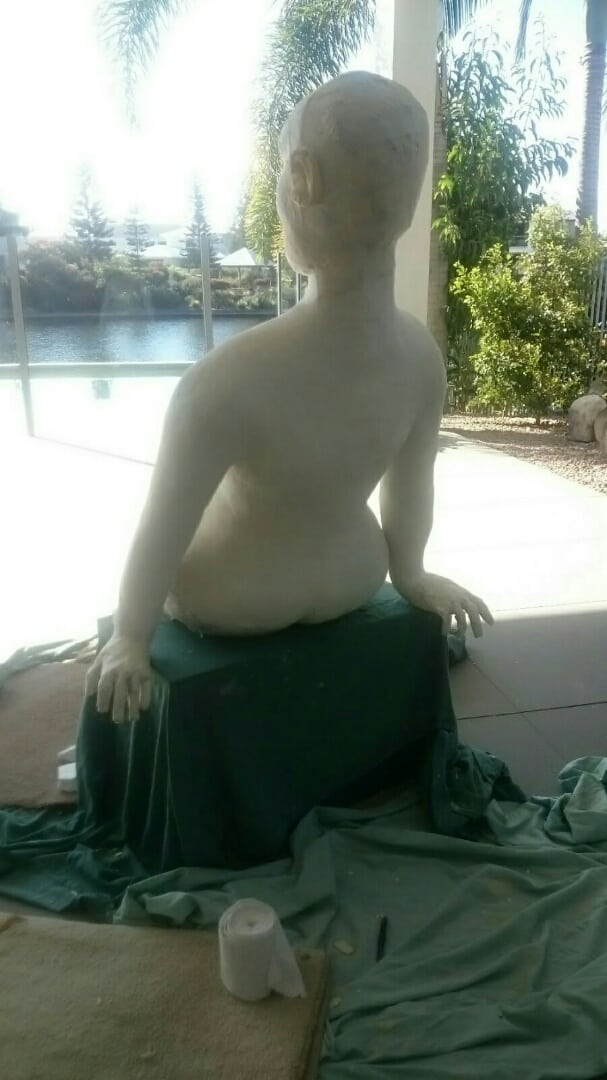 After her head dried I secured a hairnet onto her head which I had sewn on 42 individual dreadlocks which I made by wrapping newspaper around pieces of wire then wrapping wet plaster bandage around the paper and letting them dry. I curled some of them and the others are straight. 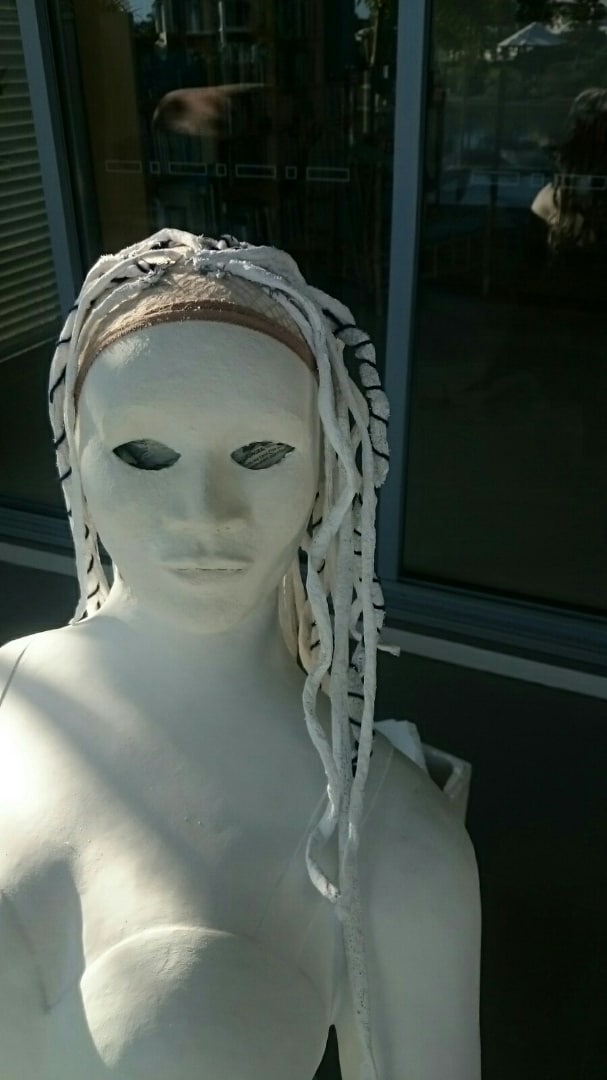 Once the hairnet was secure I put a layer of original paper mache clay on her head and shaped it so that it was along her hairline from the front to the nape of her neck in between the dreadlocks. I then used a bamboo stick and went all over her head turning the stick in tiny circles to make curls that sit close to her head.

Painting each of the 42 dreads twice was far from enjoyable but the final result was worth it. 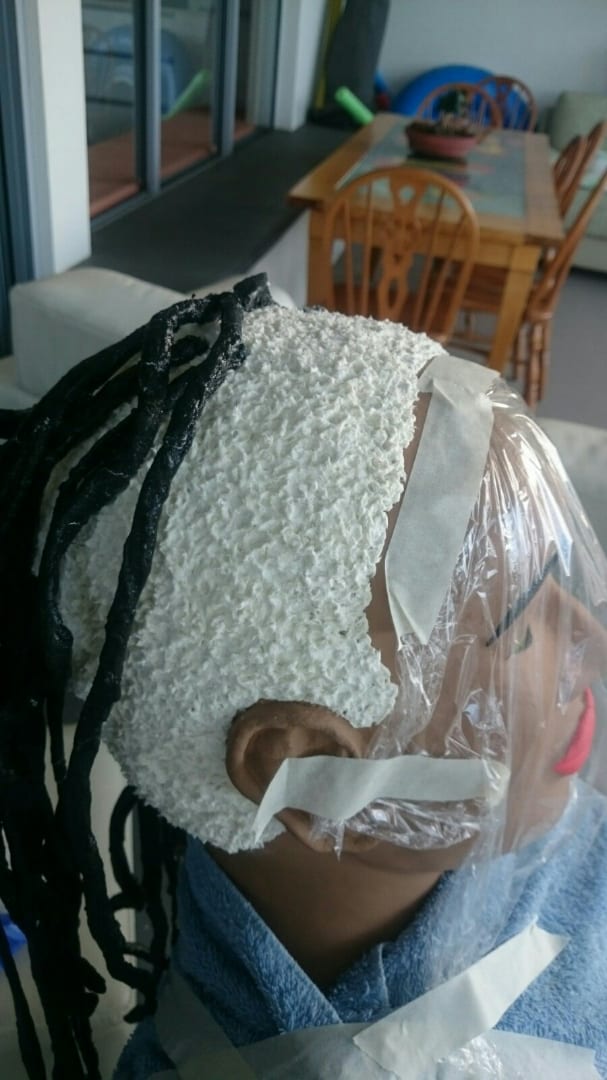 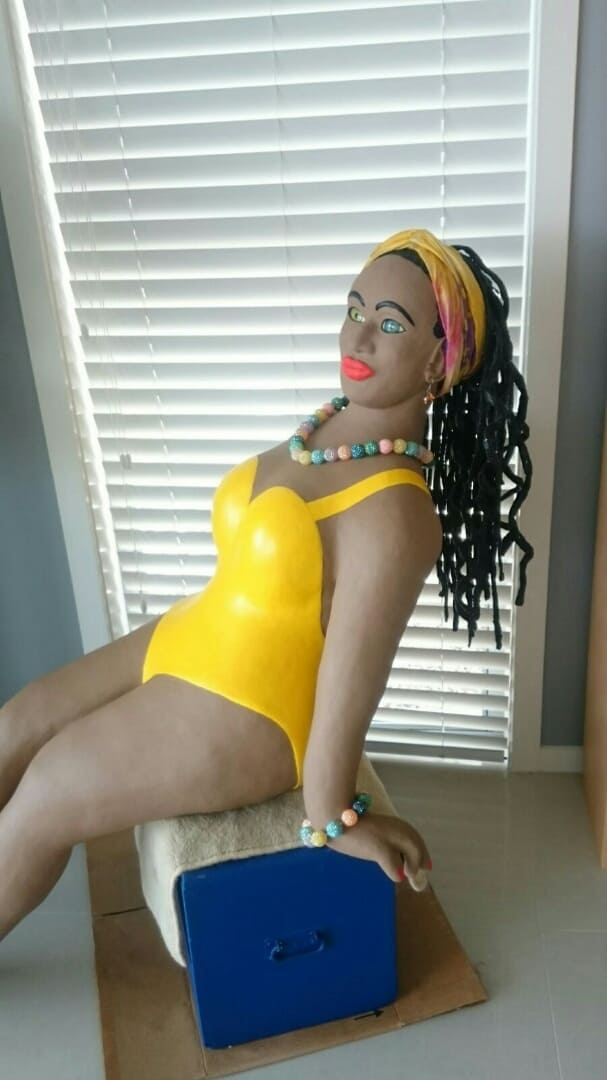 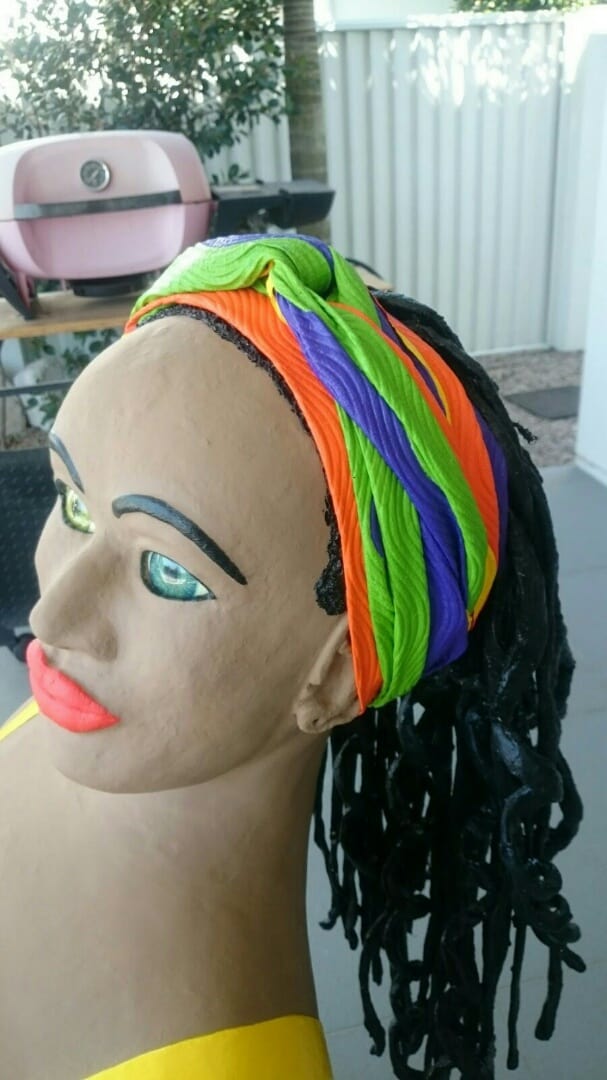 Because I want her to sit outside on our patio I painted her in an epoxy resin which will protect her from the elements. That was a challenge because resin is not forgiving. If you muck it up its not like paper mache where you can rectify a fault. 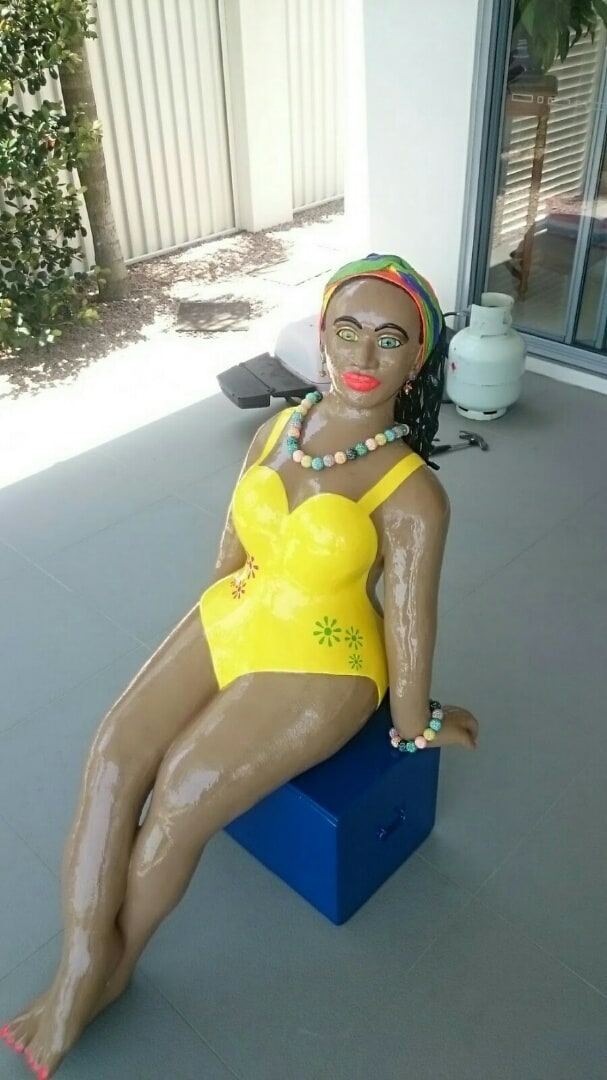 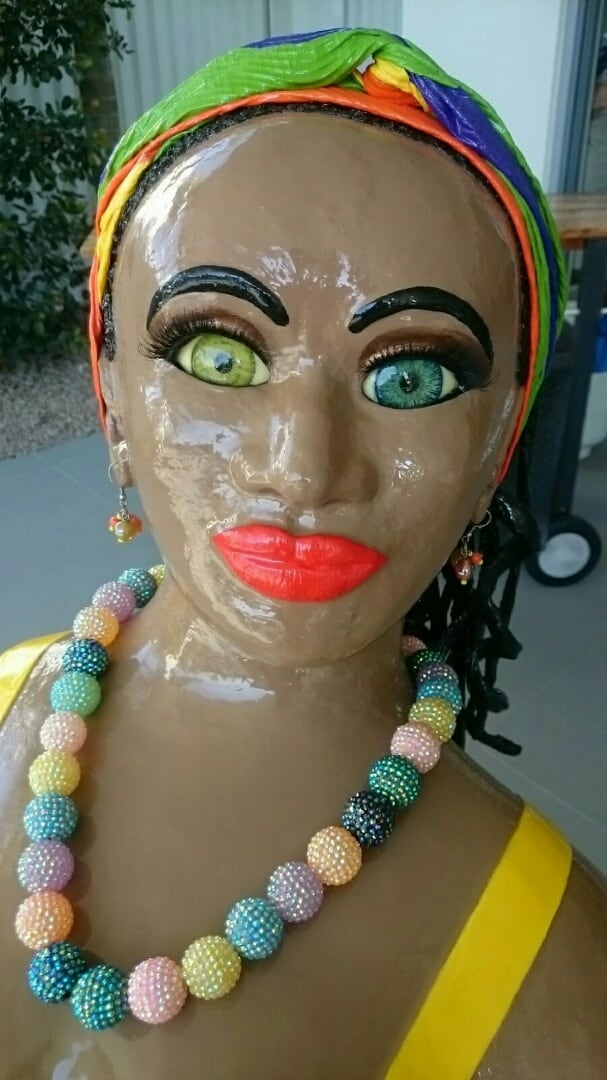 Anyway, I am very happy with the result and very proud of my achievement.

Apologies for the long explanation but I wanted to share the journey of how my lady came into existence.
Thank you Jonni so much for your expertise. I would never have had the confidence to tackle this project if I hadn’t read your website from beginning to end and also used your fantastic recipes. 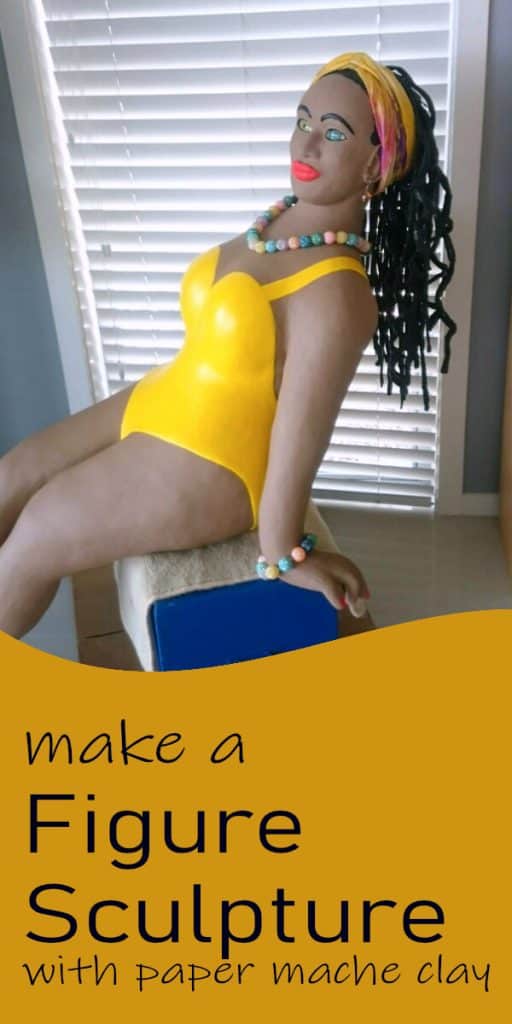