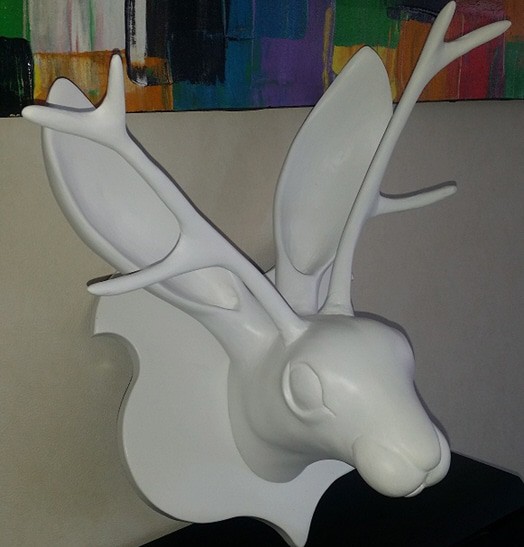 We  have another guest post by Basil Hammerton. In his most recent post he showed us how he made his amazing wall hanging of a Humpback Whale Family.

Today, he has something very different for us–how to make antlers for a jackalope faux trophy mount.

He used the 3D pattern of a jackrabbit from this site for the head, and then customized it to create the legendary jackalope.

If you grew up in the more open spaces of the West, like I did, you’ve seen lots of jackalope trophies, yet hunting the beast in the wild is almost as aggravating as a snipe hunt. Basil shows us the easy way to get a jackalope trophy for our walls. Thanks, Basil!

How I made my Jackalope Antlers.

This was really quite a simple process. They were basically made with wire, masking tape and gesso. I originally started making a pair by wrapping the wire in bubble wrap but found this to be too bulky as I wanted nice fine delicate antlers.  I will use these in a later project.

First I decided on size and shape, as I said delicate was the brief. I settled on a height approximately the same as the rabbits ears. Before I cut the wire I bent it to shape one half of the antler then continued on down the other side, then cut the wire. This avoided any wastage in the wire, I also allowed a little extra to use to push into the rabbits head helping to stabilize the antlers while the base of clay set.

Once the wire was bent I taped it together with masking tape, just at certain points for now in case I wasn’t happy with the shape. I then duplicated the process with the second antler , bending it using the first one as a pattern to get them both as close in shape as possible.

Once I was happy with them both I then went over everything again with tape filling out areas like in-between the two prongs at the top and in-between the single prong and main stem at the bottom.

Next I made sure to make a left and right one rather than them both the same. To achieve an even better shape I bent the wire so that the whole antler was slightly arched from top to bottom and slightly arched the prongs inwards as well. I think this can be seen in the photos.

Then it was the first coat of gesso. I drilled two holes in a scrap piece of timber (lumber) to stand them in while the gesso dried. This was a must as it made the whole process so much easier than trying to hang them up or the like. Once this was dry I applied another coat of gesso allowing that to dry also. I then checked them both for any irregularities, sanding back any high spots or lumps, that would spoil the look I was after then applied the final coat of gesso.

The last step was three a good sanding’s with  each one using a finer grit of paper than the one before it.  As the Jackalope was going to be all white I knew this would show any imperfections really well so a thorough sanding was critical.

To attach the antlers I drilled a hole in the rabbits head where they were to be mounted and inserted the extra bit of wire into this whole. Just a quick note here, I have found that the paper clay and gesso finish can easily be drilled as long as you are careful. Use a high speed drill with a drill bit as small as it needs to be. I ended up epoxying them in place with 5 minute araldite first so I could be sure they would stay orientated correctly, then put paper clay over this joint in the shape you can see in the photos.

All in all I was really happy with the outcome as was the lady I made the Jackalope for.