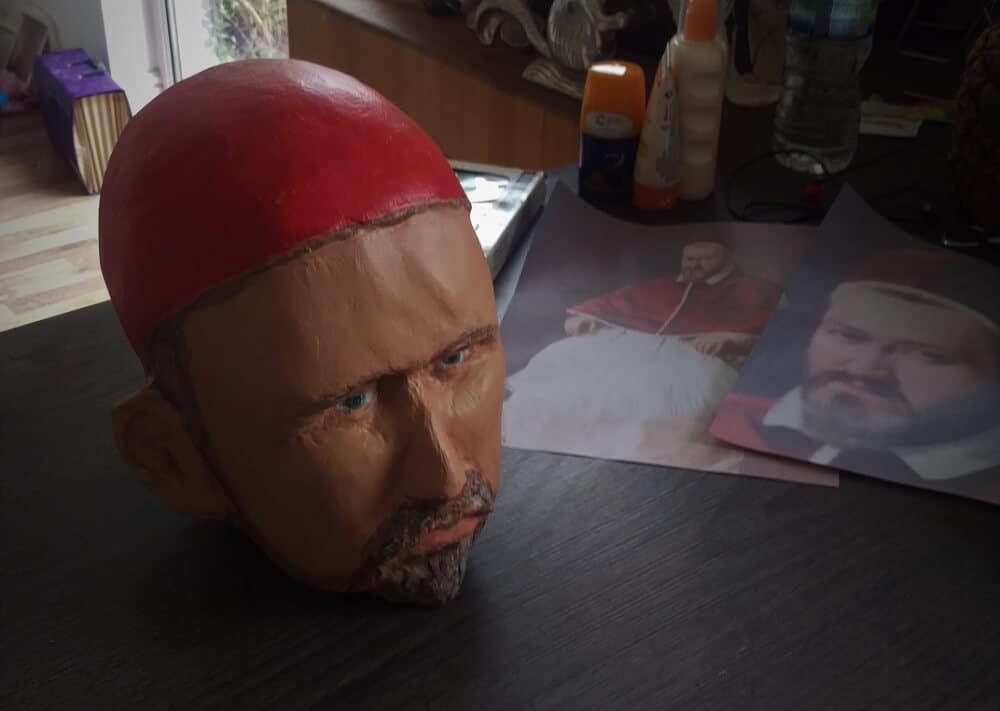 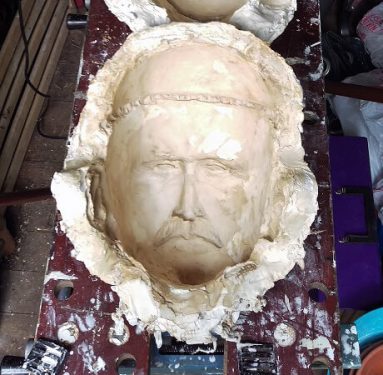 I got an email this week from Laurence Black, who shared the result of his experiments in using paper mache in a plaster mold. (Or mould, as they spell it across the pond.)

The sculpted portrait is beautiful, and if you aren’t British you may be shocked when you see what he intends to do with it when the entire figure is done.

He also answered a question that people have asked me before – can you use petroleum jelly as a release when using paper mache clay in a plaster mold? Be sure to read all the way through to see his answer!

I asked him to write up a guest post for us to show us how it was done, and he agreed. Thanks, Laurence!

POPER MACHE. Or how to make a paper mache Pope.

Jonni has kindly let me share my experiments in using PM with a plaster of Paris mould.

As you probably know, in England we burn an effigy of Guy Fawkes, a 17th century terrorist, on Nov 5th. I thought I ‘d better up my game this year as last year’s Guy was particularly unimpressive and didn’t take long to burn. Yes, those are toilet rolls…

This year I wanted to make my Guy as realistic as possible while still flammable. PM is the perfect medium.

I was disappointed to discover that there are no contemporary pictures of Guy Fawkes. Historically many people burned an effigy of the Pope. Luckily the Pope at the time (1605), Paul V, has about as good an image as it is possible to have as he was painted by Caravaggio and sculpted by Bernini. Nice! He was also the Pope that gave Galileo a hard time so I don’t feel too bad about burning him.

I started off by sculpting a clay head, using a Styrofoam head as a base to save weight, time and clay. I used pictures of the Bernini sculpture as a beautiful guide.

I made a clay wall and put it around the head from side to side around the back of the ears. I then smeared the head and wall with petroleum jelly as a release agent. I then covered the front of the mould with plaster of Paris. I did several layers, each strengthened with sacking, and made it over an inch thick. I marked the edge of mould with a sharpie so that I would be able to find the seam later.

When this was completely dry (24 hours), I removed the clay wall and cleaned the area of the plaster they clay wall had been against. I then smeared petroleum jelly around the edge then made the mould for the back of the head.

I left the mould to fully cure for 3 days then used a hammer and chisels to carefully break it open along the marked seam. I managed to save the clay face but nothing else. That’s okay, I could use the face later.

I then washed out the mould with warm water and a washing up brush to remove the remnants of clay.

Now it was time for my first fail. I put petroleum jelly on the back of head mould (I knew this part was experimental and didn’t want to risk the face yet). I made Jonni’s PM clay and covered the back mould fairly thinly. It dried quickly and I was amazed at just how smooth and strong it was. Unfortunately the smear of petroleum jelly didn’t work as a release agent and I could not get the bugger out. I eventually had to spent an hour chipping it out with a hammer and chisel and repair the mould. Oh well.

I now smeared petroleum jelly on both halves then used cling film. The petroleum jelly was there to get the cling film to stick. I then did traditional PM using wallpaper paste on both the moulds and the clay face as an experimental positive mould.

I did approx 3 layers at a time and left to dry for 24 hours before doing another 3. Eventually there were at least a dozen layers and I also incorporated a layer of cheesecloth for added strength.

In this picture the blue face is the one from the plaster mould and the newspaper face is from the clay face. The positive one is okay and would be much less bother, but doesn’t have nearly so much detail.

I joined the 2 halves together roughly by putting some duct tape strips inside and flopping half down. I then carefully lined up one side and stuck it, then closed the shell and reached inside and smoothed the other strips.

I then used a small amount of hot glue to firmly attach the halves. Then I PM’d over the seams until they were gone.

Next I used some ‘Polyfilla’ to smooth out some of the texture. Polyfilla is a British building product that is made from cellulose from the timber industry. This was important as this is made to be burned and I need something that both burns readily and is not toxic.

I sanded, smoothed, reapplied and sanded until I was happy.

I then painted it with a flesh coloured acrylic.

I then painted the rest with artist acrylics using the Caravaggio painting as a beautiful guide.

He does still have the rest of his body to go, but I have until November.

While I will be a bit sorry to lose him, I do have the moulds and the method so I can make one whenever I want.

Please let me know if you have any questions on the method in case I haven’t been clear.

27 thoughts on “How to Use Plaster Molds with Paper Mache”