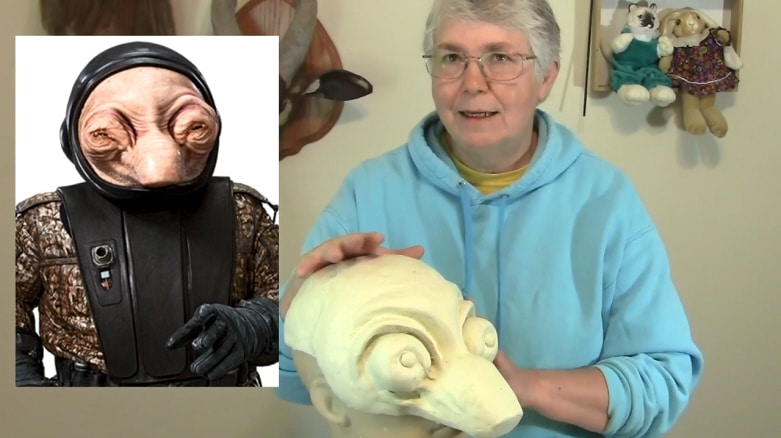 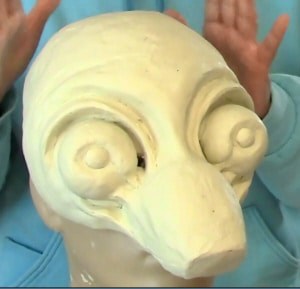 I started a new paper mache mask from Star Wars. I hope the movie studio doesn’t mind too much. Wollivan is an Interstellar scout who was seen in Star Wars Episode VII, The Force Awakens, according to Wookieepedia.

This is just the first step in the mask-making process – the paper mache will be next.

OK, I admit that I’m not a huge fan of the franchise, but only because all the fast-moving spaceships make me a little car sick. But this fellow – what’s not to love? He’s got the eyeballs of a chameleon and the snout of a tapir from South America. How fun is that?

In this video you can see over my shoulder as I put the clay onto the head form. In the next video I’ll add the shop towel mache, and then make the wrinkles with kitchen paper towels. Once he’s been painted pink, he’ll be done.

You can find my mask book here: http://goo.gl/McFp8L

And a lot of people have asked me where I found my head form that I’m using in this video. I ordered it from amazon.com – you can find it here: http://amzn.to/2dSHVkv

I put those two screws in the clay so I’d know where the human eyes are – you probably already figured that out, but I thought I’d mention it. And I used petroleum jelly over the plastilina modeling clay, which helps smooth the surface. It will also make it easier to get the dried paper mache off the form. I started with a five-pound block of the clay, and used almost all of it. When the paper mache is dry, I’ll be able to use the clay again for another project.

I like this clay because it’s soft and you can move it around easily. You wouldn’t want to use it for a finely-detailed sculpt that would be used for a mold, because it’s too soft for that. However, for this purpose, you don’t want too much detail. The paper mache would hide really small details, anyway.

Halloween is coming up soon – have you made your mask yet? If you have, I hope you’ll show it off in the comment section below.