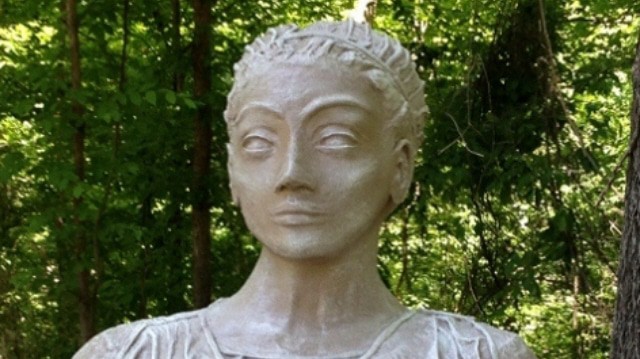 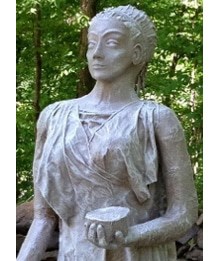 Today we have a guest post by Jackie Smith, who recently posted photos of her wonderful figure sculpture on the blog. She got tons of attention, and lots of people asked her questions about her process. She graciously agreed to write up a full post with all the details. Thanks, Jackie!

My name is Jackie Smith and I am from Grenada, Mississippi. I am so Honored to have been asked to be a Guest Post for Ultimatepapermache.com

Several other Paper Mache sculptors have been asking how I made this figure and how she came to be. I call her “Goddess Charta”. I am very new to paper mache and started with a frog that is probably about 20 inches tall. I looked back at the photos that I took of him and saw that I have only been making these fun projects since September of 2013. Yep…..a newby!

What made me decide to make her is that I wanted a large statue for my front yard. I could just see her in a large flower bed but when I started pricing concrete statues, the price made me start thinking about the possibility of making her myself. I didn’t know if I could accomplish any of this but just just dove right in and kept working on her until she was finally complete. First of all, before I ever started, I searched the internet for Greek and Roman Goddess’. Most of what I found, they were very masculine with helmets, shields and some had body armor which is not the look that I wanted. I found two that were suitable so I used them as a “go-by”. I used parts from the photos of each to build my Goddess. I spent a lot of time in my work area just sitting and starring at her and trying to figure out what is the next thing that has to be done. I made mental pictures of how I wanted her to look and using two photos as kind of a guide, I tried to do the easiest way possible.

Another question was how did I get started making this Goddess. I began making her from her feet and upwards. I traced my own feet onto a sheet of paper, cut is out and taped to a wooden board. This showed me where to fill in with crumpled paper. I made her feet with crumpled paper except for the upper foot and toes. For that, I used the air dry clay. Next, I used cardboard oatmeal boxes for the legs. I used small boxes stuffed with paper to fill in between the legs and Wal-Mart plastic bags filled with paper to form her lower body and skirt. In order to form the skirt, I wrapped the the bag of the whole lower body with sheets of paper and taped everything really well with lots of masking tape. From there just kept working up the body.

Her upper body and neck. I used a cardboard peanut can for her neck.

She’s beginning to take shape now. The cardboard peanut can had to be cut down a good bit in order to get the right size. This is the $4.00 Styrofoam head that I found at a local store which turned out to be too small for the rest of her. The styrofoam head is just for filler so I built on top of the styrofoam. I used my husband’s tin snips to cut through the thicker cardboard peanut container. Regular scissors would not work very well.  I also used paper strips with the flour and water to cover the styrofoam thinking that the clays would adhere better.

I used the air dry clay on her face and some of her hair. This picture of part of her hair is crumpled paper and taped to the back of her head and covered with the paper mache clay. For her clothes, I used paper shop towels dipped in the flour and water mixture and then draped them on her while they were wet to form the right folds and lengths.

Her arms are crumpled paper but I did put one strand of wire in her arms for more support. Her bowl is paper strips and flour and water to form it and then stuffed with more crumpled paper. I also closed the bowl because I didn’t want it to catch any rain.

I have added the hair with air dry clay and reworked her eyes, mouth and nose several times until I was finally pleased with it. Boy, her expressions and features changed a bunch of times! haha I am finished building her now and covering her with the first coat of the “Thin Set”. When it dries, the color is much lighter. Also after it is dry, the outer coating is very stiff or firm.

She has a ponytail which you really can’t see very well. I used crumpled paper to form a base for her strands of hair. I used strong paper towels dipped in the flour and water mixture and just twirled the strands and attached each one to the base. I used paper strips and the flour/water mixture to hold each one in place. This picture, i have already covered her with the thin set. Her ponytail took 2 or 3 days to completely dry and become stiff and rigid.

She is completely covered with “thin set” which is a type of cement that they use to install ceramic tile floors.  It’s like cement meaning it is a dry powder with sand in it. You just add water which I did to make it thin enough that I could use a paint brush and cover her with it.

After the thin set dried, I used and exterior Latex paint on top of that in one color. I used a much lighter color to highlight the top layers and tried to leave some of the dark in the creases and fold over her whole body. With the lighter color, I used the dry brush technique. The final coat or several coats is with spar urathane.  My local paint store said that the difference in polyurethane and Spar urethane is that polyurethane will eventually crack. So, she has three different products to seal her from the rain.

Just out of curiosity, I put her on the scales to see what she weighed. She weighs 22 pounds and is a little over 4.5 feet tall.

Now that she is finished and in the garden, when I look at her, I am amazed that I built her. No forms and no help but me and her…got it all worked out and complete.

When you decide to make something, just be sure to think through all the steps before you do anything.  You can do this too if you only try!!!

64 thoughts on “How Jackie Made Her Outdoor Figure Sculpture”