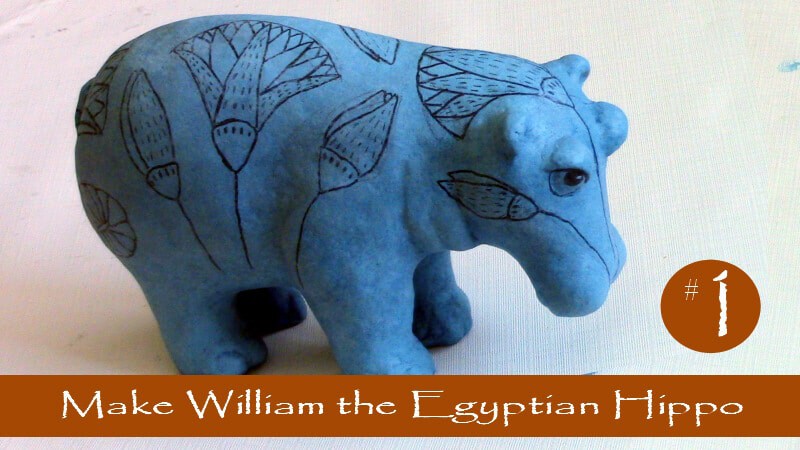 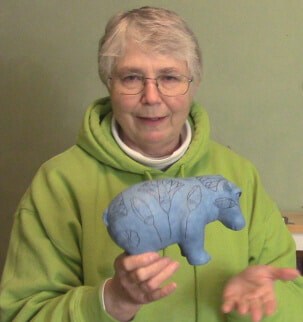 I’ve been hard at work this week making a copy of William the Egyptian Hippo. This project was recommended by our friend Bryan Divers. I have to confess that I’d never heard of this little blue hippo until Bryan mentioned it to me, but now I’ve fallen in love with this little fellow.

I used the basic techniques found in my book Make Animal Sculptures with Paper Mache Clay, with a few minor variations. You know I can’t work on a project without experimenting at least a little!

The only difference in the armature is that I used crumpled foil instead of crumpled paper to fill out the form. I started with paper, but the cheap masking tape I bought was so awful that I tore it all off and started over! There are more experiments (all successful this time) when I got to the paper mache clay and the final painting. I’ll tell you about those in the next videos.

The one thing you really need to do before even starting this project is to go find as many images of William as you can find. William has fairly simple shapes, thanks to the original artist who created him over 3,500 years ago. If you look at the photos while adding your crumpled foil (or paper if you’re sticking with tradition), instead of just relying on my video, your final sculpture will come out better. You always want to use as many source photos as you can find.

However, be sure you’re looking at photos from the same sculpture! It wasn’t until I started painting my copy of William that I discovered that the blue hippo that Wikipedia called William is not the same hippo as the one currently displayed at the Metropolitan Museum of Art. I thought it was pretty funny, myself – I’ve been working with an ‘imposter’ all this time. But it also made my final hippo more interesting – he has the lotus flowers from the Met on one side, and from Wikipedia on the other, and I like it!

Also, be sure to read the article about the blue hippos on the Met’s website. William starred in a children’s book back in the 1930’s, and a lot of toys have been created that look like William – but he was not considered a cute and cuddly creature by the people who lived with hippos in the Nile River valley. Read the article to find out why. (That’s also the best source for photos, if you would like your hippo to look the same on both sides. 🙂 )

In the next video I’ll show you how I added a paper-thin layer of paper mache clay to the armature, and made it really smooth. 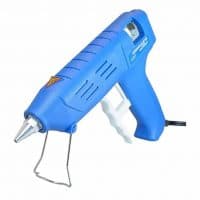 A few people have asked me where I got the big glue gun that I used to stick the foil together on this armature, so here’s a link to it. I bought it three years ago from amazon.com. It gets really hot, so be careful of your fingers if you get one – but the glue sticks are huge so you don’t have to stop and replace them nearly as often as you do when using one of the smaller craft glue guns.

And, in case you’re wondering how he came out after the armature, the paper mache clay, and the final painting, here’s William, the Blue Egyptian Hippo:

If you make your own copy of the Met’s William, the Blue Egyptian Hippo, be sure to come back and show him off here on the blog. We would love to see how it turns out!