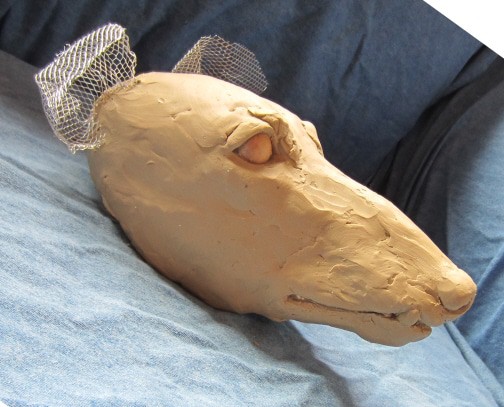 This week I have proven conclusively that you really can have too many projects going at once. However, I’ve still made time to work on Harry’s mask, and I’m starting to like the way it’s coming out.

Harry looks like a fellow with a great sense of humor, (but we haven’t met, so I could be wrong. He might be the quiet, studious type, in spite of appearances…)

To capture the profile, I started with a thin line of clay over the center line of the mask form that I made previously, and then superimposed a photo of the mask-in-progress over a photo of Harry. (I think “Bmaskmaker” first suggested this idea.) It was a bit tricky, because even the slightest change in the angle of the photograph can make a really big difference in the shape of the outside line. (I added a copy of the overlaid photos in the gallery below, so you can see how it was done). I have the Serif PhotoPlus program, which works pretty much the same as Photoshop. I kept changing the clay and taking photos until I was happy with the profile.

After the profile was set as close as I could get it, I started adding more clay to the mask form. The clay is still pretty rough, and I’ll be working on it for several more days before I commit to the paper mache. I’ve also sent an email to Nancy asking for her feedback, since she’s the one who knows Harry best. She provided some fantastic photos, but it still isn’t the same as knowing Harry personally.

By the way, the previous idea I had about making some teeth for him out of Super Sculpey didn’t work. Some ideas really sound good before you actually try them…

So far, this is what we have – I tried to take photos from the same angles as the photos of Harry, but they’re not quite the same. Still, I think you can get the idea. As always, suggestions are appreciated:

In case you’re curious, the ears are made with 1/4 inch Amaco WireForm Metal Mesh. I’ll be removing all the clay from the finished paper mache mask, but the wire mesh will stay inside the ears and reinforce them. In case you’ve read my book How to Make Masks! or if you’ve seen my mask-making videos, you probably noticed that I’m not using Super Sculpey as my modeling clay. I decided that the translucent Caucasian color of the Sculpey would make it too hard to see the forms in a photograph – and since this is a long-distance project and Nancy can only see the progress of the mask with photos, it seemed like a good idea to use the grey modeling clay instead. Sculpey is a lot easier to use, for a lot of reasons, but for this project I decided against it.

One real benefit of taking photos is that it gives you a chance to see a sculpture with fresh eyes. It’s much easier to notice things that aren’t quite right, but that I couldn’t see while working directly in the clay. I can now see that one of the eyes needs to be moved just ever so slightly, and the top ridge line of the muzzle needs more work. I’m sure I’ll find more things to fiddle with as I work on him some more.